Holiday movies with a queer twist 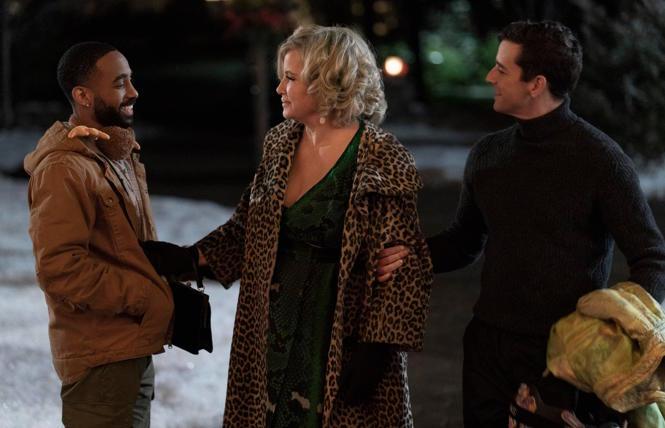 Philemon Chambers, Jennifer Coolidge and Michael Urie in 'Single All the Way'

If anything proves how mainstream the LGBTQ community has become, it's the advent of queer-themed made-for-TV holiday movies. Last year Lifetime offered The Christmas Setup, a wholesome rom-com about Kate (Fran Drescher) a well-meaning mom who tries to set up her son Hugo with Patrick, a family friend who just so happens to have been Hugo's secret high school crush. Hugo and Patrick were played by real life gay married couple Ben Lewis and Blake Lee.

These incredibly attractive guys find themselves irresistibly drawn to each other, only there's one problem. Hugo has been offered a big promotion at his job. He wants the promotion, which would necessitate his moving to London, but he also wants to be with Patrick. What are the guys to do?

This good-natured if fluff-filled film was not unlike other romantic comedies seen on Lifetime, known as the network for women (and gays). The Christmas Setup was well received by audiences and critics alike (it can still be streamed on Amazon Prime) and ensured that more gay holiday movies would follow. Here are a few of this year's offerings.

Christmas At the Ranch
The very network that this film is seen on is a groundbreaker. Tello Films is a streaming service dedicated to telling stories for women. It's an idea whose time has come.

Christmas at the Ranch is a sweet and wholesome film, a movie that lesbian couples can watch with their kids. The film's story is simple. High-powered San Francisco techie Haley (Laur Allen) is called home to the ranch where she grew up because the ranch, which has been in the family for many years, is in serious financial trouble and may have to be sold.

Once there, she finds herself drawn to ranch hand Kate (Amanda Righetti), a woman with whom she once had a disastrous blind date. The film's screenplay poses two questions: can the ranch be saved, and will Haley and Kate find their way to each other?

Both leads are easy on the eyes and look great together. The film gets an added boost from co-star Lindsay Wagner (The Bionic Woman) who plays Haley's grandmother. Wagner has kept a low profile of late, so it's nice to see her working again.

The film won't appeal to anyone looking for an edgy, groundbreaking film, but if a family film with lesbian leads sounds exciting to you, then Christmas at the Ranch may be what you've been waiting for. www.tellofilms.com

Single All the Way
Michael Urie, recently seen in the acclaimed Swan Song, is absolutely adorable in this simple but sweet rom-com. Urie stars as Peter, a 30ish, perennial single gay man in Los Angeles who's not all that enamored with his life. When he goes home to New Hampshire for Christmas, Peter convinces his best friend Nick (Philemon Chambers) to accompany him and pretend that they're now in a relationship.

Peter's family are a loving bunch who yearn to see him settled down. When his mom (Kathy Najimy) sets Peter up on a blind date with the rugged, handsome James (Luke MacFarlane), things get a little complicated.

One of the most delightful aspects of this film is the fact that all three gay characters are played by actors who identify as gay in real life, and all are out. The other delicious aspect of the film is the casting. Najimy of course is a well-known character actress, beloved for her role in the now classic Hocus Pocus. She's also a staunch community ally.

Peter's dad is played by Barry Bostwick, also known as Brad in the legendary Rocky Horror Picture Show. And comedian Jennifer Coolidge, who can always be counted upon to bring in some laughs, steals a few scenes as Peter's Aunt Sandy, who directs the local Christmas pageant in New Hampshire.

All three gay actors are easy on the eyes. Urie and Chambers have great chemistry together, it's obvious from their first scene that they belong together. The film is as wholesome as anything produced for the Hallmark Channel, which is why it works. 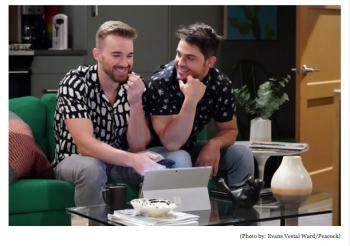 Chandler Massey and Zachary Atticus Tinker in 'Days of Our Lives: A Very Salem Christmas'

Netflix broke new ground with Single All the Way. Chambers is a Black actor making his feature debut. His race is never mentioned in the film, he simply is who he is, Peter's best friend turned soulmate. When Peter and Nick finally kiss, they really look like they're in love.

Days of Our Lives: A Very Salem Christmas
Soap operas are also bringing on some queer cheer. Chandler Massey, who plays one half of gay couple Sonny and Will on the long-running soap Days of Our Lives, co-stars in this one-off Christmas movie made especially for Days fans. Zachary Atticus Tinker will appear as Massey's husband. The film will follow long-running Days character Will (Massey) as he writes a screenplay before his Christmas Eve deadline. Using a variety of feel-good holiday tropes, he creates a Christmas story based on his family and friends in the town of Salem, which promises to offer several twists and turns. It begins streaming December 16 on Peacock. 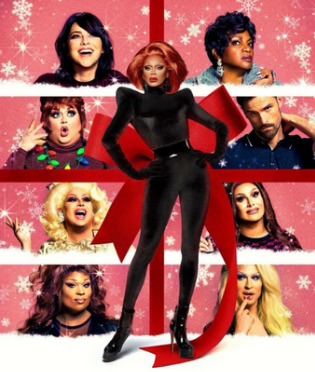 The story follows a workaholic big city fashion journalist who is sent to a Christmas-obsessed small town to dig up a story. There she finds herself in the middle of cutthroat housewives, a high stakes Winter Ball competition, and a sinister plot that could destroy Christmas forever! "There are 1000 Christmas movies this year, but only one with drag queens! Christmas will never be the same!" says Barbato. The B airs on VH1.

The Jinkx & DeLa Holiday Special
Two drag queens can't seem to agree how to create a Christmas TV show. With the help of a chorus of dancers, and also with the help of BenDeLaCreme's dead grandma (whose spirit lives on in a glass of eggnog), DeLa tries to uphold the Christmas traditions of her youth. Jinkx Monsoon, on the other hand, is far more interested in naughty jokes and booze.

The show, a new filmed version of their popular live show, is chock full of musical numbers about everything from Santa Claus to the baby Jesus, and it all leads up to a battle for control of the show. The pair eventually learns, with the help of a mysterious naked man who harbors a holiday secret, that tradition is whatever we make of it, and family is whomever we choose.

Holidays are a (fun) drag with BenDeLaCreme & Jinkx Monsoon
Sign up!