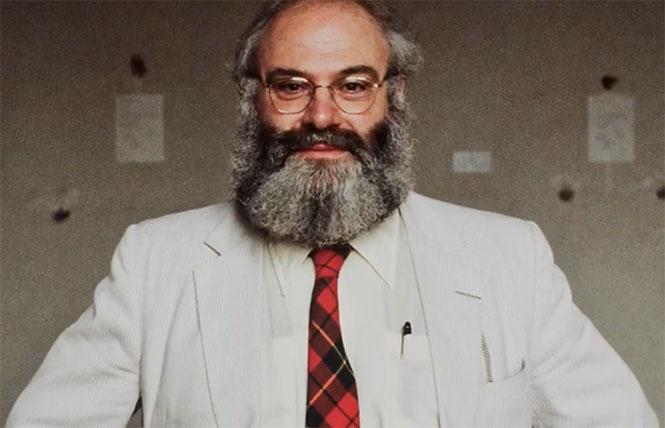 In director Ric Burns's press comments on his new documentary, Oliver Sacks: His Own Life, he summarizes the legacy of the renowned gay neurologist and best-selling author:

"Virtually every issue of importance about what it means to live a life and to be a human being, was concentrated in Oliver's unusual life story: survival, beauty, art, science, storytelling, love, individuality, difference, dignity, autonomy, agency, wonder, language, meaning, consciousness, community, friendship, yearning, loss, and connection with something larger." 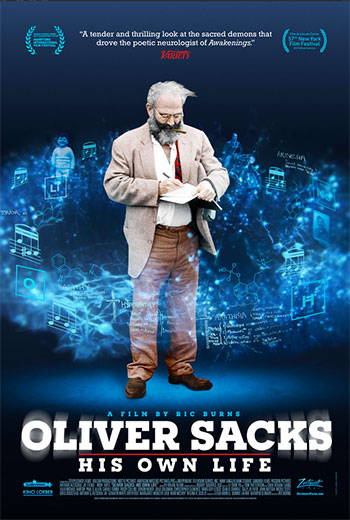 The film succeeds splendidly in its mission statement, such that even if audiences have never read any of Sacks's books, they will be amply rewarded spending time with this gracious articulate raconteur and exceptional human being.

The feature is largely a series of marathon filmed interviews, 80 hours across five days, with Sacks in his New York City apartment, a few weeks after completing his autobiographical memoir (On the Move) and after having received a fatal diagnosis that a rare cancer had returned, giving him only a few months to live.

Surrounded by his notebooks of sixty years, he ruminates about his life and work narrating what it means to be "a sentient being on this beautiful planet," and "what's needed to be said before I die."

Sacks, born 1933, in London, a privileged Orthodox Jewish upbringing, the son of two physicians, his life was upended by World War II, when he and his older brother Michael, were evacuated to a country boarding school for safety. Sacks, a painfully shy child prodigy, had been close to his mother, who brought home dead human fetuses for him to dissect. The prolonged parental separation —plus the headmaster's cruel treatment— led to Michael's psychotic breakdown at 15, later diagnosed as schizophrenia. Sacks created his own scientific universe so as to avoid falling into his brother's madness. The empathy and sorrow he felt for Michael was later transferred to his patients.

Before attending Oxford, Sacks told his parents he was gay, with his mother responding, "You are an abomination. I wish you had never been born." This reaction wounded Sacks, leading to guilt and shame about his sexuality. Angry with his mother, religion, and England branding homosexuality illegal, he emigrated to San Francisco working as an intern at Mt. Zion Hospital. 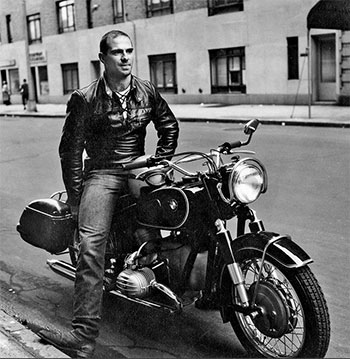 A young Oliver Sacks astride his BMW motorcycle

He started exploring his sexuality, building up his muscles as an accomplished weightlifter. He completed a three-year neurology residency at UCLA. While there he fell in love with a straight guy who rejected him. Sacks turned to amphetamines to deal with his confusion and unhappiness, becoming self-destructive, riding his motorcycle on marathon 36-hour sprees. Viewing his emaciated face in the mirror on New Year's Eve, he recognized he needed help and started therapy.

He arrived in Bronx, NY on an interdisciplinary scholarship in neuropathology at Albert Einstein College of Medicine in 1966. Deemed a failure at research he was told to treat cases at Beth Abraham Hospital, where he remained for his entire career. While there he met catatonic survivors of a 1920s encephalitis epidemic, but sensing some had intact minds and personalities, he started prescribing L Dopa used to combat Parkinson's Disease, resulting in their waking up temporarily, though later regressing due to the drug's debilitating side effects.

This clinical experience became the basis for his book Awakenings, which initially was not a success and dismissed by his fellow neurologists, as was his later writings. He had given up drugs, substituting them for his work. On his fortieth birthday in London, he had sex, but worried about professional ruin if his homosexuality became public, he stayed celibate for the next 35 years. Neurotic, he was considered as strange as his patients. He describes an uproarious sexual incident with orange Jell-o that must be heard to be believed.

Sacks imagined himself into his patient's emotions, galvanized by his tremendous curiosity, wonder about the world, and gusto awareness of life, asking them, "How do you be? What is it like to be you?," treating the person rather than the affliction. 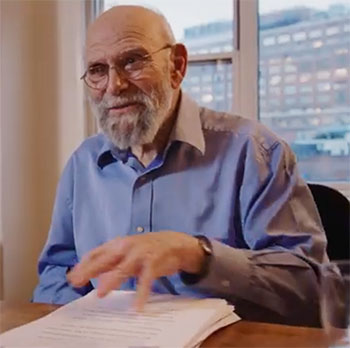 A scene from Oliver Sacks: His Own Life

Although critics accused Sacks of exploiting patients, their stories —an intersection of biology and biography— became the basis of his books, reviving the discarded case history tradition and not the mainstream quantitative analytical approach. Sacks saw himself as a field worker, not a theoretician.

Not until the successful 1990 movie version of Awakenings, starring Robin Williams as Sacks, did his field start embracing him and his revolutionary understanding of brain function/consciousness. The head of Columbia's Neurology Department said that 70 percent of their doctors in training were deeply influenced by Sacks.

In Sack's memoir, he only alludes slightly to his sexuality, but one of the documentary's delights, is his openness and candor, about his 2008 meeting and unexpected ongoing relationship ("a gift") with the much younger writer Bill Hayes, providing him with joy, healing, and a balance to his workaholism. It might have been instructive for the filmmakers to draw parallels between Sack's outsider, unconventional status and his gayness, seeing how they might have intersected and synergistically influenced each other, as he unlocked both his own and his patient's atypical secrets.

As noted by Burns, the film is an unmorbid master class on how to die, with Sacks living his final months to the fullest, writing until ten days before his death at 82 on August 30, 2015.

Ultimately, this film is a tale of redemption, a genius who overcame professional ostracism, drug addiction, psychological traumas, and despair, finding meaning in love, gratitude, and something larger than himself.

This poet laureate of medicine's belief is that we are all alike in our uniqueness which should connect us to each other. His humane message is one all queer people will appreciate and one we need to hear in our bitterly divisive nation, making the film obligatory viewing for just about everyone.

Oliver Sacks: His Own Life is screening virtually at SF's Roxie Theater: www.roxie.com