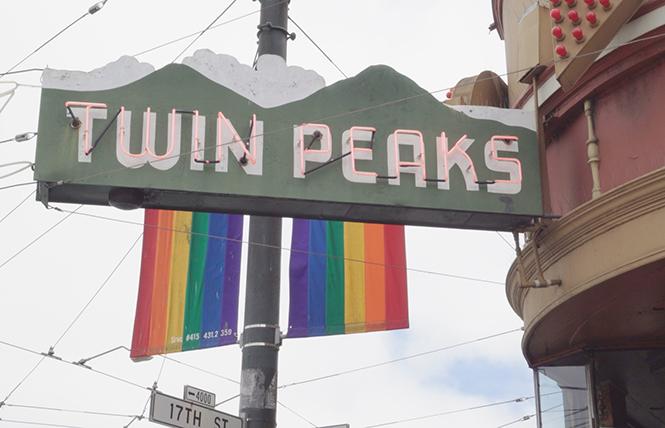 Scene from directors Bret Parker and Petey Barma's "Through the Windows." Photo: Courtesy the filmmakers

"Through the Windows," a new documentary about the historic Twin Peaks Tavern at the corner of Castro and 17th Sts., will premiere at this year's Frameline LGBTQ Film Festival (Castro Theatre, June 24, 1:30 p.m.). It was co-directed by Bret Parker and Petey Barma, a married lesbian couple who call the Castro home. Parker is no stranger to filmmaking, as she has worked at Pixar Animation Studios for 23 years.

When it first opened as a gay bar in 1972, Twin Peaks Tavern made history by being the first gay bar in the U.S. to open its windows to the outside. For the first time, pedestrians on the street could look inside the bar's windows and see the gay people inside. In 1972 this idea was revolutionary. People could still be fired from their jobs for being gay at that time, and police harassment was common. According to two former Twin Peaks employees interviewed in the film, some people felt no one would patronize the bar. They were wrong. Soon Twin Peaks Tavern was jammed.

At 54 minutes, "Through the Windows" is short and sweet, and would fit perfectly into a one-hour timeslot on PBS. No PBS airings are planned, but Parker and Barma are crowdfunding so they can continue distributing the film beyond Frameline. They have already been in contact with the GLBT Historical Society and are planning a screening of the film at the GLBT History Museum in the fall. Parker is reaching out to Castro businesses to raise funds for distribution, which she hopes will include online streaming and touring to film fests.

"At a time when the basic civil rights of all LGBTQ people are being threatened, it's more important than ever to remind people not only of our history, but of our presence, and our film does just that," Parker says in a letter to donors. "These were all people that during the 70s dared to be seen. It's our responsibility as queer filmmakers to continue that dare by bringing our own voices out into the open."

The film features interviews with longtime bar patrons, current and former employees, who share their coming out stories and speak of the camaraderie they found at Twin Peaks. Patrons recall people who had their favorite seats in the bar, and engaging in "staring contests" if they came in and found their favorite seat taken.

The AIDS crisis is cited during a moving portion of the film in which patrons and former employees speak of those who've passed on. The Twin Peaks was the site of many "Celebration of Life" ceremonies. Some employees pay tribute to the bar's former owners, who made sure their employees had health insurance. The film reminds us that the gay community took care of each other during the AIDS crisis.

To donate to the distribution campaign, go to: www.throughthewindows.com