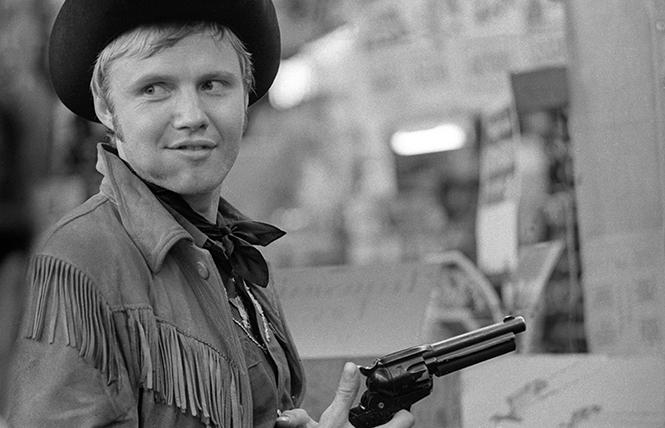 The Oscar-winning film "Midnight Cowboy" will screen at SFMOMA on April 19, in conjunction with the film's 50th anniversary. Michael Childers, who for more than three decades was the life partner of the film's director John Schlesinger (1926-2003), will attend the screening and participate in a Q&A.

"Midnight Cowboy" attracted a great deal of attention when it was first released. It told the story of two down-on-their-luck homeless guys in New York City who become family to each other. The film shocked audiences with its realistic portrait of a city that was then in steep decline. Jon Voight and Dustin Hoffman won acclaim for their performances as Joe Buck and Ratso, a hustler and a con artist living together in an abandoned building, trying to get by as Joe attempts to succeed as a prostitute. The film includes a then-shocking scene in which Joe allows a young man to perform oral sex on him in a seedy Times Square movie theater.

It was a brave and daring film to make in 1969, and it became the first and only X-rated film to win the Oscar for Best Picture. Schlesinger also took home the Oscar as Best Director, and the film has since been deemed "culturally, historically or aesthetically significant," selected for permanent preservation by the National Film Registry at the Library of Congress. It was ranked #36 of the 100 Greatest Films ever made by the American Film Institute.

"It's thrilling that San Francisco is honoring 'Midnight Cowboy,'" Childers said in an interview with the B.A.R. "We've had screenings in other cities. 75% of the audience had never seen it on a big screen, and the reaction is extraordinary. It really holds up, which is the true test of a classic movie."

The SF screening is a kind of a homecoming for Schlesinger. In 1967 the auteur was honored at San Francisco International Film Festival with screenings of his earlier works "Billy Liar" (1963) and "Darling" (1965). Julie Christie, the latter's star, attended the event. 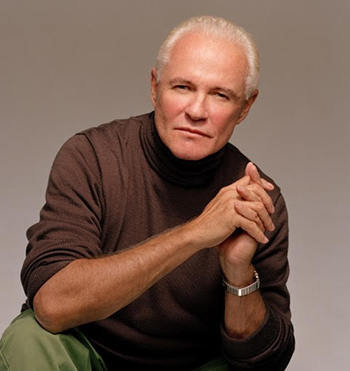 Michael Childers will participate in a Q&A at the Midnight Cowboy screening. Photo: Jay Jorgensen

Childers recalled how shocking "Midnight Cowboy" was upon its initial release. "At the time it was considered to be outlandish, and people were outraged," he said. "By today's standards, it's practically PG-13. They took an X rating to quiet the turbulence of the reaction, but after it was nominated for all those Oscars, they re-rated it to be restricted. The acting is so good. Just seeing the brilliance of Voight, his pent-up anger, and Hoffman is so good. It is a love story, but it's not a homoerotic love story. It predates Stonewall by a year. It was of its time."

According to Childers, the film is about two people who came to care deeply for each other, and about survival.

"New York was in pretty bad shape at the end of the 1960s and early 70s," he said. "It was falling apart, and crime was through the roof. At the same time it was the most exciting city in the world. There was Andy Warhol and his Factory, there was Studio 54. New York was filled with theater and ideas, and there was a lot happening then. There were two sides to the coin. It was great for me to be there in the 60s."

According to Childers, Schlesinger was a courageous filmmaker who was always willing to take chances. He followed "Cowboy" with the ahead-of-its-time "Sunday Bloody Sunday" (1971), a character-driven study of a young bisexual artist (Murray Head) in simultaneous relationships with a man (Peter Finch) and a woman (Glenda Jackson).

"'Sunday Bloody Sunday' is a brilliant, classic movie," Childers said. "It's very underrated, and sadly the younger gay generation doesn't even know about it. It was the first movie that depicted gays as normal human beings with love, courage, and partnerships. It was groundbreaking at the time. It was John's passion to make 'Sunday' because in the 60s all the gay films had the gay characters commit suicide in the third act."

Childers remembers Schlesinger as "a warm, fuzzy, wonderful, brilliant man. A great wit." The two were set up on a blind date, which led to a relationship of more than 30 years. They also worked together. Childers served as Schlesinger's personal assistant on "Midnight Cowboy." Though he wasn't the official photographer on the film's set, he did take many photos during filming, and will be having an exhibition of these photos in Palm Springs. He remembers the shoot as a wonderful experience. Childers cast the film's party sequence, made the underground movie seen during the party sequence, and drove Voight around Texas for 10 days as the actor worked on getting the Texan accent his character required. He also found the small Texas town that stood in for Joe Buck's hometown. "I was allowed to contribute a lot," he said. "It was a great learning experience."

When he appears at SFMOMA, Childers will be sharing his memories of working on the film, and his memories of Schlesinger. The evening will include a showing of Voight's screen test for the film.