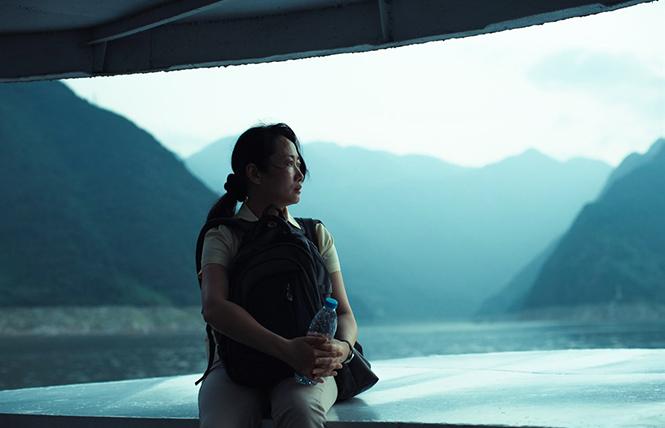 In "Ash is Purest White," his 13th and perhaps most challenging film, Chinese writer-director Jia Zhang-Ke offers a tortured travelogue disguised as a love story. It's further disguised as a gangster tale that could only unfold in a developing nation being erected painfully and often violently over a proud and ancient culture.

"Ash," a Chinese-French coproduction (in Mandarin with English subtitles), opening Friday, continues the director's penchant for spicing up a homebrewed Chinese soundtrack with splashes of Western pop. In "Mountains May Depart" (2016), the Pet Shop Boys provided a cheeky accent. In "Ash" that role is filled by the Village People's "YMCA," two choruses no less. Jia Zhang-Ke is fond of the pop-music bumps in part because they reflect the emotional upheaval of a society where everything seems up for grabs. "Ash" includes the depiction of how large chunks of China's Northwest region are scheduled to be flooded by a huge dam/hydroelectric project.

The love story has a young woman (Qiao, played by veteran actress Zhao Tao, her ninth appearance for the director) falling for Bin, a local gangster. Bin is finding it increasingly tough to defend his turf against younger wannabe hoods.

Qiao stands by her man, flashing an illegal pistol when he's getting his ass kicked by a gaggle of 20-something thuglettes. No good deed going unpunished, Qiao feels the wrath of the law, getting five years in prison, while Bin gets off with a year. The bum isn't waiting for her when she finally leaves women's prison. Qiao toughens up a bit, getting the better of several dumb guys, including a brutish moped-taxi driver whose bike she appropriates while also accusing him of rape.

The film is methodically paced, eruptions of brutal violence dispelling any possibility of tedium. It's sublimely filmed by noted French cinematographer Eric Gautier, whose lighting design has graced the work of world-class directors. Gautier's scheme incorporates five different types of camera footage, including home video material from his director. The result is a film that feels vividly alive all the way through its 136-minute running time. The French cameraman also uses different focal lengths that add to the film's journey, especially in train sequences, from the slow local to the high speed express. Warning for persuasive smoking in virtually every scene by virtually every cast member.

"Sorry Angel" This gay-boy younger hustler/older writer romance kicks off in a Paris cafe, circa 1993, where a quasi-known writer/single parent, Jacques (Pierre Deladonchamps), meets Arthur (Vincent Lacoste), a 20-something wannabe filmmaker. The "Kid" apologizes to his 30-something "date." "Believe me, I was pretty in high school."

This is the latest work from French writer-director Christophe Honore, whose previous films ("Love Songs," "Dans Paris") have added a deft romantic accent to gay-boy dating tales. Honore once again shows a nice approach to the themes of loss, youthful flings and aging. Fans of "The Shadow of Your Smile" will love "Sorry Angel." In French with English subtitles. Opens Friday.