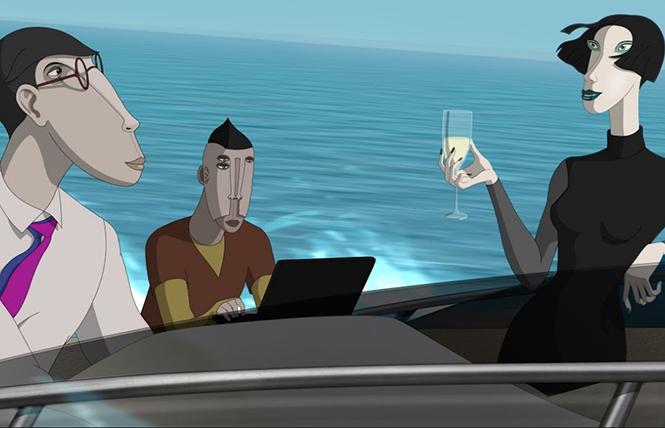 "I wanted to make something that wouldn't be boring," states Slovenian-born filmmaker Milorad Krstic, and he has succeeded beyond measure in his wildly original debut feature "Ruben Brandt, Collector." Krstic, a recovering lawyer who's now a practicing painter and multimedia artist based in Hungary, has created an animated film that is truly unique and nearly impossible to describe. A shadowy twisted noir, a psychological horror thriller, and an encyclopedic art-history adventure film with action sequences rivaling the complexity of "Mission: Impossible," it roars to life after a heist from a Cleopatra exhibition with an almost 10-minute, elaborately choreographed car chase through the streets of nighttime Paris, with scenic views of the Seine and souped-up vintage automobiles — and that's just for starters. It's also a feast for fine art aficionados and movie buffs, with more than 100 cinematic and art historical references, from Caravaggio, Gauguin and Picasso to Dali, Hopper and Magritte. Half the fun is spotting them along with way; note the ice cubes shaped like Alfred Hitchcock bobbing in a cocktail tumbler.

"The whole film is an homage to Hitchcock," says Krstic, and the irresistible hook and fiendishly devilish plot would certainly suggest a debt to the perversity of the master of suspense. The protagonist Ruben Brandt, a famous psychotherapist scarred by childhood trauma, enlists a willing quartet of his criminally inclined patients to steal 13 masterpieces that have haunted the terrifying nightmares he's suffered since he was young. The unwitting subject of subliminal mind experiments at the hands of his East German scientist father, who tried and failed to transform his son into a great artist, Brandt is spooked by Warhol's multiple Elvis Presleys, who, at one point, challenge him to a "High Noon"-style duel.

In another scene the enraged character from Diego Velazquez's "The Infanta Margarita Teresa of Spain" assaults Brandt in a compartment on a moving train; later, the long tresses of Sandro Botticelli's Venus reach out from the canvas to caress him before strangling and pulling him into her underwater lair. Even Van Gogh's Postman Joseph Roulin stops by. What's a doctor to do? Brandt, whose name is a play on Rubens and Rembrandt, is a poster boy for the adage "Physician, heal thyself" — but maybe not by means of a crime spree that sees the gang of globetrotting thieves hitting esteemed museums from the Hermitage, the Uffizi and the Louvre to the Musee d'Orsay and New York's MoMA. In no time, our man on the lam becomes the most wanted criminal mastermind in the world. There's a $100 million reward for his capture, and a cool, tough-talking detective named Mike Kowalski hot on his tail; a cigar-chomping Mafioso and his goons aren't far behind.

As madcap as the opening car chase may be, it delays Krstic's plunge into his arresting premise. Once in gear, however, the story barrels ahead at a breathless, breakneck pace egged on by Tibor Cari's rollicking orchestral score infused with jazz, pop and the occasional alarming dash of Stravinsky. Through surrealist artworks and Picasso's cubism — many of the peculiar characters and paintings have three or more eyes, multiple heads and off-kilter faces — and a collision of stylized, hand-drawn, CGI and other animation techniques, Krstic endows the picture with atmosphere and delicious characters like the ruby-lipped, acrobatic Mimi, Ruben's Garboesque accomplice. Krstic's most vivid creation — he spent seven years perfecting her — the leggy, swan-necked, femme fatale kleptomaniac could get a job with Cirque de Soleil if she ever decides to go straight. We first meet her speeding away in a Mercedes convertible in the aforementioned car chase (shades of "Bullitt" and "The French Connection") and next encounter her poised on the edge of a hot-air balloon soaring above the countryside. A woman of special talents, especially when she removes her astronomically high heels, she can shoot a bow and arrow with her toes while upside-down. The rest of Brandt's crew, rounded out by a plump bank robber and a beefy former bodyguard, remain, well, two-dimensional. One can flatten himself and slip under a doorway, a neat trick that comes in handy when making a narrow escape. Meanwhile, Mike's gal Friday is an alabaster beauty most comfortable working in the nude from a swimming pool surrounded by classical statuary, one of the film's many ridiculous, deliriously inspired touches. Krstic also gets in a couple of amusing digs at performance and Pop art (obviously not his jam) when the team starts a rumpus at a Tokyo exhibition.

The improbable tale is capped off by an existential final sequence in which Ruben is the lone passenger on a train traveling across a bridge and into the sunset. The painterly imagery takes the story full circle, back to where it began, causing one to wonder if the whole raucous ride was only a dream.