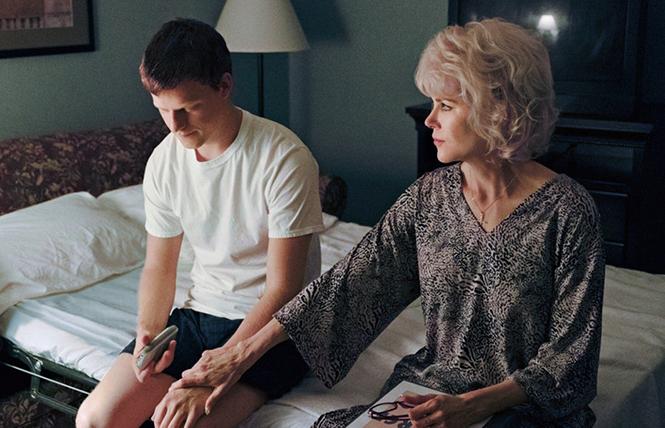 The best 2018 films reflect a striking LGBTQ visibility from singular talents such as rising star Lucas Hedges, who offers dynamic performances in both the queer-themed "Boy Erased" and the addiction drama "Ben is Back." Last year's honorary gay boy Timothee Chalamet ("Call Me by Your Name") returns in the taut father-son tug-of-war "Beautiful Boy." Here are my top picks and the logic behind them. Consider the top four tied for Best Film of the Year.

1. "Wildlife" This haunting film, adapted by Paul Dano and Zoe Kazan from a 1990 Richard Ford novel, unfolds over a handful of days as 16-year-old Joe (heartfelt performance from Ed Oxenbould) observes his parents' marriage implode. In his directorial debut, Dano captures the fragile nature of lower-middle-class life that feels cruelly isolated from the postwar American dream machine. Dad (volatile Jake Gyllenhaal) is fired from his job as a country club golf pro. Mom (free-spirited Carey Mulligan) finds meager work as a swimming instructor. Add to this toxic mix mom's affair with an aging tycoon, and you have a nightmare that literally bursts into flames: a savage forest fire that is aspiring photographer Joe's painful baptism into adult life.

2. "Boy Erased" Lucas Hedges appears as a gay youth outed to his family (Nicole Kidman, Russell Crowe) by a malicious fellow student in director Joel Edgerton's gripping drama set among American Baptists. Based on Garrard Conley's 2016 memoir, the film dramatizes the rise of the "ex-gay" backlash.

3. "Ben is Back" 19-year-old Ben Burns (mood-shifting Lucas Hedges) returns to his family's suburban home just in time to put a wrench in their Christmas. Ben's mom Holly (powerful Julia Roberts) is relieved and welcoming but wary of her son staying clean. Over a turbulent 24 hours, new truths are revealed and a mother's love for her son is tested.

5. "Love, Simon" Nick Robinson stars as a young man who has the coming out fantasy we might all have wanted. Adapted from the book "Simon vs. The Homo Sapiens Agenda," the film's hook is Simon trying to uncover the mysterious boy Blue who keeps texting him.

6. "The Happy Prince" The last days in French exile for Oscar Wilde (Rupert Everett) and his two-year imprisonment for "gross indecency." A sublime ensemble includes Colin Firth as Wilde's friend Reggie Turner, and Colin Morgan as his ravishing but betraying lover Alfred "Bosie" Douglas. Director Everett focuses on the rapidity of Wilde's decline once he loses his lawsuit to Bosie's pugnacious dad, the Marquess of Queensberry. With its complicated flashback structure, the film hints at the great storyteller's posthumous victory over his brutish foes.

7. "The Wife" In the new Glenn Close dramedy it's 1993, and Joan Castleman (Close), dutiful wife, is riding through Stockholm with her puffed-up novelist hubby Joe (Jonathan Pryce). Joe is primed for the happiest day of his career as he prepares to receive the Nobel Prize for Literature, but God has other plans. Joe's day will dissolve into humiliations, while his wife will assume her proper role in the family business. Swedish director Bjorn Runce adapts Meg Wolitzer's novel to explore the darker recesses of a 40-year marriage, to question why a talented woman would deny her gifts in favor of a showhorse husband, and to hint at the fraudulence at the heart of award ceremonies.

8. "Roma" Director Alfonso Cuaron's melancholy film memoir concerns a Mexico City clan unsettled by a cheating dad, nurtured by an angelic servant, against the backdrop of a bloody political uprising. 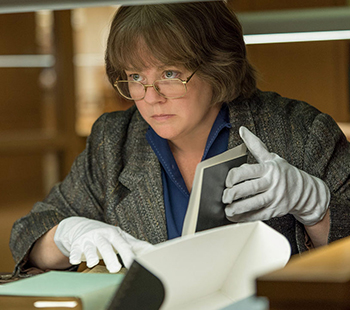 Melissa McCarthy in Can You Ever Forgive Me? Photo: Fox Searchlight

10. "Can You Ever Forgive Me?" This comedy-drama introduces a memorable lesbian: the hard-drinking, anti-social Lee Israel (Melissa McCarthy's slamdunk Oscar bid). Through the 1970s-80s Israel was a successful pop biographer profiling the likes of Katharine Hepburn and Tallulah Bankhead. When her work fell out of fashion, Israel turned to spreading "bad paper," forged letters providing scandalous new details about dead celebrities such as literary wit Dorothy Parker and vaudeville star Fanny Brice. Israel is assisted by her broken-down gay drinking buddy Jack Hock (wonderfully seedy Richard E. Grant). As an extra treat, the film contains a vivid performance by queer singer Justin Vivian Bond. "This next song goes out to all the agoraphobic junkies who couldn't be here tonight."