From festival screens to distribution 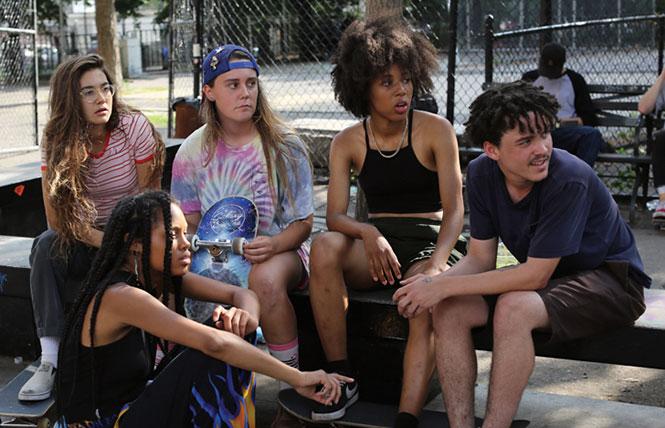 In its early days, the Frameline LGBTQ film festival was often the only place to view cutting-edge queer cinema making its way into the marketplace. Just how far we've come is illustrated by this summary of films from Frameline 42 that have already secured theater distribution or TV deals.

"McQueen" Powerful biopic about queer fashion designer Alexander McQueen, who shocked the world with his designs and a hell of a lot more by the time of his death by suicide at age 40. "I saw myself in the public eye as a gazelle, and the gazelle always gets eaten." (7/27)

"The Miseducation of Cameron Post" On the heels of a Sundance Grand Jury Prize, director Desiree Akhavan ("Appropriate Behavior") tells the tale of a 1990s teenager sent to a Christian-run "gay conversion" camp. Timely hooks include a camper hiding marijuana in her wooden leg. (8/10)

"Skate Kitchen" Crystal Moselle, creator of the Sundance Award-winner "The Wolfpack," sets her new narrative in the world of Long Island's teen girl skateboarding scene. The film documents a special way to waste your summer vacation. (8/17)

"When the Beat Drops" Famed choreographer Jamal Sims directs this bold, energetic nonfiction film about "bucking," a dance subculture that spread from the African American LGBTQ community in the South. This pop craze took off in historically black colleges and universities, went through an evolution at underground clubs, and led to fierce competitions at large venues. (Logo TV, 8/9)

"Quiet Heroes" This quietly powerful doc from Jenny MacKenzie, Jared Ruga and Amanda Stoddard traces the early days of the AIDS epidemic and the work of a pair of Utah women doctors who became a romantic couple. (Logo TV, 8/23)

"Studio 54" Draws on previously hidden sources to show what went on behind the velvet rope at the former CBS-TV studio turned Manhattan disco. Today it's hard to believe that Studio 54 lasted a mere 33 months, from 1977-80. Director Matt Tyrnauer zooms in on its celebrity owners Steve Rubell (dead from AIDS by 1989) and Ian Schrager, who met at college and lived to showcase the exhilarating highs and deadly lows of the club scene. The disco was in many ways an apt metaphor for the political and financial shenanigans illustrated by the infamous tabloid headline, "[Pres.] Ford to NYC: Drop Dead!"

While disco remains a touchy subject for those of us loyal to radio formats killed off by the late-70s dance-club craze, the disco era was a moment when early post-Stonewall kids got down with their oppressors, a once-cool society crowd used to deciding who was and was not fit to be seen. So strap on your dancing shoes, feather your hair, and prepare to get down with this documentary about the dance parlor where Elton John, Cher, Grace Jones and other celebs bumped up against common guys and gals lucky enough to get past the velvet rope. (10/12)