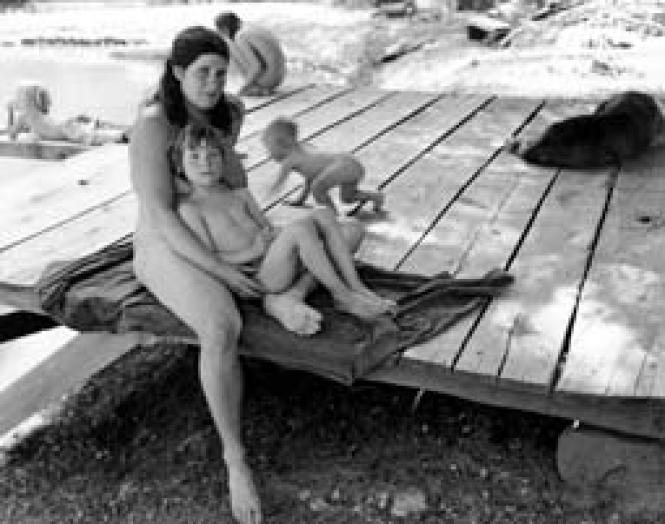 Mother and child in Commune.

As we wait for the California Supreme Court, our legislature and the "Governator" to sign off on our fundamental right to marry, it's instructive to recall a time, 40 years ago, when some Californians were running away from the marriage bed as fast they could. Watching the new documentary Commune (playing this week at the Red Vic), an intimate and instructive look at that fleeting moment in time, roughly 1968-78, when the idea of group living, if not group marriage, looked mighty tempting to a lot of social and political rebels, is like entering an interactive time capsule where you not only watch some pretty attractive people of both sexes cavorting through protracted adolescence, living their most cherished fantasies, but also get them to tell you what it felt like to create a kind of utopia, then slowly return back to earth, settling for the comparatively blander joys of a hippie version of the nuclear family.

Director Jonathan Berman makes clear that young men were often drawn to the 80 acres of rural Oregon forest land that made up the Black Bear communal ranch for very different reasons from their female counterparts. In the film, an aging male alumnus recalls a night that rocked his world.

"In the middle of the night, a young woman climbed into bed with me and fucked me upside and down. I woke up in the morning, and my bed was empty. I went downstairs for breakfast, and all the girls were sitting there, eating their eggs, and I figured, 'As soon as I see the women, I'll be able to tell which one it was.' Well, I couldn't. I'll never forget that night: not the sex so much, but — just thinking about it makes me want to cry — the openheartedness of it."

A female resident says living on a property accessible only by a nine-mile dirt road appealed to politically active members, especially those with the FBI breathing down their necks.

Director Berman depicts the history of the Black Bear community with a deftly edited mix of primitive black-and-white video and present-day interviews with aging survivors. One elderly woman recalls a harsh first winter when a lack of basic provisions and survival skills made her feel their fate would be that of the Donner Party. A male resident remembers a ludicrous group meeting in which the survival of the commune's sole cow was put to vote because some members felt that cow milk was unhealthy.

A fascinating subplot involves the slow but steady evolution of the female members' sense of their power. A crisis that threatened the ranch's existence arose when Black Bear was infiltrated by members of a "child-worshiping" cult. A countermovement led by the strongest women of the ranch resulted in the expulsion of the cult, but not before a few of the ranch's children were whisked off to spend a perilous time in a forlorn trek across South Asia.

A painfully funny moment has the film turn into a kind of hippie reality show, as an older man has his memories of another man edited by his wife's refusal to allow anything but a positive spin on their shared history.

For the kids of Black Bear, growing up in this Paradise Lost could be emotionally harrowing. One blonde boy defied his hippie parents by getting a crew-cut and deciding to live a more conventional life with a neighboring logging family. Now a middle-aged biochemist raising his own brood in a San Francisco suburb, the man recalls with some sadness how long it took him to trust his biological father again. Many members of the commune were often so preoccupied with building an ideal world that they had scant time for raising their actual kids.

A young woman admits that the "stupid thing" her parents saddled her with — an extended non-biological family — actually allowed her to grow up "extremely open-minded, in terms of what relationships looked like, down to the point of should relationships be with a man or with a woman. And it's been a pretty permeable boundary for me. I think I really fall in love with people."