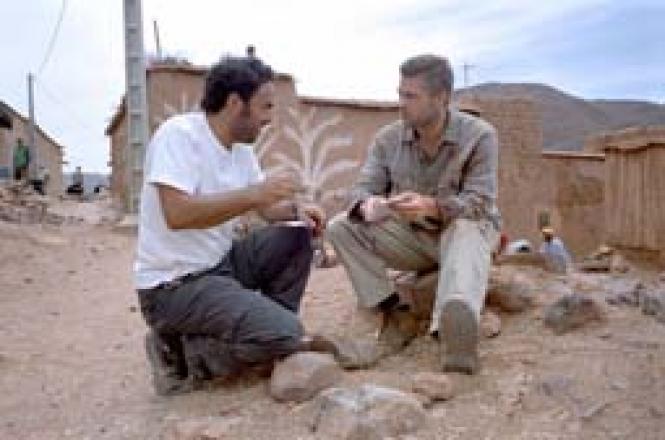 In Babel, the exhilarating conclusion to a trilogy of films from director Alejandro Gonzalez Inarritu and screenwriter Guillermo Arriaga (Amores Perros, 21 Grams ), a small, nervous white boy is riding along with his little blonde sister in the backseat of a car driven at high speed through a Mexican desert by Santiago (Gael Garcia Bernal), a jolly but not terribly reassuring young man, a distant relative of their Mexican nanny. The car is headed for the wedding of the nanny's son.

"My mom told me Mexico is really dangerous."

Meanwhile, the little boy's parents Richard (Brad Pitt) and Susan (Cate Blanchett) are quarreling at a small roadside restaurant tucked away in a Moroccan desert.

"Richard, why did we come here?"

"But you don't know what kind of water is in there."

Halfway around the world, a deaf, rebellious Japanese teenage girl removes her panties and flashes a startled boy in a packed Tokyo club. Meanwhile, a pair of detectives is trying to find the girl's father, wanting to question the man about a Winchester rifle that Moroccan authorities are seeking in the shooting of an American woman on a tourist bus in the middle of the desert.

The rifle becomes like the car accidents in the first two films: the central moment whose shock waves connect once-unrelated lives, this time across distant continents and barriers of language and custom.

The little boy attends his first wedding, watches Santiago decapitate a chicken, then discovers that the trip from rural Mexico back to his San Diego home will be the longest and most perilous of his young life. His parents simultaneously learn just how hard it is to summon an ambulance in the Moroccan desert. We see how quickly a misguided prank can be labeled an act of terrorism, and how the police in this part of the world are still searching, like Claude Rains, for "the usual suspects," and none-too-gently. In Tokyo, the young, deaf girl's sexual frustrations and sorrows over the recent death of her mother are felt, in turn, by the startled boy, a very perplexed dentist and an equally perturbed young cop.

Casting their third fable across a global stage, the filmmakers ground every moment and fleeting detail. A Moroccan doctor treats a gunshot victim; the suspicions of an American border-patrol agent (Clifton Collins, Jr.)  incite a perilous dash across a deadly landscape; and authorities trace the movement of a single firearm without a clue as to the true motives of its various owners.

Babel is a thoroughly engrossing journey with a diverse international cast. Brad Pitt, in a role that seems an ironic extension of his recent real-life adventures, for the first time in his career looks like he's actually aging along with the rest of us. Pitt seamlessly goes from possessor of the celebrity youth fountain to a graying, agitated and, at times, ugly American. Cate Blanchett is sublimely vulnerable as an American woman who's been conscripted against her will to live in a Paul Bowles story. And Gael Garcia Bernal, playing a much smaller role than his brash young dog-fighter in the first film, in a relatively small amount of screen time leaves a strong impression as a witty, impetuous and always dangerous young man. He turns a unique character into the beginnings of a new national archetypal figure, a young man whose personal philosophy and style are as distinctive as Belmondo, Brando and Bogart.

Fans of the Inarritu/Arriaga trilogy will watch all three endlessly on DVD to trace interlocking themes. See Babel while it still illuminates a big screen, for all the clues it contains about our times, as we babble more and more about less and less.