Heading for the finish line 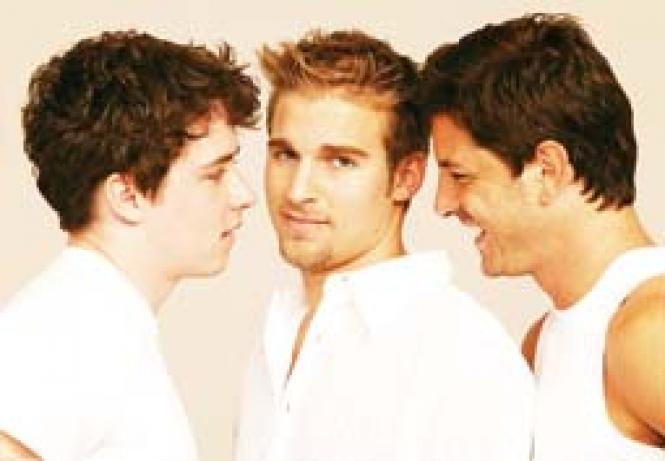 The final lap in the Frameline film festival features derby is studded with entertaining movie-going options (through June 25). A number of this year's 52 fiction films are eligible for cash prizes. Here are five highlights.

The Mostly Unfabulous Social Life of Ethan Green Based on Eric Orner's popular gay comic strip. Ethan (Daniel Letterle, who played the dazzling, guitar-playing straight boy Vlad in Todd Graff's summer-theatre spoof Camp) embodies every bad trait an urban gay guy could ever wish for: he's insensitive, vain, superficial, fickle, self-absorbed, and has an uncanny ability to break up with every man he takes up with, usually for all the wrong reasons. "I just want someone butcher than me and less masculine than Chastity Bono."

Writer David Vernon and director George Bamber have adroitly mined the best gags and one-liners from the strip, surrounded Ethan with a Dawson's Creek-quality supporting ensemble (David Monahan, as Ethan's "boring ex" Leo, was actually Kerr Smith's best boyfriend on the Creek) and constructed a dizzy Boystown fable that blends screwball and farce.

In Camp, Letterle played to perfection the impossibly perfect hetero boy that all the faggy campers swooned over. Why do we put up with, and in fact worship, such creatures? As Ethan, Letterle raises his voice an octave and plays his blandly unassuming entitlement genes for all they're worth. But all poker hands must finally be played, and Ethan, at 26, feels his clock is ticking and that he should finally settle down with someone: Leo, ex-ball-player Kyle, or the insufferably perky teenage realtor Punch Ã¢â‚¬â€ or, as his too-knowing mom warns, "You may end up some troll, living in the basement apartment and paying for rough trade." (Victoria, 6/23)

The Line of Beauty Absorbing, erotically provocative and terrifyingly chilly account of a young man's rise and fall from grace during the reign of Britain's "Iron Lady," Prime Minister Margaret Thatcher. Nick Guest (Dan Stevens channels the guile-free charm of the young Timothy Bottoms in The Last Picture Show) develops a crush on Toby Fedden (Oliver Coleman) at Oxford and, like a big, overgrown puppy, follows Toby home, where he becomes a pet in the Feddens' Notting Hill mansion.

Toby's dad Gerald (Tim McInnerny) is a Tory MP and future Cabinet star whose townhouse is a magnet for the socially ambitious and financially unscrupulous. Nick's clandestine affairs Ã¢â‚¬â€ with a black council worker, Leo (Don Gilet), and the gorgeous scion of a Lebanese supermarket mogul, Wani (Alex Wyndham) Ã¢â‚¬â€ teach him to lie with a straight face and protect the Fadden family secrets, among which is the fragile emotional health of Toby's bi-polar sister, Catherine (Hayley Atwell).

Based on Alan Hollinghurst's Booker Prize-winning novel (adapted by Andrew Davies), The Line of Beauty recalls a time when young men swam to please each other and tease an older generation, fucked passionately, snorted prodigious amounts of coke, and then died in great numbers while old men toasted "the Lady." (Castro, 6/23; Victoria, 6/24)

Fat Girls A seductive deadpan comedy in the style of the uber-nerdy Napoleon Dynamite, by Paris, Texas wunderkind Ash Christian, still in his teens, Fat Girls will leave you smiling. Rodney Miller (Christian), a self-described "fat girl," is actually a plumpish gay boy with dreams of Broadway. Rodney, who's giving hand-jobs to the school's top jock, decides to ask another rebel, a British visitor, the very humpy Joey (Joe Flaten), to his small-town Texas prom. The film company got flack from the city fathers of Canton, Texas, when they learned of the subject matter, so the production switched to the Dallas suburb of Waxahachie.

There are no big jokes, just a series of the risibly shameful moments that, when viewed from the right angle, are delightfully preposterous: that Rodney's fundamentalist mom cooks foods in religious themes, that his dad died after sex with a pushy midget woman, that Rodney is pining for a glimpse at prom date Joey's wiener, or that his teacher Mr. Cox (Tarnation 's Jonathan Caouette) does a mean drag act at the local queer pub. (Castro, 6/24)

Criminal Lovers In the opening act of Francois Ozon's twisted fairy tale, a high school girl lures her very nervous boyfriend up to her room for a sexy striptease. Alice whispers to Luc that she has been abused by another boy Ã¢â‚¬â€ a muscular Algerian, a boxer, the boy she really lusts after. "We shall kill Said. I seduce him. You kill him. We take off for the forest. We bury his body."

Our teenage killers buy a shovel at the mall. Alice teases Luc at the checkout counter, "You must be happy. You said nothing ever happens to us. For once, something has happened!"

Having seduced us to expect Oliver Stone, Ozon switches gears and gives us the Brothers Grimm: our not-so-sweet children are lost in the woods. Finding a rowboat, they drift down a river. A cabin appears, only it's actually a trap. Luc and Alice have become prey for a woodsman who likes his girls skinny and his boys plump.

Criminal Lovers splices the American gangster movie with that most pessimistic of all art forms, the European fairy tale. Ozon gets to turn the tables on his young outlaws and allows the audience to empathize with their plight, employing voyeurism and S/M fetishes to shed light on the shifting power relationships between Alice, Luc and the Woodsman. (Roxie, 6/22)

Water Drops on Burning Rocks Ozon discovered a dark little play by the master of domestic Sturm und Drang, Rainer Werner Fassbinder. Written by a then-19-year-old Fassbinder, the play is an amazingly prophetic look at the Svengali-like lover the adult Fassbinder would become.

Fiftyish Leopold, an insurance salesman whose clients have conveniently suicidal tendencies, a kind of gone-to-seed Dirk Bogarde, brings 20-year-old Franz home to his tastefully sterile apartment. Franz is a high-strung redhead who chain smokes and bites his nails. Leopold is good at playing games, and Franz hates to lose. This couple will be locked together, cobra and mongoose, til death do them part. For Leopold and Franz, sex is a fantastic game, and everything else is merde! Five months pass, and the shy boy is now wearing an apron, playing the happy hausfrau, preening and primping for hubby.

But pleasing Leopold is a losing game Ã¢â‚¬â€ he always wants the last cigarette, the last word. Leopold starts to whisper to the boy about making a little money on the side Ã¢â‚¬â€ boyfriend becomes wife, wife becomes whore, boy becomes girl, man becomes bored and looks for new plaything Ã¢â‚¬â€ and on and on down the sexual food chain.

This is the easiest to admire and the hardest to like of Ozon's films released in America. As Leopold turns the screws on the once-sweet Franz, you want to holler at the screen, "Kick the old bugger out!" But of course, Franz is already becoming Leopold, who, in turn, is only a prettier version of that great Shavian bully, Henry Higgins. As the song goes, "You'll be sorry, but your tears will be too late." (Roxie, 6/23)