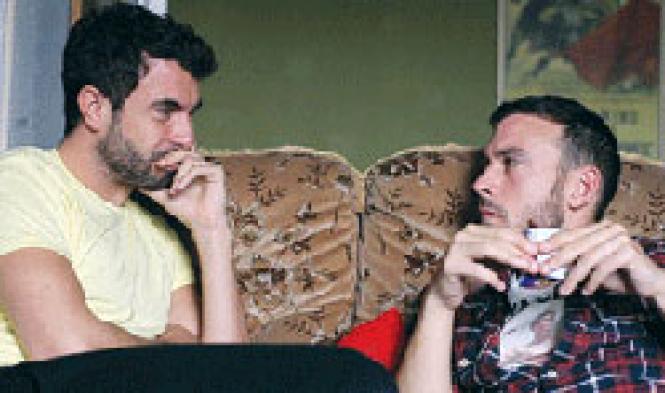 The awards season kicks into high gear this fall with a strong slate of queer work in upcoming films. Here are some three-month highlights, in addition to work that will debut at three film festivals: Mill Valley (Oct. 6-16), the San Francisco Doc Fest (Nov. 3-17) and the 8th San Francisco South Asian Film Festival (Nov. 3 at the Viz, the Brava and the Castro Theatre).

WeekendBritish writer/director Andrew Haigh (Greek Pete) reinvents the romantic chamber piece with this off-beat pairing of a semi-closeted lifeguard with an abrasive college student who lowers his guard and plunges into a relationship right before leaving the country. This gay "lad" whirlwind courtship ignites on all burners, especially in its brazenly intimate, opposites-attract bedroom chatter. (Oct. 7, Landmark Theatres)

The Skin I Live In Antonio Banderas returns to Spain and mentor Pedro Almodovar in this outlandish melodrama dripping with science-fiction tropes. Banderas' Dr. Ledgard drowns his grief over the fiery car-crash death of his wife by creating a new, burn-resistant type of human skin. Needless to say, the good doctor has gone over to the dark side. (Oct. 21, Embarcadero)

We Were Here The epidemic that claimed and ruined a huge number of lives has found its cinematic poet. David Weissman (with Bill Weber) discovers an evocative way to frame a community's heroic fight against a disease, and the parallel calamity of religiously fueled bigotry, in the stories of a footloose community organizer, an outdoor florist, a wildly creative visual artist, a heroic nurse and an emotionally bereft volunteer. The best film effort to date that can unite the generations until there's a cure. (Sept. 30, Castro)

TomboyIn the opening of French director Celine Sciamma's lovely fable on how gender trumps everything, we enter the potentially magical garden of adolescence. A 10-year-old child is sitting in daddy's lap getting a playful first driving lesson. It's one of those rare moments where we are not immediately clued into our hero/heroine's gender. Observing Laure (the impeccably androgynous Zoe Heran) interact with her loving parents and sassy but thoroughly feminine kid sister is getting a privileged, all-access pass to a childhood paradise immediately before the loss of innocence, sans that phrase's religious baggage. (Nov. 25, Landmark)

Higher Ground The emotional dynamics of two Midwest families with a fundamentalist religious persuasion get an unusually empathetic examination in Vera Farmiga's directorial debut. This Sundance-crafted drama is fueled by an emotive ensemble, featuring Farmiga as a devout woman who resists the patriarchal constraints of her faith. It's an offbeat peek into how a rock n roll generation copes with Jesus, based on Carolyn S. Brigg's memoir This Dark World. (Sept. 2, Embarcadero)

RestlessGus Van Sant is back with one of his moral fables, this time exploring the coming together of Annabel (The Kids Are All Right's Mia Waskikowska) and Enoch (Henry Hopper), two young people doing a dance with death. Annabel's a terminal cancer patient, and Enoch's lost his parents in an accident. Combining magical elements - Enoch is assisted by the ghost of a Japanese kamikaze pilot - this one projects an irreverent spirit and may appeal to fans of Anthony Minghella's Truly, Madly, Deeply. (Sept. 23, Embarcadero)

MoneyballI remember the night I hoisted a glass celebrating the crushing defeat of the Oakland A's in the 1990 World Series. Drinking in a dive across from the SF Hall of Justice, I rejoiced in the sweet revenge of seeing a team that had humiliated my Giants in the 1989 Earthquake Series go down in flames.

This promising comedy/drama examines how the A's got their mojo back following the loss of the Haas family's fortune and the destruction wrought to their stadium by the Darth Vader of Bay Area sports, Al Davis. Championed by and starring Brad Pitt as the boyish A's GM Billy Bean, the Oakland-shot baseball saga explores whether a wacky new way to parse the economic value of pricey young players might bring glory days back to the Oakland Coliseum.

"There's a championship team we could afford because everybody else undervalues them, like an island of misfit toys."

"You don't put a team together with a computer."

"Billy Bean is trying to reinvent a system that's been working for years."

"What is happening in Oakland, it defies everything we know about baseball." (Sept. 23, wide release)

The Black Power Mix Tape 1967-1975 One's impression of the movers and shakers of the black power movement - Stokely Carmichael, Bobby Seale, Huey P. Newton, Eldridge Cleaver and Angela Davis - gets a major makeover in these remarkable Swedish TV tapes, left to molder for years in a Stockholm basement. Trust Swedish journalists to capture the human, thoughtful side of a collection of American rebels consistently demonized on the American boob tube. My souvenir "FBI Wanted" poster of a giant Afro-sporting Davis has never seemed so precious. With music by the Roots and Michael Jackson, this mind-expanding doc is an appropriate companion piece to Harvard Law School Professor Randall Kennedy's penetrating new volume, Racial Politics and the Obama Presidency. (Sept. 23, Landmark)

Take Shelter Fans of Jeff Nichols' harrowing breakthrough feature Shotgun Stories will be happy to hear that Sony Classics has picked up his latest project that reunites him with his actor/muse Michael Shannon. Shannon is a family man who's digging a backyard shelter, fearing either an apocalyptic event or his own mental breakdown. (Oct. 7, Embarcadero)