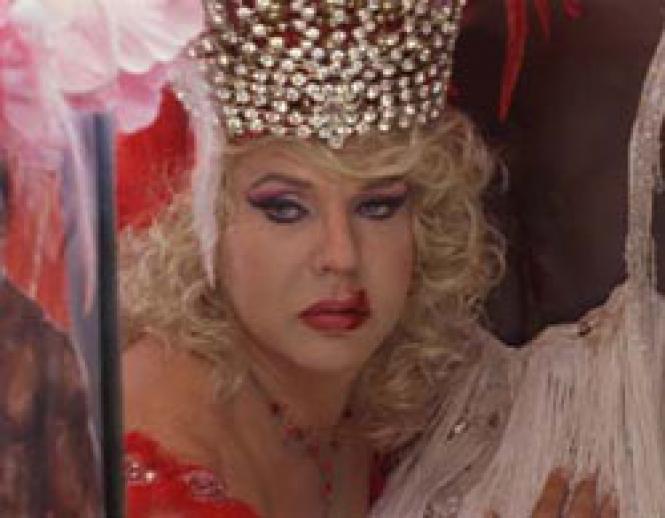 To Die Like a Man - The director of O Fantasma, Joao Pedro Rodrigues achieves his masterwork in this sublimely surreal, tragic yet transcendent melodrama celebrating the final choices of a Lisbon female impersonator.

For decades, Tonia (a nuanced turn from Fernando Santos) has dominated a small drag club. She makes it clear to a "Nubian" queen that she's the only blonde act in the joint. She's been a skilful gardener, a devoted poodle owner, a lousy parent to a bitter soldier son (a relationship with a body count), and finally a distracted "girlfriend" to heroin junkie Rosario. As Rosario, the lanky Alexander David brilliantly mimes the junkie's mercurial mood swings and destructive behavior before a neat third-act transformation that includes a lovely nude stroll on a deserted beach.

Subliminally influenced by a gaggle of film styles - studio-period Bette Davis, angry Bergman, hallucinatory, elliptical Thai with trace elements of Bunuel, Pasolini and Ozon - Rodrigues conducts a moviehouse meditation on the slippery line between male and female in this world and beyond. The sad refrain of the Portuguese fado replaces lip-synced disco as a dying queen gathers forget-me-nots and wails at a red lunar eclipse. (Clay, 5/1; Kabuki, 5/3, 4)

Joan Rivers: A Piece of Work - Ricki Stern and Annie Sundberg provide a hilarious and harrowing look at female comedy's original comeback kid. Joan Rivers was banished from late night when Johnny Carson got pissed at her for accepting a competing Fox show. "Johnny slammed down the phone, never spoke to me again and had me blacklisted. To this day, I've never been on NBC Late Night."

Why does she go after hefty fees and upgrades? A female assistant quips, "No upgrade? Well then, they'll get $125,000 worth of attitude!" The filmmakers drop hairpin hints: a lavish lifestyle, concern for her adult daughter's career and a nagging sense she's never been taken seriously as an actress or accepted into comedy's angry-man fraternity.

Think she's happy as a pioneer? Think again! "If one more female comic says, 'You opened doors for me.' Go fuck yourself!" This is an ideal gift for someone contemplating a show-biz career. (Closing night, Castro, 5/6)

The Loved Ones - For this teen horror joint from Down Under, writer/director Sean Byrne provides the right amount of sweaty adolescent backseat sex, the proper skinny-boy, disheveled hero/victim (the brooding Xavier Samuel), and a

Carrie-worthy vixen (a ferocious Robin McLeavy) overflowing with thwarted dreams and a propensity for confusing prom night with Halloween. Throw in a sacrificial canine, a wickedly improper daughter/father relationship (compare this to Kick-Ass), the criminal misuse of a tool kit, flesh-eating zombie boys and a misappropriated police cruiser, and you may find yourself screaming, "Throw that fucker into reverse and see what she can do!" Employing a classic Aussie lack of propriety in the clinches, Byrne allows us to root for a split-ends, bad-hair guy to survive the date-rape prom night from hell. (Castro, 5/2; Kabuki, 5/6)

Wake in Fright - Ted Kotcheff's restored first feature reportedly produces some surprisingly queer hijinx in a let-it-all-hang-out spoof on life in the Outback. A well-mannered schoolteacher gets some rude party-down lessons from a gang of bumpkins led by Donald Pleasence. (Kabuki, 4/30; Clay, 5/2)

Ride with the Devil - Ang Lee's first Western (from 1997), a bloody lost chapter of our Civil War, features a stellar Young Guns ensemble. Tobey Maguire shines as an idealistic German American teen, fighting with Southern guerrillas in Bloody Kansas, who undergoes a change of heart after bonding with a newly freed slave (Jeffrey Wright).

The acting gem in this two-and-a-half-hour epic is the hair-raising rivalry between Maguire and a feral young killer. Jonathan Rhys-Meyers imbues his Pitt Matheson with the cultural/racial mojo we associate with flying the Confederate flag. The young Irish actor, with his skinny torso, angular features, unruly hair and cold eyes, becomes an androgynous Clint Eastwood, mining a scary bi-polar charm that foreshadows the transformation of soldiers into outlaws (Billy the Kid, Jesse James), as well as a preview of his tennis-pro killer in Woody Allen's Match Point. The "Tobey/Johnny" showdown displays a screen chemistry that could have produced an alternative Jack and Ennis if Lee had gotten the Brokeback gig a few years earlier.

Writer James Schamus adroitly employs language to undercut this re-fighting the Civil War from a Southern perspective. "Johnny" is simultaneously sexy and menacing as he spits out Tobey's derogatory screen nickname "Dutchie" with murderous intent. Maguire's first adult role (and sex scene) has him projecting an inner decency while shedding puppy-dog innocence: a screen test for Peter Parker. (An Afternoon with James Shamus, Kabuki, 5/1)

Northless - A young Mexican man's (the genial Harold Torres) dogged pursuit of life across the border shifts from a textbook exercise in muted social realism to become a fascinating battle of wills, with writer/director Rigoberto Perezcano conjuring an out-of-left-field ending worthy of the Duplass brothers. (PFA, 4/25; Clay, 4/30; Kabuki, 5/5)

Restrepo - Fresh from Sundance acclaim, Sebastian Junger and Tim Hetherington reportedly have created the doc equivalent of The Hurt Locker as they channel the boredom, chaotic terror and macho camaraderie experienced by soldiers of the Second Platoon, trapped in a valley once considered vital to US victory in Afghanistan. Ironically, the film arrives as The New York Times reports the military's decision to abandon Restrepo due to its indefensibility and irrelevance to the struggle for hearts and minds. (Kabuki, 4/30, 5/4; PFA, 5/2)

Lebanon - Waltz with Bashir's Samuel Maoz sticks us inside an Israeli (IDF) tank as four sweaty, grumpy soldiers roll into danger during the 1982 War in Lebanon. Maoz mixes the claustrophobic anti-war message of the German sub thriller Das Boot with an even more despairing view of young men unraveling under fire. Maoz shows how the oddly egalitarian nature of the IDF can actually make life in a rolling, armored roach motel all the more intolerable, because it's harder to blame higher-ups for your fate. Maoz doles out snippets of black humor, such as the painted mural of the twin towers on the ruined walls of a Lebanese travel agency. (Kabuki, 5/2, 5)

Cairo Time - You may never see Cairo the same way again after it plays itself in Ruba Nadda's low-key thwarted romance. See this one for Patricia Clarkson and Alexander Siddig's take on a Cary Grant/Deborah Kerr-style week to remember. Nadda unsparingly shows the boorishness of Cairo men when an exotic (to them) woman plops down in their midst. (Kabuki, 4/28, 29)