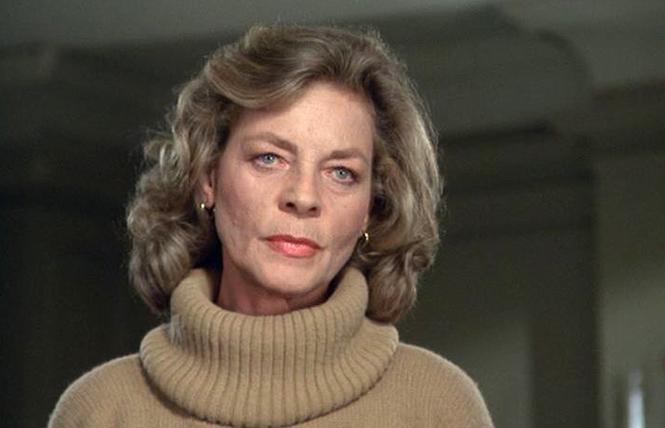 Released in 1981, "The Fan" was a star vehicle for middle-aged superstar Lauren Bacall, who was basically playing herself, a middle-aged superstar. Bacall plays Sally Ross, who, during rehearsals for a new Broadway musical, finds herself on the receiving end of unwanted affections from a stalker fan who loves her a little too much. The final cut upped the blood-and-gore factor at the request of producer Robert Stigwood — the film was released in the aftermath of the notoriously bloody and hugely popular slasher film "Friday the 13th" (1980).

"The Fan" has a creepy opening. As the camera glides across a table covered with mementos of Ross, the sound of a typewriter can be heard. In voiceover, Douglas, the fan (Michael Biehn), writes a letter in which he expresses his love for Ross, telling her that her happiness is all that matters to him. It's obvious from the beginning that this is no ordinary fan, but one who expects his unhealthy love to be returned. 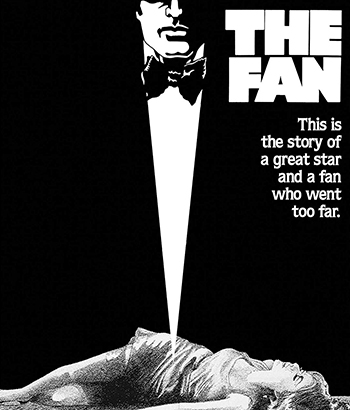 Ross is soon warned of this fan by her secretary Belle (Maureen Stapleton), but she doesn't heed Belle's advice. Before long Douglas, enraged that Ross hasn't responded to any of his letters, begins stalking Ross' friends, slicing them with a knife in order to get them out of his way. Ross is forced to face the realization that she's dealing with a deranged psychopath, and that she herself may be the next target of his wrath.

"The Fan" received some media attention upon its initial release, coming as it did less than a year after the murder of John Lennon, killed by an obsessed fan outside the Dakota, the apartment building in Manhattan where both he and Bacall lived. It was not a success at the box office. Newly released on Blu-ray, the film might be worth a second look for the magnificent performance given by Biehn as the obsessed, lovesick fan.

Biehn is absolutely terrifying as a young man who lives only for Ross. The cold expressions on his face as he zeroes in on his victims are terrifying. Biehn's performance is particularly impressive since he plays most of his role in pantomime. He spends most of his onscreen time alone, thinking about Ross or tailing after her friends. He has almost no dialogue, but is primarily heard in voiceover, reading his sick letters to Ross. One brief scene he does share with another actor comes when his sister attempts to visit him at his apartment, expressing concern for his well-being, but he refuses to let her in. He locks his door and sits down to a candlelight dinner at a table set for two. He lifts his glass and toasts his beloved Sally. But the other chair is empty, which he seems oblivious to. It's a cringe-inducing scene, underscoring the depth of Douglas' sickness.

Bacall does good work as Ross, effectively conveying the character's mounting terror. Bacall was an old-school movie star. She had that indefinable "it" that makes it impossible to look away when she's onscreen. But it may have been a mistake for the screenwriters to have made Ross' new show a musical: Bacall just can't sing! Superb character actress Stapleton steals a few scenes as the wisecracking secretary.

There is a touch of homophobia in the film. In one of his letters to Ross, Douglas snidely suggests that secretary Belle may have "lesbian tendencies." And in one disturbing sequence, Douglas picks up another young man in a gay bar. He kills the young man and sets his body on fire, leaving an apology note to Ross with the body. He stages his own death in order to throw the police off his trail. It's a scene that might anger some gay viewers, and would never be accepted were the film made today.

Scream Factory's Blu-ray of the film includes a generous extras menu. Biehn, who went on to star in "The Terminator" (1984) and "Aliens" (1986), sits down for a newly shot 25-minute interview. His memories of the film include his recollections of Bacall, who, as he tells it, was less than gracious to him. Director Edward Bianchi, who was primarily a television and commercial director, chats for nearly 40 minutes about his own memories of the film. He recalls Bacall as "tough." Apparently, she was against the violence in the film and wanted the film to be more of a character study of her role. There's also a commentary track with film historians David Del Valle and David DeCoteau, both of whom are openly gay. Among other things, they discuss the film's appeal to gay men. They acknowledge the homoeroticism and the homophobia of the gay murder scene, and suggest that Douglas might have been gay, which Biehn also discusses in his interview.