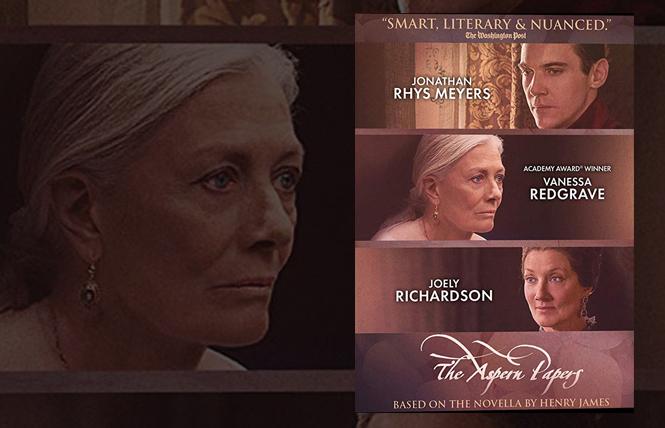 In their heyday (1982-2000), the sophisticated, independent gay personal-professional partnership of Ivory & Merchant was the most successful team in adapting literary classics to film, especially E.M. Forster and Henry James, tailoring three of his works, "The Europeans," "The Bostonians," and "The Golden Bowl." Merchant/Ivory changed story elements, added or removed characters and scenes, but always remained true to the point of view and tone of voice of the author. So it was exciting news when it was announced that James Ivory would be one of the executive producers of the new film based on Henry James' 1888 mystery novella "The Aspern Papers" (Cohen Media DVD), with the hope of recreating some of that classic Merchant/Ivory magic. Alas, Ivory's fingerprints seem as nonexistent as James', the final result a missed opportunity.

In Venice, ambitious American editor-biographer Morton Vint (Jonathan Rhys Meyers) is fascinated by long-dead poet Jeffrey Aspern (based on Percy Shelley), both his poems and his wild personal life. He rents rooms in the dilapidated palazzo home of Juliana Bordereau (Vanessa Redgrave), Aspern's former lover and muse, pretending he wants to revive the abandoned gardens. Suspicious of his motives, Juliana consents only when he agrees to pay an exorbitant rent. His real goal is to get possession of possible love letters Aspern wrote to Juliana. Now a recluse, Juliana has no intention of sharing these documents with any literary critic. So he resorts to courting Juliana's middle-aged, unwed niece Tina (Joely Richardson, Vanessa's daughter by bisexual director Tony Richardson), who is also her caretaker, in the hope she will lead him to the letters. Believing Vint is wealthy, Juliana encourages him to spend time with Tina, who relishes his attention. In a contest of wills, she must decide whether to remain loyal to her aunt or give into her desires for Vint and give him the letters.

The Redgraves bring their own James legacy. Vanessa's bisexual actor father Michael adapted "Aspern Papers" for the stage in 1959. In 1984, Vanessa won an Olivier Award playing Tina in the London production, and can now play Juliana to daughter Joely's Tina. With all that pedigree, this version should have been a winner. Both Redgraves are magnificent, with steely, shrewd Vanessa ferociously protecting her right to privacy to camouflage a sense of personal loss, and Richardson's repressed character becoming aware of her own romantic feelings and agenda. They are the sole reasons for seeing this movie.

The film lacks two elements essential to the novella: suspense and paranoia due to claustrophobic surroundings. The script fails to explore why Vint is so obsessed with Aspern. Is it his poetry or his scandalous bisexuality with another Romantic poet in a menage-a-trois with Juliana? Sex is hinted at in gratuitous soft-core flashbacks that recall pseudo-arty Calvin Klein underwear ads. The homoerotic element is veiled in the novella (James was a closeted homosexual). You have a man having to go through two women to pry into one man's possible romance with another man. This is made somewhat explicit in the film with Vint dreamily fantasizing kissing Aspern. But his motives aren't explored, and there are unexplained dream sequences of him being chased by his own Doppelganger, maybe because director Julien Landeis once made a short on that topic.

The other fatal flaw is the miscasting of Jonathan Rhys Meyers as Vint (unnamed in the book). In Rhys Meyers' raspy American accent, his stilted line readings lack nuance or emotional expression. Vint comes across as unlikable, although the novella's reader is supposed to empathize with him. One wonders why even the sheltered Tina would be attracted to such an arrogant manipulator.

James was critiquing the cult of celebrity, fans more interested in scandal than art, a contemporary theme. The film may inspire viewers to read James to fill in the film's plot holes. But for James aficionados, Cohen Media recently restored Merchant/Ivory's 1984 "The Bostonians," starring Vanessa Redgrave, and will release it on Blu-ray.