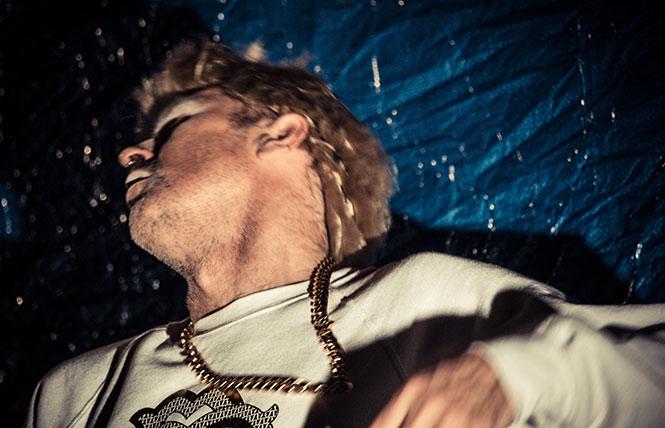 The orange life-jacket I was struggling to strap myself into last Friday night at Keith Hennessy's "Sink" really had washed up on the shore of Lesbos (I asked), though it seemed at the time too new, the same "Gulf orange" as all the others, no sun-bleaching, no mold, no dirt. But it did make me realize as I tried to squeeze into it and failed to buckle it up (one strap was missing) that if I had been struggling in the waves, lost at sea between home and asylum, I wouldn't have been able to swim at all, but just tread water.

You get the picture. This kind of performance art actually uses the torturer's methods to create sympathy, to put you in the situation, let you imagine what horrors await you, and then give you a small taste of it and leave it to your imagination. It was only in hindsight that I realized the whole piece was about sinking, for we sank into lulled states again and again, memorably a) to a lullaby made by Marc Kate by extracting samples from a neo-Nazi heavy-metal song, which Hennessy danced to in a mellifluously lulling way, and even more memorably b) as he climbed up and up a silver-glistening tree, with fruit of Mylar emergency blankets, via a series of hammocky-slings, a soft-rope circus-art dance that put me in mind of "Swiss Family Robinson" or even more of "Green Mansions": Rima, the bird girl, swinging through the trees of the Amazon. Hennessy rigged it himself.

Only for us to be hauled out of the calm to alarming bouts of neo-shamanist stomping or ranting: first, as he strapped on spring-stilts and sprang about among us - did I mention that the whole audience was now on stage, ringed about this stomping ground? - to Sylvester's disco anthem "Make Me Feel" while wearing a fringed, piebald corset and a huge leafy mask. It's a heady remix of ritual dance and tribal-rock/disco that distinctly referenced the stilt-dancers' costumes worn by Les Ballets Africains. The last outburst was the climax of the event, a huge rant in the style that Ginsburg used to recite "Howl," accompanied, Ginsburg-style, with a harmonium wheezing out a drone bass. Hennessy chanted in an opera-strength voice a long litany of place names: "Orlando," "Las Vegas," "Sandy Hook" - which I realized with dismay was a name I'd found on Genealogy.com where my family once lived. "You can't save them! You can't even defend yourself." A friend feared for Hennessy's vocal cords, hearing echoes of Tibetan throat-singing in his tones, though I didn't. 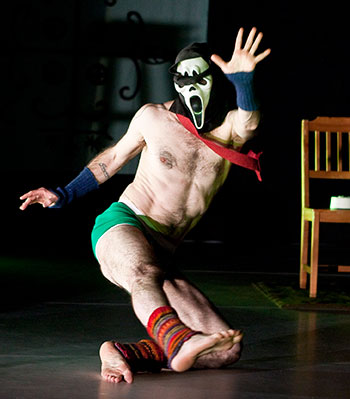 Hennessy is as much a dramatic poet as a movement-artist; he knows how to mix the media. Or should I say, a snake-oil salesman. But his style is answerable - the ends do justify the means. I believe that. He works in the tradition of William Blake ("Songs of Innocence") and the prophecies that go back to "King Lear": "Expose yourself to feel what wretches feel."

He bullies the audience like a preacher, then lulls us until the next outburst catches us off-guard. But the whole has been brilliantly prepared, and I for one go along for the sake of the argument, and because in 30 years he's never steered me wrong. He uses audience-participation as a revivalist would: once one person comes down to get saved, the rest will follow. First a dozen of us come onto the stage to put the life-jackets on, then everybody else ends up ringing the space, a little dazed as we look at each other and seek something more appropriate to focus our gazes on. The kind of gaze you're allowed to train on actors is called "leering" if you do it to a stranger. He keeps us precarious, and that's the point. If you were born here, it doesn't make the land yours, even if you love it.

Hennessy knows very well when to make us wait and when to reappear, when to change costume in front of us and when to show up looking like vanilla ice cream, complete with blonde wig, and swaying with uncharacteristic lullaby softness. He's really a wizard of a performance artist and fully deserves the Guggenheim Fellowship, the numerous Izzy Awards he's won in the Bay Area over the last 30 years, and the Bessie he won in New York (that city's highest award for contemporary dance) for "Crotch."

It's characteristic of performance art to transgress the audience's boundaries. Suggestible sap that I am, I was drawn into the induction that had begun very subtly, at the beginning, as he instructed us in the proper etiquette for performing on land that once belonged to the Ohlone, and had us converse with a neighbor "whom you don't know already" about where you came from, and whose lands they had been before our families brought us into this world.

"Sink" has had its run; this weekend he revives "Crotch" for its 10th anniversary, the piece that won him the Bessie. "Crotch" will be shown at the Lab, 2948 16th Street, SF. Buzz is fantastic, so it might be smart to get your tickets soon.

One last remark: nothing I saw at San Francisco Ballet's festival of contemporary dance last month felt as contemporary as "Sink." Just sayin'.