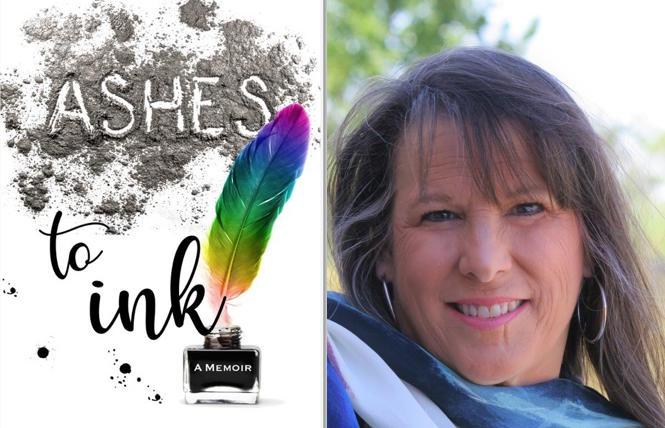 In Ashes to Ink, Lisa Lucca has written a moving memoir in which she recalls coming to terms with her gay dad. Lucca not only learns to accept who her father is, she comes to the realization that, in spite of the problems they had, she and her dad loved each other as best they could.

In addition to sharing memories of life with her dad, Lucca writes about her own search for love, which she sometimes looked for in the wrong places. She vividly recalls her marriage to a man who did not satisfy her, a man who lived his life on the road and often left her alone with their young son. When she finally made the choice to end that relationship, she found to her horror that her husband was spiteful and vindictive and didn't seem to care much for their child. It was a bitter pill to swallow, but Lucca held her head up high and did whatever she could to earn a living and to provide a good life for herself and her son.

Lucca doesn't hold back when she writes about her dad. She recalls a father who might have loved her lesbian sister more than he loved her. Passages in which she expresses her feelings regarding this situation are deeply emotional. It must have been a hard book for her to write, yet Lucca remains candid throughout the book. Readers will come away feeling that they know the author personally.

She is not afraid to express how she feels regarding her father's sometimes perplexing behavior. Her father visited her when she was living in San Francisco. She's shocked when he moves to the city a mere two weeks later to live with a man he had just spent a night or two with. But through it all, whether their relationship is going through a rough patch or not, her love for her father, and her desire to be loved by him, is apparent.
In an interview, Lucca said that she's heard from readers who have gay parents.

"I have heard from others who are younger than I am," she said. "One is straight, and the other is gay. In both cases, they were less affected by their parent coming out since there was more social acceptance in the past 15+ years. I talked to one spouse who said she was hit hard by the news, and her sons had a tough time, teenagers, with one rejecting his father for months. A gay reader shared that reading the book made her think more about her family's acceptance of her."

Lisa Lucca with her father as a child, and as a young adult.

Lucca has been journaling since her youth. She has always known, ever since her parents divorced and her father came out, that she would one day write about their relationship. Since the book is set in decades past, Lucca sometimes employs language that was the vernacular of that period, including language that would not be considered acceptable today. In a brief note at the beginning of the book, Lucca assures her readers that she in no way condones the use of anti-LGBTQ slurs of any kind. She has not received any negative feedback for the use of that language. She has in fact become friends with Jordan Budd, executive director of Colage, the national organization for the children of lesbian and gay parents.

"We had a really good conversation about it," she said of Budd. "Those were the words. It was Archie Bunker, this is how I learned anything about any sort of orientation other than mom and dad in 1960s mid-America. I have not heard one negative thing from anyone about those words. I just want to be clear that those aren't words that I would ever use now."

Lucca is very happy with the reaction she's gotten from readers.

"I think the biggest thing that I hear from anyone who's read it is that that there's a real raw emotional honesty in it, which is exactly what I wanted readers to experience," she said. "This feeling of no matter where you are in your family situation there's room for understanding our parents as people and being understood as people when we're parents. I think the idea of love and sexuality, especially for single parents is one that isn't talked about a whole lot. It's really hard to navigate those waters."

She can now see that her father's world was very different than the world she came from.

"He exposed us in a way that was not necessarily popular back then," she said. "I had a lot of bad reactions to it, but by the time I was a single mom I really gained understanding of him because I was able to see that this is how it is when you're 35 and you're newly divorced and you want to have some sort of romantic life and you're a parent, and how do you do that?"

The book, she feels, has a universal message that can apply to any parent/child relationship, regardless of whether or not the parent identifies as LGBTQ. The message is one of acceptance.

"Even if they're different from us, have different beliefs, different ideals, values even, that by accepting who they are and accepting who we are, we can have a much more tolerant relationship with our family," Lucca said. "Even if it doesn't mean that we're close, it means that we're not at odds, because I was at odds so much with my family over the years by feeling misunderstood that when I finally accepted that they didn't see the world and vice versa in some ways it created this lovely truce."

Ashes to Ink is now available in paperback and Kindle editions.