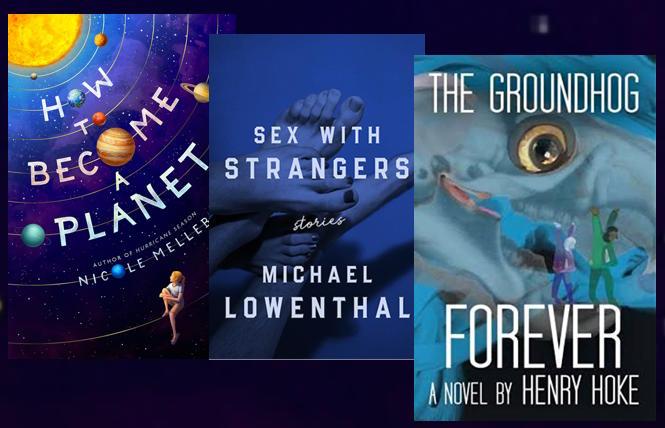 Consider the wide variety of LGBTQ fiction books published this year that showcase our diverse lives, and our diverse forms of storytelling, from mysteries to Young Adult, fantasy and classics rereleased.

Sex With Strangers: Stories (University of Wisconsin Press), the first short story collection by gay novelist and educator Michael Lowenthal (The Paternity Test and others) is populated with characters, gay ("Over Boy," "Thieves," "The Gift of Travel") and straight ("You Are Here," "Uncle Kent," "Stud"), with sexual goals in common.

In The Kingdoms (Bloomsbury), the fourth novel by Bath, England-based Natasha Pulley, amnesiac Joe Tournier time travels from late 19th-century London to the Napoleonic Wars with a mysterious postcard in his possession and a "forbidden queer romance" on the horizon.

Legendary queer writer Virginia Woolf's 1925 novel Mrs. Dalloway (Penguin Books), which tells the tale of Clarissa Dalloway, and former loves including Sally Seton, gets a deluxe edition reissue, complete with a new foreword by Jenny Offill and introduction and notes by Elaine Showalter.

Lambda Literary Award-winning gay writer Michael Nava, best known for his series of mystery novels featuring gay Latino criminal defense lawyer Henry Rios, returns with the 11th Lies With Man (Amble Press), set in 1986 Los Angeles when right-wing Christians have put an initiative on the ballot to quarantine people with HIV in camps resulting in the bombing of an evangelical church.

How to Become a Planet (Algonquin Young Readers), the new Young Adult novel by Nicole Melleby, draws readers into the orbit of 13-year-old main character Pluto Timoney, newly diagnosed with anxiety and depression just as she develops her first attraction to a contemporary probing her own gender identity.

Inspired by stories of the early days of AIDS and the difficulties of placing positive children in foster care, the novel All the Children Are Home (Harper Perennial) by Patry Francis introduces us to fictional foster parents extraordinaire Dahlia and Louie Moscatelli. 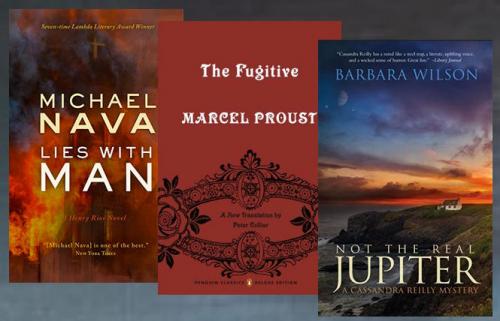 Boasting a new translation by Peter Collier, The Fugitive (Penguin Classics, 1925/2021), the sixth book of French homosexual writer Marcel Proust's most overtly queer multi-volume work In Search of Lost Time, has arrived in advance of the 100th anniversary of Proust's passing in 1922.

Set shortly after the landmark Supreme Court ruling on marriage equality, Let's Get Back to the Party (Algonquin Books of Chapel Hill), the debut novel by Zak Salih, examines what it means to be a gay man today by following the story of the continually intersecting paths of childhood friends Sebastian and Oscar.

Award-winning lesbian mystery novelist Barbara Wilson has the distinction of having had one of her books, Gaudi Afternoon (in which we were introduced to sleuth/translator Cassandra Reilly), made into a movie (starring Judy Davis and Marcia Gay Harden!). Not the Real Jupiter (Cedar Street Editions) is the fifth of Wilson's Cassandra Reilly mystery series.

As a Gen X trans woman who lived on the street for nearly five years, Sybil Lamb knows what she's talking about when it comes to writing about homelessness, as she does in her illustrated YA novel The Girl Who Was Convinced Beyond All Reason That She Could Fly (Arsenal Pulp Press, 2020), the story of a young homeless girl named Eggs.

Experimentation and magic realism converge in The Groundhog Forever (WTAW Press) by Henry Hoke (a cousin of the late Tallulah Bankhead), a constantly morphing novel about a pair of queer film students (Thing 1 and Thing 2, seriously) in early 21st-century Manhattan who find themselves trapped in a Groundhog Day sequel.

Taking inspiration from the 16th-century European tapestries known as "The Hunt of the Unicorn," on display at the Met Cloisters, lesbian writer Janet Mason has crafted the novel The Unicorn, The Mystery (Adelaide Books), told from the viewpoints of a monk and, of course, a unicorn.

For Face: One Square Foot of Skin (Akashic), her second book following 2018's Fame: The Hijacking of Reality, actor turned writer/director/producer Justine Bateman presents a series of fictional vignettes based on interviews, addressing the "root causes for society's own negative attitudes towards women's older faces."