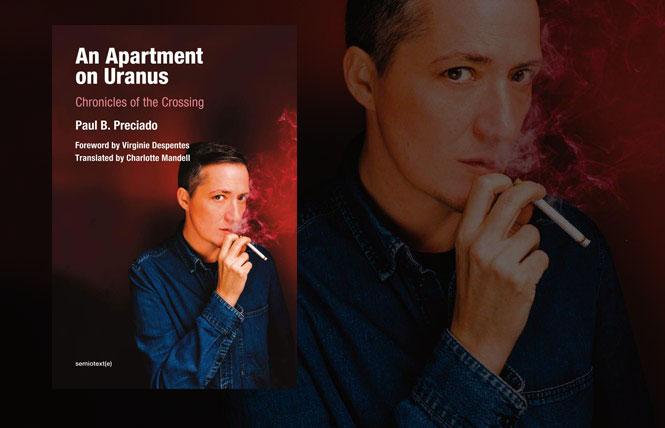 "An Apartment on Uranus: Chronicles of the Crossing" by Paul B. Preciado, translated by Charlotte Mandell; semiotext(e), $16.95

Uranus is the coldest planet, covered in ice, named after a Greek deity. The word "uranism"was coined by German writer and gay rights pioneer Karl Heinrich Ulrich in 1864 from the planet's name, to define the "third sex." "An Apartment on Uranus" strives to fathom the expansiveness of unadulterated self, inevitably free from any single identity. This is an essay collection ahead of its time, but right on time, a dissection of the individual's attachment to identity.

"Life begins and ends in the unconscious; the actions we carry out while fully lucid are only little islands in an archipelago of dreams," writes Paul B. Preciado. Born Beatriz Preciado in Castile, Spain, now a trans man living in Paris, he works as a writer, philosopher, and curator. He writes, "My trans condition is a new form of uranism. I am not a man. I am not a woman. I am not heterosexual. I am not homosexual. I am not bisexual. I am a dissident of the sex-gender system. I am the multiplicity of the cosmos trapped in a binary political and epistemological system, shouting in front of you. I am a uranist confined inside the limits of technoscientific capitalism."

This collection is manifesto, human rights declaration, and trans agenda. The author writes in a punk intellectual aesthetic, with a background in radical philosophy. He studied under Jacques Derrida at the New School in New York, earning a Ph.D. at Princeton. Preciado's focus is on identity, gender, pornography, architecture and sexuality; he learns these subjects, and lets them take new forms. He has done the same with his own life. Written between 2013-18 in locations all over the world, he writes, "I consulted the Wikipedia page on Uranus: it is in fact one of the most distant planets from Earth." He imagines himself living there, in an apartment on Uranus.

In the essay "Forgetting the Idea of Being Special," he writes, "On the Internet, hypnotized, I watch the World Population Clock spinning. 7,381,108,786 [written in 2016]. During the time it took to write this number, the number on the world clock has changed. Two new actors enter onto the stage every second."

Hidden within the text is a jarring call to detach, drop our labels, and redirect. Preciado understands the feeling of being male, having begun his transition in 2010. "Preciado shows us the dangers and wonders of the complete and radical transformation of self," said his translator, Charlotte Mandell, in an email interview. "He is interesting to me in his desire to go beyond the self, beyond labels. At a time when we as a culture are so caught up with identity politics, it is powerful and refreshing to be reminded that beyond nameable identities, there is the actual self. For him, taking testosterone is a political act."

One of the lightest and brightest of the essays is "Love in the Anthropocene," in which he writes of his true love, named Philomene, of the animal species Canis lupus familiaris: Preciado's dog. He flew 435 miles round-trip for the sole purpose of seeing and touching Philomene and affirms, "I am familiar with canine love." There's a feeling of connection to the wider world at a much-elevated level: of knowing living creatures as equals.

This is a book for the true New Age, relevant to LGBTQ people leading the charge of identity politics, challenging the status quo. To the larger human community, often unaware, Preciado beautifully pleads, "Wake up."