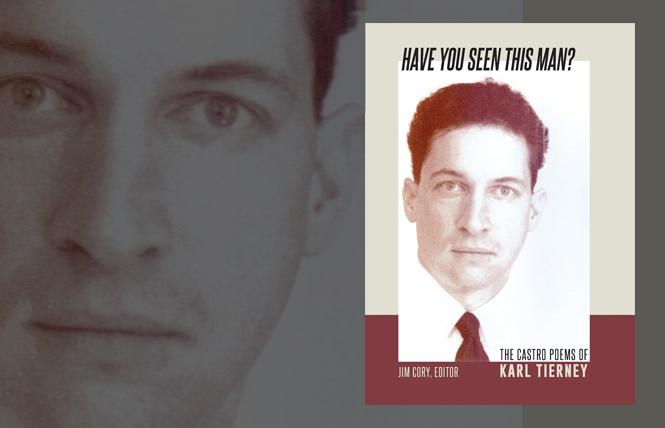 The publication of "Have You Seen This Man? The Castro Poems of Karl Tierney" is a major event. It re-introduces the long-silenced voice of a writer who had a special ability to grasp the fine madness of his time and place on the planet.

Born in Westfield, Massachusetts in 1956, raised in Connecticut and Louisiana by loving parents, Karl Tierney got a feel for his country's potent mix of center-right politics and radical cultural roots early on. Visitors to Karl's South of Market basement flat would be treated to an eclectic mix of political tracts and pop culture artifacts, including a framed Life magazine cover with the headline, "13 Years After the Death of Elvis Presley, New Evidence Points to an Inescapable Conclusion: Suicide!"

The New England Yankee-raised poet was a Southern-influenced writer thanks to stints at Atlanta's Emory University and the University of Arkansas. He was capable of tartly comparing the romantic flings of 80s/90s-era "Castro Clones" with the lives and customs of the Ancient Romans, in a March 8, 1990 poem entitled "Justinian":

Tierney was equally adept at sticking a sharp fork into the pretensions of fellow queens at popular watering holes like the Cafe Flore, in "Cafe Hairdo" (March 16, 1991):

In addition to providing a thoughtful introductory essay, editor Jim Cory dates each of the 74 poems in this volume, published nearly a quarter-century after the poet's October 1995 suicide. The poems, like their author, often feel ripped from this world prematurely. Tierney was 39 on the day he peddled to the Golden Gate Bridge, leaving his bike by the railing and a short note along with his wallet and ID on his kitchen table. Tierney was depressed by his failing health and by the fact that he had been denied entry into a 1995 AIDS drug trial. The decision was later rescinded, but too late for Tierney's sake.

As a poet, Karl would have rejoiced at the opportunities available in the time of Trump to snipe at our political classes. That's evidenced by the following poem titles: "Caligula or Nixon Leaving," "You Remind Me a Little of Napoleon" and "My Alma Mater Honors a Whore of the Republic."

Karl Tierney was a fitness freak, and our friendship grew out of our producing a short film, "Bodybuilder," inspired by his poem. Our film was based on the theory that for every "gym bunny" sweating away, there might well be a "gym widow" suffering at home. The film had its New York festival debut right about the time I learned of Karl's disappearance. The title "Have You Seen This Man?" derives from the headline on the missing posters his friends plastered throughout the city. Karl's body was never recovered. Tierney leaves behind more poems and an unproduced screenplay, "A New Face."