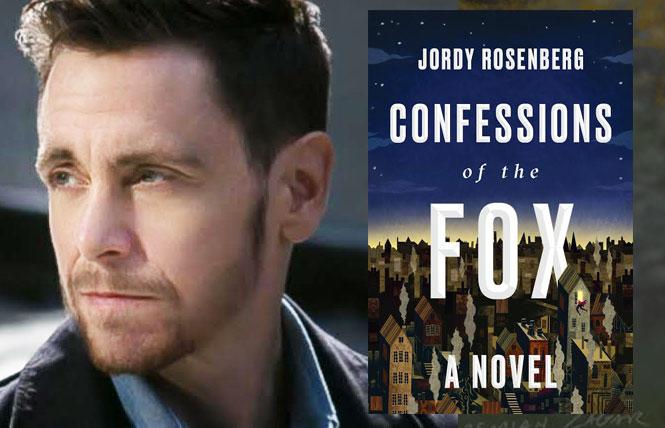 Jordy Rosenberg's "Confessions of the Fox" comes as a sharp reminder of the undervalued business of reading for pleasure. Rosenberg is many things: a trans professor at the University of Massachusetts, Amherst, specializing in 18th-century English literature, and with this rollicking, ribald debut novel, one of the first trans novelists to be published by a Big Five publisher (One World, an Atlantic/Random House imprint). Supremely, he is a born, now accomplished fabulist.

There is prodigious postmodern juju going on between the covers of this entrancing book, much of it of high erudition, if sometimes deeply interred. But you need only read English to revel in it. It's one of those rare books you can decide how far to get in bed with.

Anyway, there are footnotes. Footnotes? Have we here a David Foster Wallace foundling? Yes and no, the duality at the book's beating, not infrequently bleeding heart. The conceit - call it layer #1 - is a manuscript discovered at a university bookstore sale, perhaps the ur-fable of Jack Sheppard, a legendary thief of 18th-century London who may or may not be - the ontological principle of this book's every page - the legendary rogue Berthold Brecht remade as Mack the Knife.

Few sexual thrills top the academic's wet-dream of nabbing a "found" manuscript, which - level two - is that of our present-day interlocutor, Professor R. Voth. He's surely a stand-in for Rosenberg to some degree, a rakish, befuddled academic as preposterous and antiheroic as his Subject (capitalized words appear at random in the "manuscript"), doing battle with his editor and potential publisher, the "Dean of Surveillance."

The footnotes - which the reader comes to crave like a dog waiting for morsels to fall from the master's table - begin, with faux innocence, as Voth's translations of the period's rich, salacious sex slang, perhaps a cocktail of the real thing and Rosenberg's own fevered imagination. Quim, for pussy, and its dozen salty synonyms easily beats out the competition, and there's mollies for queer men. Tellingly, over the course of the two interlocking tales, quim turns out to be, more expansively, any "port of entry" in the sexual body, gender of no consequence - if everything.

The book's big story, Jack's, brings out the genre genius in Rosenberg. Like the gender-ambiguous knight in "Der Rosenkavalier," Jack, like the quim with which he is besotted, has a catalogue of names: Jack Sheppard, Thief of Thieves, Breaker of Latches, Nabber of Horses, Watches, Guineas, and Pence, Son of Eternal Night. He's closer to Robin Hood, with whom he shares a slippery social conscience, than to Mack the Knife.

There's irresistible comedy in his criminality, and all his swashbuckling does little to conceal the anxious antihero lurking beneath the curtains. His obsession with fucking in its myriad forms thinly veils his performance-related terror as well as excitement that underlies that. I may be staring into a Rorschach blot myself here, but somewhere near the core of his appeal is Jack the Everywuss.

And while we're on Rorschach, Rosenberg puts the craven cis-gender fascination with trans genitalia in plain view. Exactly where the Dean of Surveillance wants more of that - as if it were a uniform thing - Voth substitutes for the "missing page" a version of 18th-century novelist Lawrence Sterne's "marbled page," an image that stares back at you the more you inspect it.

In the arena of transition, there is the slapstick gore of the corrective surgery of Jack's dugs. The blood everywhere (and the inversion of the Adam's rib motif that also runs through the novel) notwithstanding, at the climax there's the quack surgeon's drunken collapse on his patient's chest.

To the rescue, as always, is Bess Khan, the dark-eyed South Asian doxy (surely you can guess) who is Jack's lodestar in this book rich with ships, sailors and cargo, and the tale's most deeply sympathetic character. She's as fascinated as anyone with Jack's "wild part," but is content to call it - and him - Something!

There's plenty of mucilage, sticky and otherwise, binding the novel's two levels, including Spinoza's "Ethics," a copy of which is Bess' bedtime reading. The "gentle" philosopher's work also points, not always obliquely, to the novel's deep if clandestine morality, its serious concerns with the plight, not just the capers, of the desperate poor and the menace of the ever-expanding police state.

Despite all the shenanigans, intellectual and sexual, Rosenberg's not fucking with you, the reader, in "this living diorama of flesh worship. The kind that only queers understand. We who have been given our lives for the love of flesh."

In his valediction, Voth declaims, "Dear reader, if you are you - the one I edited this for, the one I stole this for - and if you cry a certain kind of tears - the ones I told you about, remember? - you will find your way to us."