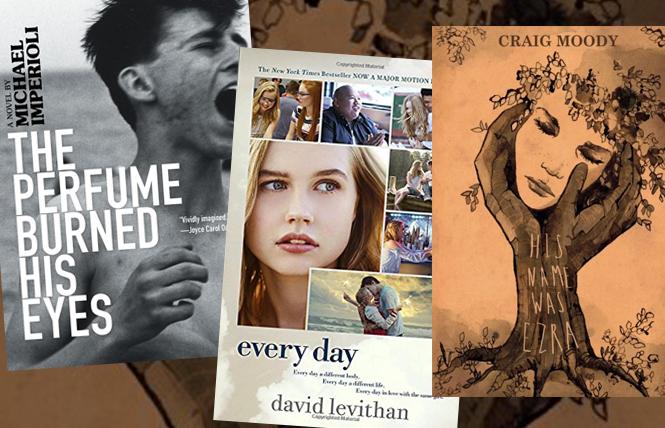 New voices: You probably recognize the name of Emmy Award-winning actor-turned-writer Michael Imperioli from his portrayal of Christopher Moltisanti in HBO's The Sopranos. Established as a screenwriter (Spike Lee's Summer of Sam), Imperioli makes his literary debut with The Perfume Burned His Eyes (Akashic), a novel in which 16-year-old narrator Matthew becomes enmeshed with the late rock legend Lou Reed and his trans muse Rachel.

Igbo and Tamil non-binary writer and artist Akwaeke Emezi makes her literary debut with the novel Freshwater (Grove), about Ada, born "with one foot on the other side," and her struggles when she's a college student in America.

Paul Takes the Form of a Mortal Girl (Rescue), about "shapeshifter" Paul, who wildly oscillates from "Riot Grrrl to leather cub" and from "Women's Studies major to trade" while traversing Iowa City, Boystown, Provincetown and San Francisco, is the debut novel by educator and editor Andrea Lawlor.

In poet Chip Livingston's debut novel Owls Don't Have to Mean Death (Tincture), Creek Indian Peter Strongbow's awareness of omens and healing brings him back to his family and community following the love of his life's AIDS diagnosis.

Y/A voices: Prolific gay Y/A novelist David Levithan has had his novels Nick & Nora's Infinite Playlist and Naomi & Eli's No Kiss List adapted into films. His 2012 novel Every Day (Ember) has been reissued with eight pages of color photos to coincide with the release of the movie version starring Angourie Rice and Justice Smith.

Set in 1977, when the only GSAs were high school theater departments, the novel One True Way (Scholastic) by Shannon Hitchcock tells the story of middle school classmates Allie and Sam, two "girls who like girls" who fall for each other against the backdrop of a small Southern town and changes in gay rights.

And She Was (Point) by Jessica Verdi introduces us to sheltered Dara and her single mom Mellie. At 18, with her future shining brightly ahead of her, Dara makes a shocking discovery on her birth certificate that could forever change her relationship with Mellie.

In Hurricane Child (Scholastic) by Kheryn Callender, hated and bullied Caroline, unlucky enough to be born during a hurricane in the Virgin Islands, must now contend with a new storm in her life, the arrival of new classmate Kalinda from Barbados, and the unusual feelings she has stirred up in Caroline.

Voices of experience: Originally published in 2011 by a small press, Ayiti (Grove), bi author Roxane Gay's beguiling debut story collection, compiles 15 stories that portend the writer who has become one of the most popular authors of her generation.

The transformation of Birmingham, Alabama trailer park resident Chester Davis into aspiring drag queen Daphne DeLight, and her quest for a crown and a title, are the basis for In a Whirl of Delusion (Chelsea Station Editions) by J.R. Greenwell.

In His Name Was Ezra (Vivid Imagery), gay writer Craig Moody's second novel following 2017's The 49 Indian, he takes on race relations in the era between the 1955 murder of Emmett Till and the 1964 Civil Rights Act.

Sexual identity and self-acceptance become a major throughline in Anatomy of a Miracle (Hogarth), the new novel by Jonathan Miles with the subtitle, "The 'True' Story of a Paralyzed Veteran, a Mississippi Convenience Store, a Vatican Investigation, and the Spectacular Perils of Grace."

Poet Jon Pineda follows up his 2010 memoir Sleep in Me with Let's No One Get Hurt (FSG), in which 15-year-old narrator Pearl, squatting with her father, a couple of his friends and her dog Marianne Moore, shares the events that forever change her life.

Based in Canada, Lambda Literary Award finalist Nairne Holtz is back with Femme Confidential (Insomniac), described as a "wry look at sexual freedom," finding yourself, finding your queer tribe and "the not-so-perfect girlfriend."

Michael Zadoorian's 2009 novel The Leisure Seeker is the basis for the new movie of the same name starring Helen Mirren and Donald Sutherland. Zadoorian's new novel Beautiful Music (Akashic) is set in ravaged 1970s Detroit, and focuses on the healing power of music.