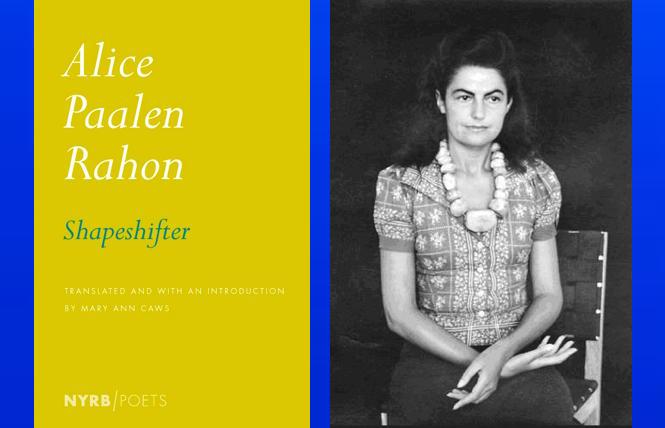 author Alice Paalen Rahon with a necklace by Pablo Picasso

Surreal, Surrealist, Surrealism. How often the words are used to describe an inner eddy of image and energy, cosmic forces, deep inner angels and avatars emerging from within, born into existence without. Enter Alice Paalen Rahon, frequently simply Alice Rahon, a Surrealist poet and painter largely overlooked but reemerging in a new compilation of poetry.

In the new complete collection Shapeshifter (New York Review Books), Rahon rises again, this time having found her true place in the world. She gave shape to Surrealism that didn't die with André Breton in 1966, or even eventually with the death of Salvador Dalí in 1989.

Alice Paalen Rahon was born in Chenecey-Buillon, France, June 8, 1904. Shapeshifter is the first complete compilation of Rahon's three books of poetry, most of them extremely rare and virtually impossible to find. One, Sablier couché - Reclining Hourglass, has only six known copies. Infused with mythology, magic, memory, meaning, Rahon's poems and paintings awaken psyche, soul, mind and the agency of primitive spiritual hauntings found in dreamwork. 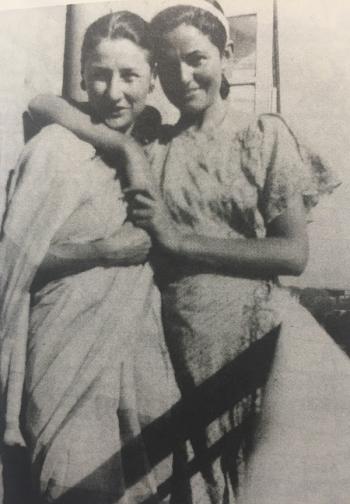 Valentine Penrose and Alice in India in 1936.

To understand the complex conditions of early 20th-century socio-cultural artistic movements in Europe from which she came, consider Futurism (beginning about 1909), Dada (commencing in and around 1916), and Surrealism (1919-1920 onwards). Not only overlapping in chronologies but in similarities, the developments contained in their artistic breakthrough possessed calls to smear and to blur one's self in the bewilderments and fantasies of art.

The art movements resisted the shackling madness of world wars and what followed, from the birth of the liberal Weimar Republic to the contrasting rise of Adolph Hitler in 1933, and the devastation that followed. Artists in these movements were driven abroad, many into exile. As Futurism largely died out due to its developing fascistic leanings -in 1924 the socialists, communists and anarchists walked out of the Milan Futurist Congress- Dada carried on.

Revealing stories, exalting mysteries
In 1917, Dadaist Guillaume Apollinaire introduced Soupault to Breton, the latter known as the principal theorist and father of Surrealism. In 1924, Breton issued the Surrealist Manifesto after having broken with Tristan Tzara and the Dadaists. By breaking with the group, Breton embarked on an adventure to marry Surrealist writings, particularly poetry, with painting. Breton envisioned poems as the voice of paintings, revealing stories, exalting mysteries displayed upon canvases and together, talismans to viewers.

Four years earlier, Breton and Soupault released the first book of Automatic Writing, The Magnetic Fields (New York Review Books, 2020). It was through automatic writing where Rahon found herself on multitudinous journeys across the globe and into her unconscious mind, where the Surrealists believed art lived and waited to be unleashed upon the world.

In 1936, Éditions Surrealistes published Rahon's first work, À même la terre - On Bare Earth, her first poetry collection which caught Breton's attention. That same year, during Rahon's journey to India, she met up with poet Valentine Penrose, whom she had first met in Europe. Her first reported love affair with a woman, Rahon's life enlivened, both women expressed lesbian attributes present in their work at that time.

Here, as collected in Shapeshifter, Rahon rattles the cage of love unrealized, love yearning for release. Taken from A même la terre - On Bare Earth: 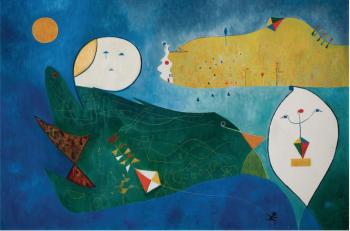 A painting by Alice Paalen Rahon

A deep camaraderie
Ultimately Rahon returned to Europe. Still married to Wolfgang Paalen, the two went on extensive travels through British Columbia and the United States. The photographer Eva Sulzer joined them at one point. Kahlo knew the Paalens and Sulzer were on the North American continent and invited them to Mexico City. The Paalens and Sulzer took up her invitation.

Kahlo and Alice Paalen Rahon found deep camaraderie in their physical impairments, both severely injured in the pelvic region in accidents during childhood. A shared love of canvas and color, their bond grew and Kahlo and her husband Diego Rivera invited the Paalens into their inner circle of artists in Coyoacan, the location in Mexico City of Casa Azul - the Blue House, Kahlo's family home she inherited from her father.

But in Mexico, unsettled inside, she began to turn away from writing and turned to the canvas. With Kahlo she was able to flower, becoming the brilliant painter she is known more so than as a poet. In reading Shapeshifter, one can find the two art forms are, in fact, inseparable, as Breton had seen them a hundred years ago. Riches fill the collection, photographs, poems that break out to prose and complete prose texts originally published in Wolfgang Paalen's art magazine Dyn.

Eventually, in 1947, the Paalens divorced and Alice changed her name to Rahon, spending the rest of her life in Mexico City. In her new home in the San Ángel neighborhood, not far from Kahlo at Casa Azul in Coyoacan, Rahon became a pivotal figure in bringing abstract expression to Mexico.

New York Review Books publishes vast collections of the finest literature in the world. The book publishing arm of The New York Review of Books, their published works are available at www.nyrb.com and at independent booksellers - City Lights in North Beach and Fabulosa in the Castro.