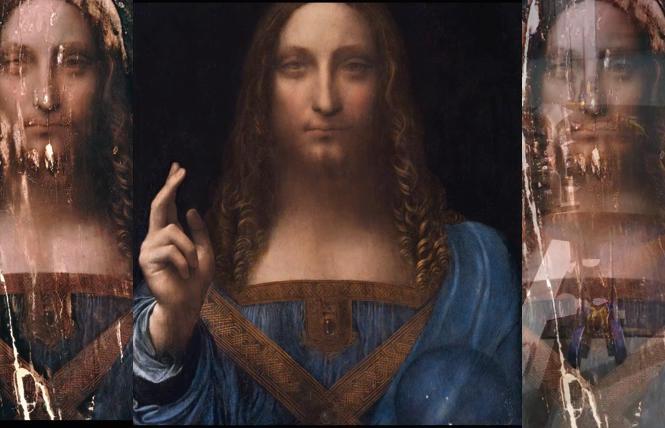 He is considered the greatest painter of all time, with only eight paintings definitively attributed to this Old World master. He was also gay, which sullied his reputation while he was alive. So it is both amusing and alarming that even Leonardo da Vinci, the Renaissance genius/outsider and now a global brand, takes a back seat to his artistic creation in the new spellbinding documentary, The Lost Leonardo, about the queer (in all senses of the word) journey of the painting Salvator Mundi.

Supposedly Leonardo's last masterwork, Salvator Mundi, at $450,300,000 in 2017, set the world record auction price, the most ever paid for a painting. One is reminded of the witty insight uttered by humorist Fran Leibowitz that at a Picasso auction, people were applauding the price the painting sold, not the painting itself.

Such wisdom also pervades the film, which plays out like a John le Carré real-life espionage thriller about how this incredible painting brought together great art experts, oligarchs, global billionaires, politicians, journalists, the FBI, and the top museums in the world in a demoralizing display of money and greed, rather than the celebration of the transcendent nature of art.

The contemporary adventure of Salvator Mundi, a painting of Jesus Christ as Savior of the World, begins in 2005, when Alex Parish and Robert Simon, sleeper hunters who suspected the poor condition artwork was worth more than originally thought, purchased it at a New Orleans auction for $1175. Then they gave the damaged painting to famed restorer Dianne Modestini, who removed the touch-ups, filled in the empty patches, and made it look almost like new. Modestini was convinced it's a genuine Leonardo because the way Christ's lip was developed resembled the same crafting as the enigmatic Mona Lisa.

Although many critics charged Salvator Mundi was more Modestini than da Vinci, the painting was sent to London's National Gallery where five Leonardo experts were asked to give their informal opinions about whether it was an undisputed Leonardo or primarily the work of one of his students at his workshop, making it less valuable.

The problem is that there's little provenance (the history of who owned the picture) before 1900 when a wealthy textile manufacturer purchased it. While Salvator Mundi might have been commissioned, possibly for France's Louis XII, even in Leonardo's own time, there's no evidence he painted it himself.

Art historians don't know what happened to the picture between 1500 and 1900. Not surprisingly, the five experts couldn't agree on its authenticity, but nevertheless the National Gallery in its 2011 blockbuster exhibition on Leonardo presented Salvator Mundi as a bona fide Leonardo. 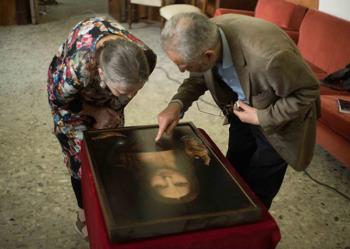 Dianne Modestini and Ashok Roy inspect the Naples copy of the Salvator Mundi in 'The Lost Leonardo.'

Salve Sale
Other museums tried to buy the painting, but it was eventually sold in 2013 to Russian oligarch Dmitry Rybolovlev through his art adviser Yves Bouvier, who acquired it from a consortium for $83 million. Unapologetically, Bouvier created a fake-auction ruse so he could sell it to Rybolovlev for $127.5 million, at a personal markup of $44.5 million.

Rybolovlev, claiming Bouvier had defrauded him for years to the tune of over $1 billion, in anger, decided to sell off all the paintings Bouvier had purchased for him and handed over Salvator Mundi to Christie's in New York for auctioning.

Christie's created a brilliant gimmicky global marketing campaign calling it the 'Male Mona Lisa,' including a slick video depicting people (some famous like actor Leonardo di Caprio) enraptured while viewing the painting. When it's sold for a record price, initially the buyer is anonymous, but soon the new owner was identified as Saudi Arabia's Crown Prince Mohammad bin Salman, who masterminded the execution of dissident Washington Post journalist Jamal Khashoggi.

The Louvre wanted to include Salvator Mundi on loan for its 2019 megahit exhibition marking the 500th anniversary of da Vinci's death, yet despite the intervention of French President Emmanuel Macron, the deal fell apart when Prince Salman insisted the painting be placed alongside the Mona Lisa in the show.

A secret 46-page booklet (whose publication was cancelled after the loan collapsed) detailed scientific examinations conducted by the Louvre, and appeared to confirm its authenticity.

Meanwhile Salvator Mundi hasn't been seen publicly since 2017 (either languishing on Prince Salman's yacht or in a Geneva tax-free storage facility) with Prince Salman possibly planning to exhibit the painting in a new cultural arts center designed to render Saudi Arabia a preeminent arts destination. 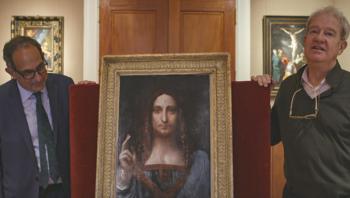 Robert Simon and Alexander Parish in 'The Lost Leonardo.'

Framing greed
The irony of this whole sordid history is while there's still no conclusive proof the painting is a genuine da Vinci, that hasn't stopped billionaires, powerful institutions, and countries from using Salvator Mundi for their own purposes, whether it be capital, a tool for geopolitical interests, or a bargainable commodity.

Director Andreas Koefoed views the controversy as commentary on how mercenary and money-grubbing the speculative art market has become. This gripping documentary's strength is allowing all these differing contradictory voices to air their opinions/interpretations and doesn't take any sides. It's not afraid to ponder the disturbing questions about the purpose of art this disheartening tale reveals, namely financial, political, or cultural gain.

The title is snarky clever, because not only is the painting lost to us, but so is Leonardo the artist. The painting does captivate its audience, but is it due to the Leonardo byline or the art's hypnotic sublime qualities, whoever created it?

Ultimately, it's the haunting ethereal look of Jesus in Salvator Mundi, who has the final say, judging all the deception, financial malfeasance, and hubris power the painting has aroused.

Another documentary, Savior For Sale: Da Vinci's Lost Masterpiece, which will open in theaters and on Apple and Amazon Prime on September 17, covers the same territory as The Lost Leonardo. It was made by French television and is being distributed in the U.S. by Greenwich Entertainment.

However, it's the lesser effort to the far superior The Lost Leonardo, for two reasons. Savior doesn't provide any context or history about the painting, assuming audiences already are familiar with the debate and its issues.

Secondly, the deeper questions about what this sorry saga says about today's excesses and ulterior motives are largely ignored. Savior is more intrigued by Salvator Mundi's lurid twists and turns as well as the accompanying media excesses. If you see only one film on this complicated irresistible chronicle, make sure it's The Lost Leonardo.