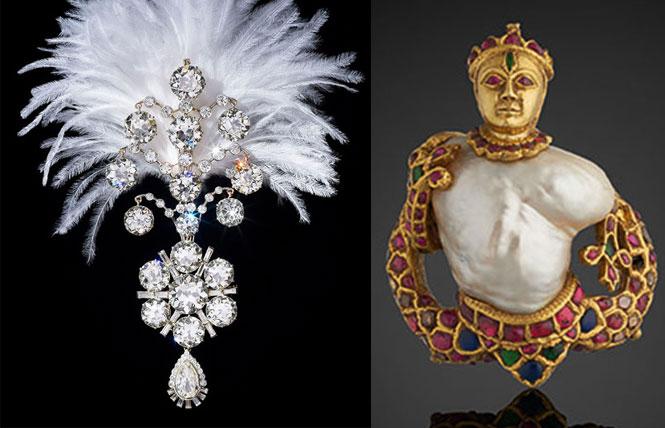 Not since the luxe Cartier and Bulgari shows has there been this much bling in one place. The occasion for this glittering, ostentatious display is the Legion of Honor's "East Meets West: Jewels of the Maharajas from the Al Thani Collection," a new exhibition that emphasizes cross-cultural exchange between India and the West. But let's get real: the bling's the thing. Underpinned by history and leading with a heavy ooh & aah factor, it features 150 precious stones, gold, jade and jewel-encrusted ceremonial objects, each of which, on its lonesome, could fetch more than a house in San Francisco. The bulk of the show's treasures descend from the Mughals, a dynasty of emperors and maharajas with Central Asian roots who reigned over India for 300 years, starting in 1526. Also included are pieces from the rule of the British Raj, from 1858 to 1947, which reflect Western influences, like Art Deco pieces favored by Indian princes with a taste for modernity.

One of the exhibition's more intriguing revelations is that, unlike the courts of Europe, in India it was not the women but the male rulers — sultans, nizarns, and royal eminences — who wore the jewels in the family, and in conspicuously copious amounts. (Sounds like grounds for a gender rebellion to me.) To underscore and broadcast their prestige, the imperial men covered their chests, and just about every available patch of clothing and skin, with a profusion of these splendid emblems of power, at once so dazzling, priceless and impossible to ignore, their high rank was announced to the world. The practice apparently impressed Louis XIV, who adorned his person and his saddle cloth with some of the 1,000 diamonds he purchased from India, which, until the 1730s, was the world's principal supplier.

In the early 20th century, sovereigns would arrive on the doorsteps of famed Parisian jewelry houses laden with steamer trunks stuffed with gemstones. The elite jeweler Alain Boucheron recalled that, in 1927, "the flamboyant Maharajah of Patiala was accompanied by a retinue of 40 servants all wearing pink turbans, [toting] six caskets filled with diamonds, pearls, emeralds, sapphires and rubies of incomparable beauty" that were transformed into tiaras, aigrettes, belts and necklaces. Evidently, Patiala spread the wealth. In 1928, he awarded Cartier its largest commission at the time: an enormous, cascading multi-chain necklace comprised of more than 3,000 diamonds, a yellow 234.65-carat De Beers diamond, topazes and a chunk of citrine. The piece resides in a display case of its own, and is also seen in a photograph of the Maharaja. Several portraits of other rulers, and clips from grainy black & white films, depict the potentates in full regalia. Weighed down by multiple ropes of magnificent pearls, huge diamond pendants, including one that formerly belonged to Catherine the Great, brilliant blue sapphire brooches, necklaces of gold, rubies and emeralds, and turbans festooned with same, plus feathers, it's a wonder they could stand up or remain upright. Traders speculated the jewels of the Mughals were equal to the wealth of all the European monarchs combined.

Visitors are greeted by a spectacular ruby bib necklace of glittering platinum, rubies and diamonds by Cartier London, made expressly for the Maharaja of Nawanagar in the late 1930s. After Indian independence in 1947, it was sent back to Cartier and refashioned for Gloria Guinness, who wore it to Truman Capote's Black and White Ball in New York in 1966. No baubles show would be complete without socialites such as Daisy Fellowes, heiress to the Singer sewing machine fortune and daring fashion trendsetter of the late 1920s and 30s. Once married to a French Duke, she was rumored to have tried and failed to seduce Winston Churchill before wedding his cousin. She may not have fared well in matters of the heart, but who cares when one owns, as she did, the pair of stunning Van Cleef & Arpels, High Art Deco-style, diamond-studded Manchette (cuff) bracelets with a fringe of tiny emeralds, modeled after Indian anklets. One of the chicest women of her day, Fellowes cuts a svelte figure in a black and white photograph that shows her sporting a stylish bob in a sleeveless, low-cut black dress, an ostrich feather wrap casually slung on her arms, and the bracelets prominently displayed on her wrists.

Taking its name from an apocryphal legend that it was stolen from the eye of a Hindu deity, the beautifully cut "Idol's Eye," the largest blue diamond in the world, comes in at 70.21 carats; just for perspective, the Hope Diamond, at 45 carats, is a comparative pipsqueak. The gem was once possessed by Imelda Marcos, who must have sold off some of her shoes, in addition to looting the Philippine treasury, to acquire it.

During the heyday of the Mughal Empire, the finest quality emeralds were imported from Colombia. Often carved to disguise their flaws, they were prized by emperors, who stored them in an immense treasury whose contents were sacked and spirited to Iran in 1739. Among the many divine examples that survived is a gargantuan, square-shaped piece that's a whopping 211 carats.

It would be remiss not to mention the plentitude of gold, accented with enamel and molded into royal accessories, flywhisks, crutches and opulent symbols of kingship such as tiger heads and parrots dripping emeralds from their beaks. One deprived soul is said to have complained that the elephants got all the best gold for their ceremonial processions. Being a pachyderm has its privileges.