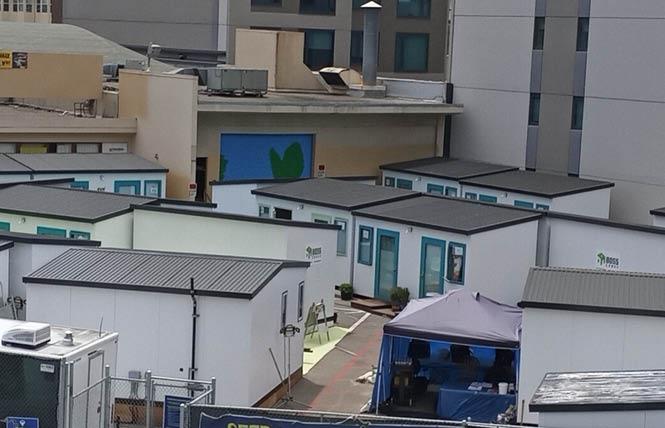 Small cabins like these at 33 Gough Street could be expanded under a proposed ordinance by San Francisco Supervisor Rafael Mandelman. Photo: Scott Wazlowski

A proposed ordinance by gay District 8 Supervisor Rafael Mandelman to enhance shelter solutions for people experiencing homelessness and sheltering on the city's streets hit an unexpected snag during a committee hearing May 12, and has left Mandelman trying to decide what to do next.

The proposed ordinance, titled "A Place for All," would make it the policy of San Francisco to offer all people experiencing homelessness in the city a safe place to sleep. The original proposal, introduced back in 2020, failed to make it out of the Board of Supervisors Budget and Finance Committee, which instead supported safe sleeping sites, or sanctioned outdoor camping spaces. This newer version includes a broader array of options while placing less emphasis, but not doing away with, congregate housing such as shelters.

Then-Supervisor Matt Haney, who was sworn in as the new assemblymember for the 17th District on May 3, had been one of the measure's initial opponents but signed on as a co-sponsor this time before his departure for Sacramento, along with Supervisors Catherine Stefani (District 2), Myrna Melgar (District 7), and Gordon Mar (District 4).

At a news conference before the supervisors' public safety and neighborhood services committee meeting, Mandelman accused the city of being oblivious to the needs of, not only the homeless, but housed residents as well.

"When I joined the Board of Supervisors back in 2018, I was struck by the disjunction between the conversations I would have about the homeless and encampments with my constituents and small businesses that I represent," he said, "with neighbors who were finding their sidewalks impassable and small businesses who were dealing with folks with serious substance use problems, who were coming into their stores and creating all manner of challenges. And the conversations here at City Hall which seemed completely oblivious to those realities in the daily lives of San Franciscans."

The new proposed ordinance would require the San Francisco Department of Homelessness and Supportive Housing to prepare a strategy for implementation within three months, including estimates for how many people might accept offered shelter, how much that would cost, and the total annual cost of the program once it was put into effect. Representatives from DHSH did not immediately return a request for comment.

The proposal also directs the director of real estate to identify locations throughout the city that might be appropriate for use as shelters — such as the small cabins in use at 33 Gough Street and safe sleeping sites — and then submit those findings along with DHSH's implementation plan.

As the ordinance was discussed by committee members Mar, Stefani, and District 1 Supervisor Connie Chan, who was subbing in a vacant seat on the committee, amendments were proposed, including one by Melgar that would include safe vehicle parking areas as shelter options. Another add-on she proposed, however, may have cost the ordinance the support of its own author. Melgar added an amendment that would include permanent supportive housing, which Mandelman feels would undermine the ordinance's emphasis on immediate shelter accessibility.

¨It's fair to say yesterday was not the outcome we hoped for, and we are considering a variety of options," Mandelman's legislative aide, Jackie Thornhill, stated in a reply to the Bay Area Reporter May 13. Mandelman left for a trip to Israel shortly after the hearing but is "still thinking through how to proceed," she added.

Supervisors heard comments from more than 35 members of the public, many of whom were affiliated with the Coalition on Homelessness, which opposes the legislation and prefers, as many testified, housing before shelter.

"The Coalition on Homelessness believes A Place for All is flawed," the agency said in a statement released later, ¨not just because it is unfunded and therefore falsely promises relief for unhoused San Franciscans, but because it singularly focuses on shelter, at the expense of housing solutions."

"This legislation must be changed to include a cost comparison of prevention and housing, as well as call for expansion of these interventions as needed," stated Jennifer Friedenbach, executive director of the Coalition on Homelessness. "Housing and keeping people housed not only solves homelessness, but it is key to freeing up shelter space. Shelters fill up unless two key components to ensure turnover are included: housing for people to move into, and efforts to prevent additional San Franciscans from becoming newly homeless. A Place for All legislation as written is in reality a hollow 'A Place for Nobody.'"

But plenty spoke in favor of the proposal as well, including representatives from Rescue SF, a coalition of residents "advocating for compassionate and effective solutions to homelessness," and Andrea Aiello, a lesbian who is executive director of the Castro/Upper Market Community Benefit District, who called upon the committee to support the legislation as written.

"I just want to say that this is a plan for shelter," said Aiello, speaking to the committee remotely by phone. "It is not a plan to solve all the city's problems around homelessness."

Merchants and residents of the Castro, like their neighbors in the Mission, the Tenderloin, and other districts, have been frustrated with the growing numbers of encampments, as well as the presence of people suffering from mental health issues, on the streets.

Mandelman found plenty of support from Castro business owners the first time he presented A Place for All back in 2020.

If the plan isn't enacted, Aiello said, thousands of people who want shelter could, instead, remain on the streets, "dying, being in ill health." The plan is about creating shelter, Aiello emphasized. "People should consider how much it costs the city to have thousands of people living on the sidewalks. This could save the city lots of money."

Eventually, committee members voted 2-1 in support of A Place for All, with ordinance co-sponsor Stefani in opposition to the proposed amendments. The ordinance will return to the committee for further consideration at its next biweekly meeting May 26.

Castro businesses demand help from SF after spate of vandalism
Sign up!