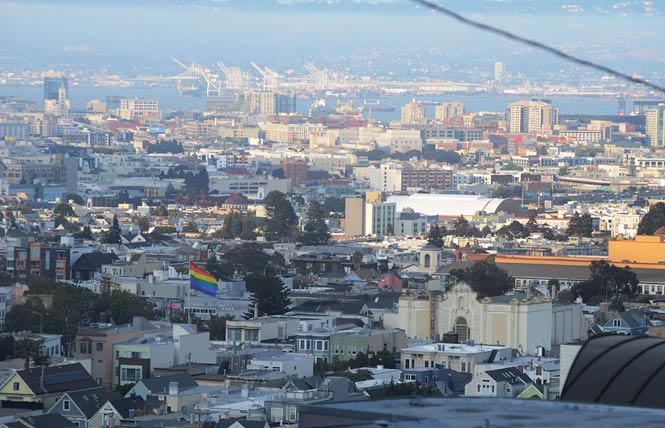 While various city departments received praise for the progress they have made over the last five years on collecting LGBTQ demographic data, San Francisco's health department came under pointed criticism at a supervisors hearing Thursday for its continued problems in gathering the sexual orientation and gender identity of the patients it serves.

As the Bay Area Reporter previously reported in April, in a story about the departments' fiscal year 2019-2020 reports on their SOGI data collection efforts, the Department of Public Health submitted a six-page update with very little usable LGBTQ demographic information. It cited its switching to a new electronic records-keeping system called Epic during the 2018-2019 fiscal year and having to pivot its focus to addressing the COVID-19 pandemic as for why it has been hampered in better collecting the SOGI data.

Its report for fiscal year 2020-2021 was even fewer pages, at four total, and once again pointed to its continued focus on COVID and use of the new electronic health care record system for why it continues to be a laggard in reporting out SOGI data compared to the five other city departments that have been required to collect the information since 2016.

Gay District 8 Supervisor Rafael Mandelman, who had called for the October 21 hearing on the city departments' SOGI data collection efforts before the supervisors' Government Audit and Oversight Committee, faulted the health department for its continued inability to present detailed LGBTQ demographic information.

"DPH is a little bit of the problem child today," said Mandelman, the lone LGBTQ community member on the Board of Supervisors. "I do hope the department can do better going forward."

Mandelman said he recognizes "everything at DPH has been dramatically impacted by COVID and DPH has done an extraordinary job of pursuing that as a top priority in the city. But it does seem to me this report is not where I would like it to be, and I would assume not where DPH would like to be in terms of collecting this data."

Dr. Blake Gregory, the primary care director of population health and quality for DPH, admitted during her presentation that the health department's SOGI data collection "has plateaued" and that there are "a lot of opportunities for improvement." As for the root causes, she noted, "as we all know, the last two years have been very unusual and challenging for the DPH."

The second half of fiscal year 2019-2020 DPH was focused "on emergency response" to the health crisis, said Gregory, and "this whole past fiscal year was wholly consumed with pandemic response."

The ongoing COVID pandemic has led to understaffing issues, added Gregory, and the use of telehealth platforms resulted in some issues with collecting the SOGI data. DPH has focused on providing more feedback to staffers who are struggling with the collection of the SOGI data, she said, and has been advocating for more analytic support.

"We are doing a lot more staff training," she said, and "trying to beef up in-person visits."

Her own area within DPH, primary care, is having issues with its SOGI data collection, Gregory acknowledged, though it did see an increase between the two fiscal years. In 2019-2020 its SOGI data completion was below 40%, while last year it edged up to roughly 50%.

"The area I work in, primary care, is lagging behind some other departments," said Gregory, who noted that prior to the switch to the Epic record-keeping system, it had a SOGI data collection rate of 60%.

The health department's Laguna Honda Hospital had the highest rate of SOGI data completion, at or near 90% in both of the fiscal years. Yet it appears to be underserving the city's LGBTQ community, estimated to be around 12% of the total population, with just 6.4% of its patients and clients identifying as either gay, lesbian, or bisexual and 0.9% either transgender or gender-nonconforming.

"If that data is correct, Laguna Honda is dramatically underserving queer people," said Mandelman. "All of this is concerning to me where DPH is in terms of SOGI data. I hope and expect DPH is in a better place next year; we are fully five years into this legislation being fully enacted."

"We are not doing enough as it currently is," said Chan, who also raised concerns about if DPH was asking the SOGI questions only in English or in multiple languages so it was capturing LGBTQ demographics among the city's various ethnic and racial groups. Many people of color are not English speakers, Chan noted.

"Are the data being collected solely in English or other languages being used to collect this data so it is precise and also wider range, capturing a larger population that we may not otherwise capture if the data is only collected in English?" she asked.

Gregory pledged to follow up with an answer for her, noting "language is a huge value and priority for us."

Pau Crego, the acting director of the Mayor's Office of Transgender Initiatives, noted that their office has worked over the years to assist the various city departments in improving their SOGI data efforts and training their staff on how to ask the questions. Crego said one issue the office is trying to address is ensuring how the questions are phrased remain up-to-date for how LGBTQ people define their sexual orientation and gender identity.

The data has already been used, noted Crego, "to identify and address gaps in the city" when it comes to services for the LGBTQ community.

But Crego admitted there have "also been some challenges; I am not going to lie. Our ability to make meaning of the SOGI data has been really complicated. The departments have multiple data systems."

And the SOGI data that is collected is decentralized, Crego pointed out.

"It has been a long road in terms of getting this data to the quality we need to help guide our services. We are really proud of where we have come and we have more work to do," Emily Cohen, deputy director for communications and legislative affairs for the homelessness department, said at Thursday's hearing.

She noted that of all households the city agency assists, it has "consistently served" roughly 14% to 15% LGBTQ households each year. And the total number of LGBTQ households it provides services to has increased by approximately 800 within the last three years, though it continues to see households led by transgender men be underserved.

It is working to address that service gap, as well as increase the overall number of transgender and gender-nonconforming people accessing its various programs.

"We are aiming for 12% to 27% of our services to be going to LGBTQ households," said Cohen.

Each fiscal year the departments are required to file reports detailing their SOGI data efforts and the information they have been able to collect. Since being elected to the board in 2018, Mandelman noted there have now been three hearings before the supervisors about the various departments' SOGI data collection efforts.

For the most part, he observed, all have made progress during that time with some doing markedly better in gathering LGBTQ demographic information and using the data to better target services to, or increase resources for, the LGBTQ community.

To assist all city departments in improving their SOGI data collection, Mandelman once again called for a working group comprised of city staffers and LGBTQ community members focused on gathering the LGBTQ demographic information. District 5 Supervisor Dean Preston, chair of the GAO committee, pledged his support for convening such an oversight body.

"This is an extremely important topic," noted Preston at the start of the hearing.

To download the six departmental SOGI data reports for fiscal year 2020-2021, as well as their presentation materials for the October 21 hearing, click here.