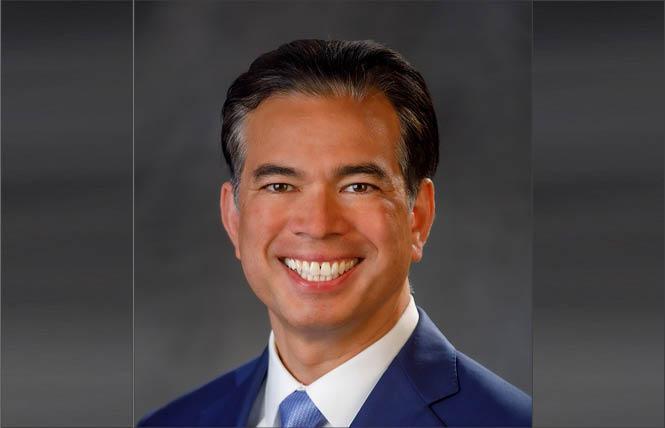 California Attorney General Rob Bonta has signed on to an amicus brief supporting trans students in a case out of Connecticut. Photo: Courtesy AG's Office

California Attorney General Rob Bonta joined the attorneys general of 19 states and the District of Columbia in filing an amicus brief in a case out of Connecticut supporting the freedom of transgender student athletes to participate in sports in line with their gender identity.

"All of our student athletes deserve a chance to be themselves and participate in the full school experience," Bonta stated in a news release. "But this case threatens to rip that chance away from kids across the country just because of who they are. It's part of a nationwide attack on the rights of our LGBTQ+ communities. It's unacceptable and that's why we're fighting back. Transgender student athletes — like all of our kids — shouldn't have to worry about being targeted in school. Our message is simple: Let them play."

The case Bonta's referring to is Soule v. Connecticut Association of Schools, which is being heard by the 2nd U.S. Circuit Court of Appeal.

In the case, Selina Soule joined several other cisgender female student athletes in arguing that a policy adopted by the Connecticut Interscholastic Athletic Conference violates her constitutional rights. The policy at issue is that transgender student athletes are free to play gender-segregated sports in line with their gender identity, and are not forced to play based on their sex assigned at birth.

Soule and the co-plaintiffs argue this violates Title IX of the Education Amendments of 1972.

"This discriminatory policy is now regularly resulting in [trans females] displacing [cisgender] girls in competitive track events in Connecticut — excluding specific and identifiable girls including plaintiffs from honors, opportunities to compete at higher levels, and public recognition critical to college recruiting and scholarship opportunities that should go to those outstanding female athletes," the plaintiffs' initial complaint alleges. "This reality is discrimination against [cisgender] girls that directly violates the requirements of Title IX."

Robert N. Chatigny, a judge with the U.S. District Court for the District of Connecticut, dismissed the suit in April.

"In its 2016 Guidance, [the federal Office of Civil Rights] stated that requiring schools to permit transgender students to participate in sex-segregated activities consistent with their gender identity comported with judicial decisions under Title IX," Chatigny stated. "That statement remains accurate. Courts across the country have consistently held that Title IX requires schools to treat transgender students consistent with their gender identity."

Chatigny also ruled that the graduation of the trans athletes "whose participation in girls' track provided the impetus for this action" rendered the suit moot.

The plaintiffs appealed, and have filed an opening brief with the 2nd circuit.

Before Chatigny made his ruling, the Trump administration filed a "statement of interest" siding with the plaintiffs. This was subsequently withdrawn by the U.S. Department of Justice after President Joe Biden's inauguration.

In the amicus curiae, or "friend of the court," brief, the attorneys general argue that the plaintiff's "argument has no basis in the statutory text, and if accepted, would undermine the amici states' efforts to create inclusive school communities."

"Amici states strongly support the right of transgender people to live with dignity, be free from discrimination, and have equal access to education, government-sponsored opportunities, and other incidents of life, including student athletic programs," the brief states. "Discrimination and exclusion on the basis of transgender status cause tangible economic, educational, emotional, and health harms."

"Unfortunately, transgender individuals often experience severe discrimination that limits their ability to realize their potential," the brief states. "Today, at least 22 states and the District of Columbia, and at least 330 local governments, offer express protections against discrimination based on gender identity in areas such as education, housing, public accommodations, and employment.

"Discrimination against transgender youth can have serious health and academic consequences," the brief continues. "LGBTQ students who experienced discriminatory policies or practices in school were found to have lower self-esteem and higher levels of depression than students who had not encountered such discrimination."

The attorneys general stated that trans participation does not deprive cisgender students of their rights under Title IX.

"As the experiences of amici states show, allowing transgender girls to participate on sports teams aligned with their gender identity does not substantially displace athletic opportunities for cisgender girls," the brief states. "Interscholastic sports organizations, local school districts, and individual colleges and universities in the amici States have adopted policies to ensure that transgender students will have equal access to sports participation — and these policies have not resulted in fewer opportunities for cisgender students. ... amici states are not aware of evidence that transgender athletes have dominated any sport or competition, or have caused scholarship opportunities to be unfairly denied to cisgender competitors."

"Attacks on transgender students are a violation of their rights and simply will not be tolerated," James stated. "When we adopt inclusive policies that honor every individual's rights with dignity, we create a fairer, more just, and more prosperous society for all. The law does not discriminate based on gender, sexual orientation, or gender identity, and I will do everything in my power to fight for equal protection under the law for every community."

As the Bay Area Reporter reported in August, Bonta joined the attorneys general of 14 states and the District of Columbia in filing an amicus curiae brief supporting three trans Alabamans who've been denied driver's licenses that correspond to their gender identity.