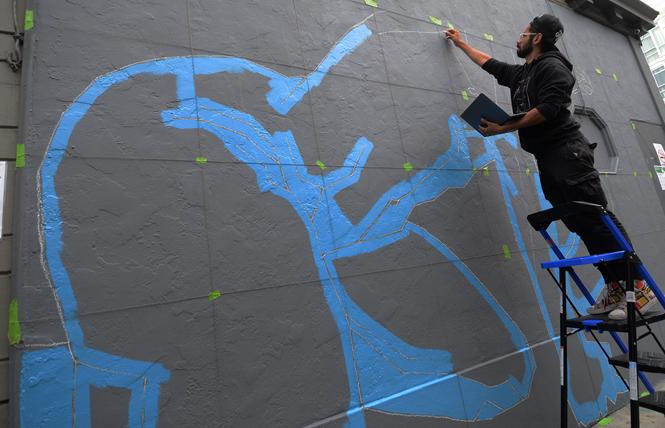 A new mural on the side of the Powerhouse bar in the city's South of Market neighborhood is showcasing how queer people expressed their sexuality as they physically distanced.

The mural, which will be completed August 27, is being painted by Simón Malvaez, a queer artist who Bay Area Reporter readers may remember worked with Juan Manuel Carmona earlier this year on the "Queeroes" mural on the side of the San Francisco LGBT Community Center.

"It's a guy on his knees taking a selfie while he's naked," Malvaez told the B.A.R. August 23 as he got underway on the new project at the intersection of Folsom Street and Dore Alley. "I use the selfie as a symbol of empowerment because during quarantine a lot of people had time — especially in the queer community — to share sexuality through the internet."

The model is "an anonymous guy," Malvaez said.

The mural is being commissioned by Sniffies, a cruising app for gay, bisexual, and bicurious men.

Sam Stone, a gay man who is based in New York, is the editorial director for Sniffies, which he said was founded in Seattle about three years ago.

"Sniffies is popular across the U.S., certainly in San Francisco as well," Stone told the B.A.R. "We started our talks with Powerhouse a couple of months ago. As we were speaking with [Powerhouse general manager] Scott [Richard Peterson] about how to bring Sniffies to San Francisco, we thought of ways we can add to the community and so we wanted to commission an artist — a queer artist — for the mural who can speak to the spirit of San Francisco as well as to Sniffies."

Stone said they found that artist in Malvaez.

"I personally have been a fan of Simón Malvaez for quite some time," Stone said. "His work is incredibly powerful, queer, and I knew he was based in San Francisco, so he came to mind first."

"I said yes, the artist's work is great," he stated. "The concept behind it is relevant with customers today. Photo opportunities that bring people to our corner make sense. We started a few years ago with 'Loads of Love' by Elliot C. Nathan, a collaboration with Juanita MORE!, so why not keep it going down the alley/pig pen side of our building."

Malvaez noted that the other artworks at Powerhouse were by white artists, such as the Honeybear in the attire of a Sister of Perpetual Indulgence by fnnch that is above the mural he's working on.

The "Queeroes" mural at the center replaced a fnnch mural on that site after fnnch, a straight man, was criticized over describing himself as an "immigrant" to San Francisco since he hails from the state of Missouri. (He later apologized.) Center officials distanced themselves from fnnch and explained that his Honeybears were only supposed to be up for a year, after which they said they would engage queer community artists.

"It's empowering for me to be a Brown artist and make art for both the Latino community and the queer community," Malvaez said.

Stone said that during happy hour August 27 there will be a celebration at the storied leather bar for the new art piece. Whether it starts at 5 or 6 p.m. has not been decided as of press time.

"We have some things we are putting together in advance of the debut of the mural," Stone said, referring to Sniffies' September "residency" at Powerhouse, helping to produce events featuring giveaways and performances throughout the month, leading up to Megahood 2021, the name of the event taking place September 26 in lieu of the Folsom Street Fair.

Stone and Malvaez declined to state the amount of the latter's stipend.