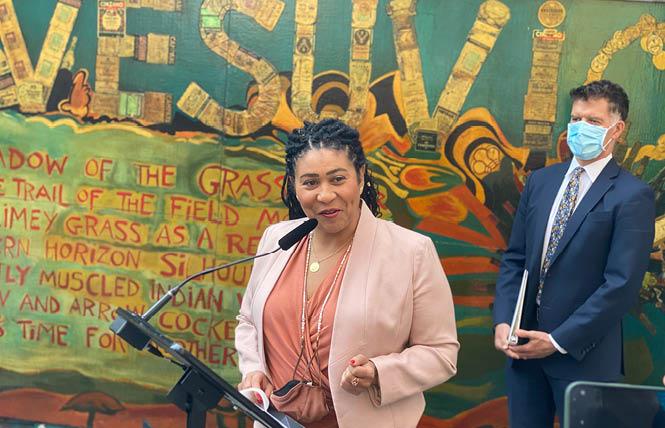 San Francisco became the first major city in the country to require people to be fully vaccinated against COVID-19 at many indoor spaces and large events, Mayor London Breed announced August 12.

Beginning August 20, people will need to show proof of full vaccination for entry into certain indoor businesses — including bars and restaurants — and all large indoor events in an effort to curb the surge of the highly contagious Delta variant.

San Francisco joins New York City and Los Angeles in announcing vaccine mandates for certain indoor activities. The Los Angeles City Council voted unanimously Wednesday to require at least one vaccine dose for the same kinds of businesses as in San Francisco, plus some retail. New York City's mandate, announced August 3 and going into effect Monday, requires proof of at least one dose.

Gay District 8 Supervisor Rafael Mandelman stated to the Bay Area Reporter August 13 that now people will know the city has one unified policy.

"I think it makes sense and I hope it will provide clarity for businesses and patrons alike," Mandelman wrote. "I applaud the Bar Alliance members and others who were already requiring proof of vaccination. A standard city mandate should make the requirement easier to enforce and move San Francisco closer to the end of the pandemic."

On Tuesday, the San Francisco Unified School District said it would require all of its approximately 10,000 employees to be fully vaccinated as of September 7. The district, preparing to welcome back students next week, will mandate any employee not yet vaccinated to test for COVID at least weekly.

"As we move to a full return to in-person learning on August 16, we are doing so with all of the current health and safety requirements in place," stated Superintendent Vincent Matthews. "Given that we are in the midst of rising cases and new variants in our community, a vaccine requirement is a necessary step to keeping our students, staff and families safe."

The decision by Breed and city health officials Thursday came just after the City College of San Francisco Board of Trustees voted to require all students, employees and visitors to be vaccinated.

Tom Temprano, a gay man who is vice president of the board, said it is "just common sense."

"We have a public health obligation to ensure the health and safety of our students and employees and a public policy obligation to do everything in our power to get people vaccinated and end this pandemic," he said.

As the B.A.R. previously reported, hundreds of bars citywide instituted a proof of vaccination requirement on their own in late July, including many LGBTQ establishments.

In her remarks outside of the Vesuvio Cafe along Columbus Avenue in North Beach, Breed thanked those businesses for being proactive.

"We are following the lead of our small businesses, of bars, in our city," Breed said.

Showing a picture of one's vaccine card on their phone will be enough to comply with the policy, the mayor clarified.

"The goal is to make it as easy as possible for people," she said.

The businesses covered by the health order include "bars, restaurants, clubs, theaters and entertainment venues, as well as indoor gyms and other fitness establishments." It does not apply to people picking up to-go orders, or to those ineligible for the vaccine, such as those under 12.

It also applies to any indoor event of 1,000 people or more. Indoor being the key word, however, as it will not apply to San Francisco Giants games at Oracle Park, according to Dr. Grant Colfax, a gay man who is the city's director of health, citing low COVID transmission rates in outdoor spaces.

(Though as the B.A.R. reported this week, some fully vaccinated attendees of the outdoor Folsom Street Market last month and its associated events became infected with the virus that causes COVID. The outdoor transmissibility of the Delta variant is still being studied.)

Under the new order, there is an exception for events for which tickets were sold before August 12 and that occur before September 15, though attendees at those will have to show a recent negative test if they cannot show proof-of-vaccination, the order states.

By that date, all employees at health care facilities and other congregate settings such as homeless shelters and jails must be vaccinated. It was reported this week in the San Francisco Chronicle that nearly 200 city employees, mostly at the fire and sheriff's departments, have sent conspiracy-tinged letters to the Department of Human Resources trying to get out of complying with the vaccine mandate and protocols such as testing, and mask-wearing.

Workers at all indoor places where food and drink are served must be vaccinated by October 13, the order states.

"In this phase of the pandemic, we must optimize the powerful tool of vaccines to protect us as we fully reopen to business," Colfax said. "These past few weeks have demonstrated how important it is that everyone eligible is vaccinated as we resume normal activities."

Breed acknowledged that the past 17 months fighting the pandemic have been hard on everyone.

"When I asked you to shelter-in-place and change your entire lives to ensure you didn't spread ... you did your part," Breed said. "Ultimately, we saw the very best of the people of this city, and now we need just a little bit more."

"I knew less people at that time [of shelter-in-place] who got the virus," Breed said. "There are a bunch of folks I know now who have been vaccinated who contracted COVID."

Many of those who are now hospitalized in the city for COVID — some 107 people, the mayor said — are also younger than during previous surges. In fact, this surge led to the city's COVID case rate surpassing that of the nation at large for the first time since March 2020, according to the Chronicle (https://www.sfchronicle.com/health/article/Why-San-Francisco-s-COVID-case-rate-is-suddenly-16375326.php).

Still vaccines are very effective against the new variant. It is hoped that vaccine mandates will lead to needed conversations, rather than to mass firings, Breed stressed.

New data reported by Axios August 11 showed the Moderna vaccine is 76% effective against infection with the COVID-19 virus by July (when the Delta variant became the most prominent), compared to 42% with the Pfizer vaccine. Overall data from January through July showed the Moderna vaccine to be 92% effective against hospitalization, and Pfizer 85% effective. (The Johnson & Johnson vaccine was not part of the preprint study, conducted by the Mayo Clinic.)

"For most of us, it's been the worst year-and-a-half of our professional lives," Bleiman said. "Time and time again the mayor has shown she truly cares about our issues and will go to the mat for us."

Bleiman said that three to four weeks ago, many employees at member bars began to come down with COVID, "enough to give us pause."

This led to conversations among members about how to protect their own health, the health of those they live with, and the business implications of having to shut down while employees recover.

"The frustration was palpable," Bleiman said. "And we floated the idea of what if we just don't let them [the unvaccinated] inside."

Bleiman said that the response from the general public has been mum — calling it a "nothing burger" — and that infections among bar staff seem to have gone down.

(The city did institute a mask mandate at indoor spaces on August 3.)

Dave Karraker, a gay man who is a board member of the San Francisco Independent Fitness Studio Coalition and co-owner of MX3 Fitness in the Castro, stated that the requirement will help the city continue the process of reopening after the shelter-in-place orders of last year.

"We support the city's vaccine requirement for indoor fitness as it provides our clients with one more level of assurance that they can experience the mental and physical benefits of fitness in a safe, healthy environment," Karraker stated. "We feel anything that can be done to avoid the capacity limits or the full shut down of indoor fitness that we experienced last year is in everyone's best interest, particularly those small, neighborhood businesses that suffered so much since the start of the pandemic. We encourage the city to continue to explore other avenues to address this pandemic and support small businesses so we can continue our reopening efforts."

Of San Francisco residents age 12 and older, 78% are fully vaccinated and 85% received at least one dose, according to city data (https://sf.gov/data/covid-19-vaccinations).

A survey of LGBTQ adults nationwide from the Human Rights Campaign, released August 12, shows 92% of LGBTQ-identified adults have had at least one vaccine shot. (The percentage fully vaccinated was not reported.) Those survey results were based on data from some 15,042 participants.

Updated, 8/13/21: This article has been updated with comments from Supervisor Rafael Mandelman.