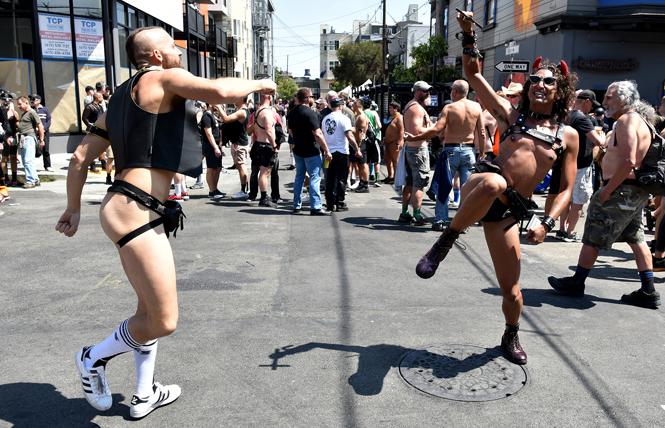 They were vaxxed and waxed — but not masked.

Thousands of people descended south of Market for the first LGBTQ street fair since the onset of the COVID-19 pandemic last year — Folsom Street Market Sunday, July 25 — and its associated parties and events, many of which were indoors. Many revelers didn't wear masks.

It wasn't until the following week, however, that the need to rein in "hot vax summer" sunk into the consciousness of partygoers due to the highly-contagious Delta variant of COVID, against which vaccines are very effective but less so than for the other variants of the disease.

"On Saturday night I attended a bar event while masked," Thornton, a gay man, wrote in an email. "That bar also had an outdoor area where I spent most of the time smoking a cigar outdoors. On Sunday I only attended outdoor events, which included Folsom [Street] Market and Sunday at the Eagle remaining on the patio wearing a leather mask. I did lower the mask to smoke cigars during both of those events.

"The very first real symptom I experienced was a migraine headache on Tuesday morning," Thornton, who is fully vaccinated, added. "That was followed by chills, coughing, body aches and cramps in my legs and arms. Loss of taste and appetite came a few days after."

Thornton tested positive for COVID two days later. Some friends of his he saw at Folsom Street Market and associated events also tested positive and he said "we are in constant contact to monitor and support one another."

The day of the Folsom Street Market, the seven-day rolling average of COVID cases in the city was 189. A week later it was 269 as people deduced via Facebook announcements of positive tests and in private discussions that Delta had been an uninvited guest at the party.

The city cannot say, however, how much of that can be associated with that weekend's events. And as the B.A.R. has extensively covered, there is no accurate data on the impact of COVID within the LGBTQ community due to myriad issues with the collection of sexual orientation and gender identity demographics.

Although the city's COVID case rate just surpassed that of the nation at large for the first time since March 2020, according to the San Francisco Chronicle, the city's contact tracing efforts are not as extensive as they used to be, a city spokesperson told the B.A.R.

"San Francisco is focusing contact tracing on our most vulnerable populations to assure they receive support services for safe isolation and quarantine," Noel Sanchez of the San Francisco Emergency Operations Center stated. "We are prioritizing efforts to support long term care facilities (both skilled nursing facilities and residential care facilities), in other congregate living facilities such as shelters, and in populations that are at risk for serious disease or where vaccination coverage may be low. We are no longer tracking the overall proportion of cases interviewed and contacts notified as this has not proven to reduce the risk of transmission of COVID-19 cases of the Delta variant."

Brian Johnson, a gay man who is fully vaccinated, was another partygoer who believes he was infected during the Folsom Street Market weekend.

"Wednesday after Dore Alley weekend I started having symptoms of a sore throat," Johnson wrote, referring to the rebranded market event. "It was smoky that day in SF and I am sensitive to it so I didn't put much concern into the symptom. The next day, Thursday, it had escalated into a dry cough."

Then on Friday morning Johnson's phone notified him he may have been exposed to COVID six days earlier.

"I picked up the Abbott/BinaxNow instant test at Walgreens that confirmed it," Johnson said, adding he took a more reliable test at a testing site later that day, which confirmed it the following Sunday.

Johnson lost his senses of taste and smell and said he was "thankful I didn't have to go to the hospital, now that I am recovered."

"I think requiring proof of vaccination ensures that everyone at the venue only has mild symptoms should anyone catch it like I did," Johnson said.

Folsom Street Events, the organizers of Megahood 2021 — which will be held this year in lieu of the Folsom Street Fair — will be requiring that attendees at the September 26 event to be masked because there will be more than 10,000 people, triggering the city's outdoor mask mandate, just as people have had to be masked in the city's indoor spaces since August 3.

The weekend between Folsom Street Market and the renewed mask mandate, many of the city's bars — including most of its LGBTQ establishments — began requiring patrons to show proof of vaccination.

Keeping an eye on Delta
Angel Adeyoha, the executive director of Folsom Street Events, which puts on the annual fetish street fairs, told the B.A.R. that the organization is keeping an eye on information about the Delta variant's potential for outdoor transmissibility as Megahood approaches.

"I'm watching like a hawk," said Adeyoha, who is queer and nonbinary.

Previous COVID variants did not spread nearly as efficiently outdoors as indoors. In fact, the fact that no COVID cases can be traced to casual outdoor interactions was one reason outdoor mask mandates were lifted before indoor ones. When the federal Centers for Disease Control and Prevention guidelines announced in May that "less than 10%" of COVID transmission was occurring outdoors, some virologists and epidemiologists said that was far too high a figure, according to the New York Times.

"We assume because Delta is more transmissible, that outdoors presents a risk," Adeyoha said.

"These precautions have been evolving but will definitely be re-evaluated — I'd like to say weekly but probably more often, just to be on target with where the city and county are when we get closer," Adeyoha said.

In addition to a mask requirement, precautions include more open space in the Megahood footprint "so that people have more room to be distant;" no large acts and only local acts on the five community stages; a 20-foot distance between people performing on stage and the rest of the crowd; and a map of local restaurants and bars people can patronize in lieu of a drink stand, though there may end up being a food court, Adeyoha explained.

"Those are our primary COVID mitigation efforts," Adeyoha said. "We are working with [the San Francisco Department of Public Health] to be present, give vaccinations, give COVID tests, and help connect people with resources. That was really successful at the July event."

Cal Callahan, a gay man who is the manager of the Leather and LGBTQ Cultural District, told the B.A.R. he is supportive of the mask rule.

"I completely support Folsom Street's methodology on this and sticking to masking for that big a crowd," Callahan said. "I think that's spot-on."

The Leather and LGBTQ Cultural District has adopted some safety protocols of its own for its monthly second Saturdays event, Callahan said.

"We talked at length all weekend and we are going ahead with it, because it's an outdoor event," Callahan said. "We will require masks of volunteers, vendors, and staff. Our understanding is that we can't legally insist on masks because it's a public street but we will be highly recommending them as people come in."

There will be no food and drink at the event itself, Callahan said.

Thornton told the B.A.R. that Folsom Street "did their part to protect attendees as best they could with the information they had at the time."

"I do believe they should re-evaluate the decision not to provide water or food," Thornton stated. "Attendees were forced to use the bars or local stores which made it impossible to avoid indoor crowds. Outdoor water and snack tents may help ease the burden of the local businesses. I'm not sure proof of vax is enough but it's a start. Maybe some sort of registration system requiring recent test results."

Adeyoha said that a proof-of-vaccination requirement for Megahood would be impossible.

"The city is not in favor of that since we are on a public street," Adeyoha said. "That would require a very different fencing requirement and our permit doesn't allow for it."

Thornton concluded that "I do believe there is a solution which will allow the street fairs to continue, provide outdoor refreshments free of charge and keep attendees safe."