Highlands Resort to LGBTQs: 'Keep your pants on' 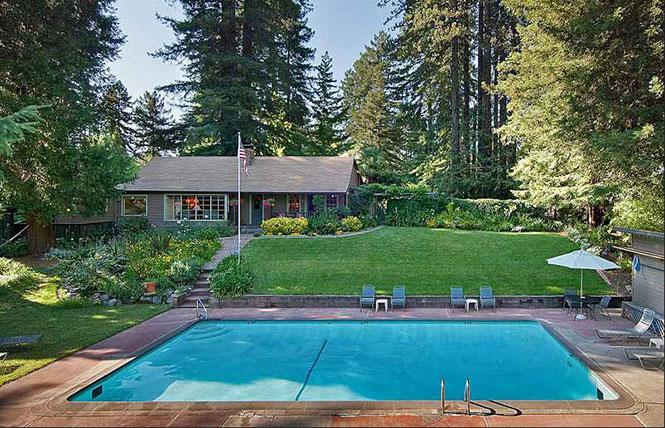 The Highlands Resort in Guerneville has new owners and has rescinded its clothing optional pool policy. Photo: Courtesy CABeaches

Not everyone is happy with the changes that have come to the Highlands Resort in Guerneville — perhaps the most visible of which is the new requirement that the pool area is no longer clothing optional.

"So keep your pants on ... it's going to be a fun new adventure," part of the resort's online "About Us" section reads on its website. "(No really, keep your pants on. In an effort to be more inclusive, we are no longer clothing optional.) We are, however, very excited to see your new bathing suits. We can't wait to see you!"

The resort changed hands in June after having been run by Lynette and Ken McLean for 26 years.

New co-owner Crista Luedtke, a lesbian who has been a longtime Russian River entrepreneur, told the Bay Area Reporter that the change went into effect June 1 for insurance reasons. Luedtke owns boon eat + drink on Main Street, boon hotel + spa on Armstrong Woods Road, is a partner in El Barrio Bar, also on Main Street, and was a co-founder of Big Bottom Market on Main Street, though she is no longer affiliated with that business.

Keeping the resort clothing optional would have "made the insurance policy much more expensive," Luedtke said. "Several declined to bid as a result."

Luedtke said that the new owners had inquired with "probably four or five" insurance companies. When asked by how much the rates would have gone up, she said that she did not know, but referred the B.A.R. to her business partner, Christian Strobel, a longtime hotelier and the founder of Basecamp Hotels, who she said handled the issue.

Strobel stated in an email to the B.A.R. that four companies refused a bid.

"Insurance companies initially refused to bid on our project citing the clothing optional element as a reason to insure as it raises the risk of 'improper sexual conduct and sexual harassment,' a liability for any business," Strobel stated. "Not sure I necessarily agree, but I am not an underwriter."

"The clothing optional element would have required us to put staff in potentially awkward situations with guests which is something we wanted to avoid in this tough staffing environment where it is hard to recruit and retain staff," Strobel stated. "We got feedback from a number of guests who felt uncomfortable using the pool given the nudity. Some loved it while others felt excluded by the fact they were uncomfortable being nude with strangers. We believe that by having a clothing policy at the pool it makes our pool more inclusive to all guests and not just those looking to be nude."

Nonetheless, Luedtke said that the pool area will be clothing optional on Lazy Bear weekend (July 26-August 2) this year, "to honor the Lazy Bear tradition."

Dwayne Riley, a 65-year-old gay man from Santa Rosa, said that he and his husband had been staying at the Highlands since before the McLeans had owned it.

"They did a good job taking care of it and treating the gay community with respect," Riley said.

Riley said that he participated in a last hurrah the Saturday of Memorial Day weekend, just before the resort changed hands.

"We didn't know the degree of the changes, which made it more sad," Riley said.

Riley characterized the new policy as part of a "whitewashing" of the resort and "a betrayal of me and the gay community."

Luedtke said that another reason for the change is "to create a more inclusive atmosphere."

But inclusivity means different things to different people. Nick Korkos, 33, a gay man from San Francisco, told the B.A.R. that the changes are "disappointing and disheartening."

"I feel our community has so few refuges, and what the Highlands created was a place that was inclusive regardless of who you loved or how old you were or how much money you made," Korkos said. "This new thing of being clothed to be more inclusive is a way of sanitizing people."

Korkos' foremost concern, however, was the increase in room rates, which the professional dancer said priced him out of being able to stay at the Highlands. He'd previously been able to rent one of two rooms that was $110 per night; but these are not available for rent anymore, he said.

Luedtke said that these rooms are now $159 per night, and confirmed that other changes to the resort include the end of day-use passes at the pool and the end of the ability to bring your own tent to the camping grounds.

"Sleep under the stars in our fully outfitted, canvas scout tents," the website reads. "Make your camping trip fun and easy, just pack a bag, your swimsuit, and show up ... we have the rest covered."

Luedtke said that people can still bring a guest to the pool but the end of the day-use passes was again due to additional insurance liability.

"It makes it better for our guests that they have access to the pool," Luedtke said. "We want to keep it for guests on the property."

"They listed on their website that they are inclusive but they got rid of day-use, clothing-optional, and camping," Riley said. "That's all part of the gay community. They did not reach out to their gay base at all to say 'don't go away.'"

Sean Maley, a 57-year-old gay man who lives in Guerneville, said he and his husband recently went to the Highlands for the first time. Luedtke is a friend.

"We've had a home up here for 35 years and we knew of the Highlands, and that it was clothing optional, but never went there because clothing optional is not our scene," Maley said. "I went up to the property for the first time and I had no idea how beautiful it is."

Maley said that the new policy will probably result in more people coming to the resort.

"It makes the town more fun to come to," Maley said. "They'll get more people to go there."

But Kronos said that he finds the Highlands is "morphing into a clothed, straight world with children."

Luedtke emphasized that "we very much still are a very gay resort."

"Every one of the staff here today [July 2] is queer," Luedtke said, adding that "quite frankly, regulars — a lot of gay men — are very happy about the change" regarding the clothing policy.

One of those is Chris (who declined his last name be used), a queer man who said that he has been to the Highlands annually every summer since 2012.

"If you go to all the pools in Guerneville, it is by far the most beautiful," he said. "It was clothing optional, but often you never noticed. The only times it was ever off-the-hook was Lazy Bear [weekend] or if someone brought a private party."

Chris said he likes Luedtke's leadership and that he does not have strong feelings on the policy in itself. He characterized opposition to the change in policy as "drama."

"To be real with you, I don't think we should make drama out of something that's not drama," he said.

Stephen Torres, a gay man who is a member of the Castro LGBTQ Cultural District Board of Directors, put the issue in the context of a changing society where many visibly, but by no means exclusively, queer fixtures (like clothing-optional resorts) are disappearing.

"When you acquire a property with that kind of history, it makes sense to be mindful of the history that comes with that," Torres, who's been to the Highlands in the past, said. "Clothing-optional resorts are disappearing, so it's unfortunate another is falling away.

"I think that was one of the nice parts about the Highlands," he added.

In a follow-up call, Luedtke said that "obviously, we knew change wouldn't land with everyone" but it was "hurtful" that the B.A.R. was reporting a piece highlighting the concerns of those who were upset about the change.

"What's interesting is the people are so angry about the change — the property was for sale, off and on, for 10 years," she said. "I have to, as a business owner, think about a sustainable model.

"I'm going to keep doing what I do," Luedtke added.

Updated, 7/7/21: This article has been updated with comments from business partner Christian Strobel.