A Dog's Tale: Dan Perdios' charming story of a disabled gay man and his service dog 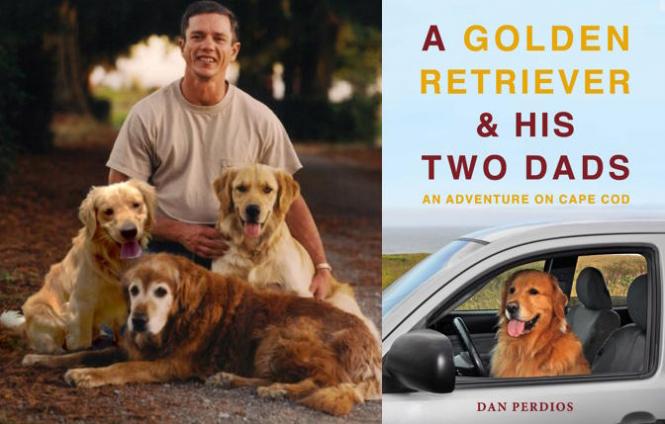 Author Dan Perdios with three of his Golden Retriever dogs

In his new book, A Golden Retriever and His Two Dads, author Dan Perdios, a gay man with limited hearing, remembers his late service dog Willy. For many years Perdios and Willy were inseparable, each depending on the other. Then one day Perdios meets James, a film producer, and the two tried to make a go of having a relationship.

The men were actually introduced to each other by Willy, but there was one problem: James wasn't a dog person and didn't seem to want Willy around. For Perdios this could have been a deal-breaker. But then James became involved in an independent film to be shot on Cape Cod over a period of six weeks. Perdios and Willy accompanied him on this trip.

In a short, sweet tale (the book is a scant 75 pages), Perdios recounts their journey. Perdios works on the film as an assistant, and the three of them build a bond, gradually becoming a family.
The bond between Perdios and Willy runs deep. Perdios has lived with AIDS for many years, and in fact lost his hearing as a result of the disease.

"Willy is all about living," Perdios said in an interview. "At the time I adopted him, he represented a new lease on life. Starting over. With the advent of new treatments, instead of planning for death from AIDS, I had to plan my life."

Perdios indeed owes his life to Willy. One day the smoke detectors in Perdios' house went off, but he couldn't hear them. It was Willy who alerted Perdios to the fact that a frying pan in his kitchen was on fire.

"I had forgotten that I was cooking something," Perdios said. "He saved my house and my life."
The adventure on Cape Cod is vividly written and comes to life in Perdios' deftly written pose. The author recalls the six-week film shoot, during which time everyone on set falls in love with Willy.

Willy eats up the attention. There's also a meeting with Perdios' parents, who live near the film set.
Perdios has always had a troubled relationship with his parents due to his being gay. But much to his surprise, mom and dad not only accept James, they seem to like him.

A weekend off from filming gives Perdios, James and Willy time to go exploring around the vacation city of Provincetown. They have a wonderful time, sampling the area's many seafood restaurants and romping on the beach.

"This non-fiction novella allowed me to explore all the adventures of that time period, the early days of my relationship with my husband James and Willy," Perdios said. "Without being restricted about the subject matter that I really love, Cape Cod. This format also allowed me to include more scenes about the filmmaking, which for me was fascinating having never done anything like that before. And it turns out many readers agree." 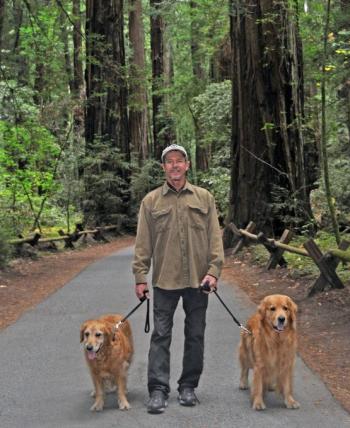 On Golden paws
Perdios' had another reason for writing the book.

"When Covid began, I decided to write something that was uplifting and entertaining," he said.
Perdios succeeds in this goal. After the making of the film is completed, he, James and Willy stay on in Cape Cod for a honeymoon. This section of the book is short and sweet and serves as a delightful remembrance of Willy. The book becomes a true love story, an easy read in which Perdios exposes his feelings, his challenges, and his simple joy at finding a husband who comes to love Willy as much as he does.

The book concludes with a sample chapter from Rescued by Goldens, Perdios' next book. In that book he'll be chronicling his memories of all three of the golden retrievers he's had in his life. In the sample chapter, "Rescuing Morgan," Perdios and James meet Morgan, the dog who followed Willy. Morgan is a bit of a challenge at first, but with a little patience and understanding, he mellows and becomes a cherished member of the family.

Perdios acknowledges that his core audience is women, the LGBTQ community, and dog lovers. On his 'Rescued by Goldens' Facebook page he shares details about his life with Morgan and his other dogs, his life as a gay man living with health issues, his time as an AIDS activist, and his relationship with James.

"The feedback that I'm getting from many readers is that they found the book very intimate and honest," he said. "It affected them. One reader said she cried when she read it. Everyone seems captivated by different sections, whether it's my health issue or making a movie."

Though there might be some who find the book's title a bit eye-opening.

"It's hard to believe that in 2021 that a title like A Golden Retriever and His Two Dads can still be considered provocative," Perdios said. "I guess I'm glad to still be pushing boundaries."

The book is available in paperback and Kindle editions.

Holidays go to the dogs 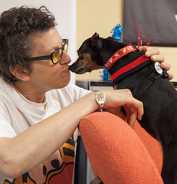