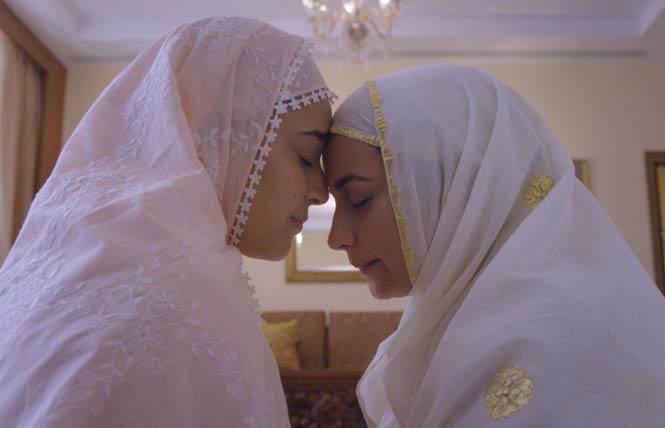 "I think the film itself is pathbreaking in many ways," said Ansari, 31, who wrote and directed the short film. "I don't think a film in this capacity has ever been made in India."

The film is a 30-minute love story about two queer Muslim women and the love between a mother and daughter; 95% of it was produced and created by women. Swara Bhaskar plays one of the women, Sitara, and Divya Dutta plays Saira, Sitara's girlfriend.

A trans actor, Shivali Chettri was cast in the film, but her scenes were cut from the version shown by Frameline and other festivals.

"I think for the first time in India that a role of cisgender woman is being played by trans actor," Ansari said.

The Bay Area Reporter interviewed Ansari, who is best-known for their 2017 award-winning gay silent movie, "Sisak," in Mumbai in January 2020. At the time, Ansari was putting the final touches on "Sheer Qorma" in preparation for its then-March 2020 release, before the global COVID-19 pandemic hit. The film's release was held for more than a year. It premieres at the Frameline Film Festival this weekend.

"'Sheer Qorma,' is about the least represented group of community in the world right now," said Ansari. "Nobody ever made a film about queer Muslim women, so the minute they see them in a hijab, they get uncomfortable."

Ansari said they received death threats when the first poster for the film was released.

"The minute that you bring sexuality and faith into the same sentence people get uncomfortable," Ansari said, but they are not backing down.

Fighting hate with love and cinema
Ansari, a Muslim, believes the queer Muslim community not only needs more representation, but the "right representation." Islamophobia was growing fiercer throughout India following the passage of the Citizenship Amendment Act 2019, known as CAA, which was accompanied by the National Registration of Citizens Act, known as NRC. The laws, along with the Transgender Act, passed around the same time, created a trifecta that some LGBTQ Indians told the B.A.R. negatively impacted India's transgender community, further marginalizing the community prior to the global pandemic.

Angered by the laws, India's minority communities protested en masse throughout the country at the beginning of 2020. Some demonstrators were killed by Indian police at the time.

"Just because you're Muslim, your citizenship is at stake right now," said Ansari, who graduated from Pennsylvania State University. "What kind of government does that? We know it all happened in Germany."

The way Islam and Muslim people are portrayed in the media, especially the West, "is nothing like my family," Ansari said, stating that they were raised believing Islam was a "religion of peace, a religion of love."

Muslim stories need to be told in the face of the rise of Islamophobia in the world, in India, and within India's LGBTQ community, Ansari said. "In India, within the queer community, there is a great amount of Islamophobia," they said.

Ansari feels through film they can effect change and grow a movement of love.

"In this film I'm trying to explore a different aspect of love ... it goes to a new dimension which is called intimacy, which people are so scared of," Ansari said.

They realized the potential for this power during a screening of "Sisak" in Bangalore. Ansari said they watched young siblings in the audience, a brother and sister, who held hands and cried throughout the movie.

Later in the evening, Ansari received an Instagram message from the sister. "After watching your film, my brother went back home, and he came out to our parents," Ansari recalled the message said. "After all these years, he is sleeping peacefully in the room next to me while I'm typing this message to you because you had the courage to make this film."

"So, if used rightly, [moviemaking] could be a massive movement of acceptance and love," Ansari said. "That's when I think I realized that I have a responsibility which transcends art."

Ansari believes "Sheer Qorma" comes at the right time. "I feel like the world needs a giant hug given where we are and what's going on," they said.

Making 'Sheer Qorma'
Ansari's vision for the film grew out of an evening spent hanging out with a group of Harvard lesbians following a screening of "Sisak" several years ago. An unidentified nonbinary member of a lesbian group challenged Ansari about their decision to create a film about two gay men instead of two queer women during the film's discussion period, they said.

Ansari agreed with the questioner, as a storyteller, "you should always aim to broaden your horizons" they said.

"I realized that queer women are one of the most marginalized [and] less represented communities in world cinema, especially a queer woman of color," Ansari added, noting queer Muslim women of color are even "less represented."

Soon after, Ansari spent two years working extensively within India's transgender community. The work led to another awakening to their privilege as a cis-male bodied individual.

"That really made me question my privilege," said Ansari, who formerly identified as gay, but came out as nonbinary during the process. "I realize there's a great deal of privilege that is attached to your gender, especially when you're a man."

Their experience, along with being influenced by Hollywood's shakeup with the #MeToo, #Timesup, and #OscarsSoWhite movements, led them to take up the diversity and storytelling challenge.

"When I had an opportunity in my film, I said, 'Be the person who does that,'" Ansari said. They decided to hire an all-women team and cast a transgender woman as one of the partners in the Muslim lesbian couple.

"A trans woman playing cisgender woman, which is a first ... that's how you open up conversations. That's how you push inclusion," said Ansari.

However, there was no female trans Muslim Indian actor. Ansari hosted three acting workshops in the transgender community to find Chettri, who could correctly portray a Maharashtrian Muslim woman, who are from the small Parsi community that migrated from Persia, now modern-day Iran, to India centuries ago.

"The person has to look a certain way [and] speak with a certain dialect," Ansari said, adding it was "very difficult for me to find an actor who fits that bill who is also trans."

Anjali Rimi, co-founder and president of Parivar Bay Area, is happy that the organization is a community partner with the screening.

"The fact [is] that a whole lot of us still very much [exist] on the fringes ... right within our community," said Rimi, 41, a pansexual woman of trans experience. "A lot of dialogue needs to happen and what a better way to portray it in a creative way that Faraz has actually brought this movie together for us."

She hopes the screening will bring awareness to India's gender trans-hijra community.

Rimi hopes that the partnership will not only raise awareness about the marginalization of India's diverse gender-nonconforming community, but it will also aid in Parivar Bay Area's COVID relief efforts to India's trans-hijra community. India's trans community has suffered in relative silence throughout the global pandemic, Rimi said.

"The trans-hijra communities of India were not spared," Rimi said of the pandemic. "They have been further marginalized."

The community has received little-to-no outside support from organizations or Indian celebrities in Bollywood and Hollywood to call attention to their needs, said Rimi, who would like these communities to join their COVID relief and recovery efforts. Indian trans-hijra communities have banned together to create its own COVID-relief and recovery efforts.

Through its efforts and network, Parivar Bay Area has been able to help transgender Indians back home through its Save Indian Trans ALLINDIA Lives, or SITAL, initiative. Rimi hopes that the Frameline partnership will draw attention to India's trans-hijra community and it will help Parivar Bay Area reach phase one of its $400,000 fundraising goal by bringing in $175,826 to provide COVID relief to India's trans-hijra communities.

"We need to raise about $400,000 to support all of these folks," said Rimi, who moved to the U.S. 20 years ago, about the bigger need beyond the current campaign.

As of June 22, the organization had raised $102,886 toward its goal for the organization's SITAL. The program coordinates with 28 other Indian trans-hijra organizations. SITAL has provided 12,000 transgender families with food kits twice a month, shelter, COVID protection, medical kits, and even financial relief, giving out 1,500 rupees (about $20) per transgender individual on top of India's government-issued 1,500 rupees, she said.

Parivar Bay Area has also directly helped more than 25 trans women with opening small businesses as well as retrained the women to create products they can sell online at Parivar Bazzaar after their livelihoods were wiped out from COVID, she said.

The series of shorts is also in partnership with Gender Spectrum and the Roxie Theater.

Updated, 6/29/21: This article has been updated to state that the role in the film played by a trans woman was cut from the versions shown by Frameline and other festivals.