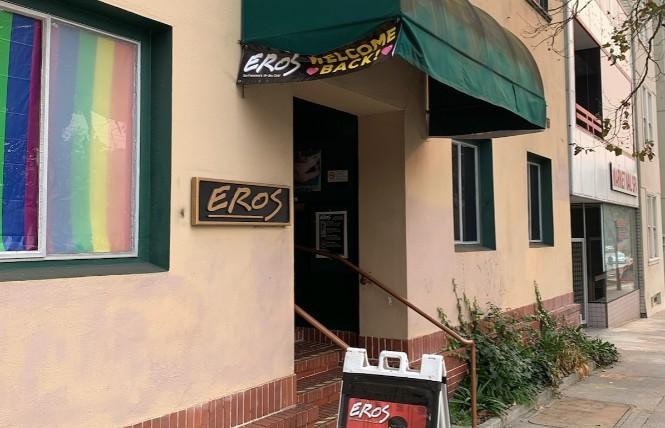 Eros, a gay sex club on Market Street in San Francisco, is now open again. It had briefly reopened last fall, but shuttered due to the COVID pandemic. Photo: Michael Yamashita

Bay Area gay sex venues are welcoming back patrons as the region reopens up after over a year of lockdowns due to the COVID pandemic.

Eros, a gay sex club on San Francisco's Market Street, has been open since May 20. It is open Wednesday-Sunday, from noon to 9 p.m.

Co-owner Ken Rowe said that people in the play space can have sex — as long as they wear a mask.

"We have condoms and lube upstairs and technically, if they're wearing masks, they can," Rowe said when asked about how intimate people can get at the reopened venue. "We've improved air ventilation. There are definitely rules we've had to adjust to."

Rowe said that Eros — the sole remaining gay sex club in San Francisco following the closure of Blow Buddies amid the pandemic last year — will be receiving further clarification from city officials about what's allowed in its play space soon. The locker rooms, steam rooms, and showers are open, and people don't have to wear masks in those spaces, though each has a capacity limit.

The club is operating at 25% capacity, that is, no more than 40 persons, Rowe said.

Patrons will be asked to show proof of vaccination, or of a negative COVID-19 test within the past 72 hours, to enter, Rowe said.

When asked about business, Rowe said, "The numbers are good."

"For Memorial Day — which we opened because it is a special day — our numbers were the same as in 2019," Rowe said.

Eros had been open for a brief time in October, as the B.A.R. reported at that time.

Due to the pandemic conditions then ongoing, Eros was rebranded as a "jack-off club," which up to a dozen people could visit, provided they physically distanced.

It had closed, along with the other sex venues, last March amid COVID-19 concerns.

One-time entry to Eros is now $20 and comes with a free six-month membership.

Rowe speculated that because Steamworks Berkeley reopens after the end of the mask mandate and capacity limits on June 15, that venue may not have a mask requirement when its hot tubs are turned on.

Steamworks Berkeley to open June 17
Steamworks Berkeley — the sole remaining gay bathhouse in the Bay Area following the closure of the Watergarden in San Jose amid the pandemic last year — did not respond to multiple requests for comment by press time. But, an outgoing greeting that plays at Steamworks' phone number states that it will be opening June 17.

The message states that Steamworks, which had heretofore been open 24/7, will be open from Thursdays at 8 a.m. until Mondays at 8 a.m.