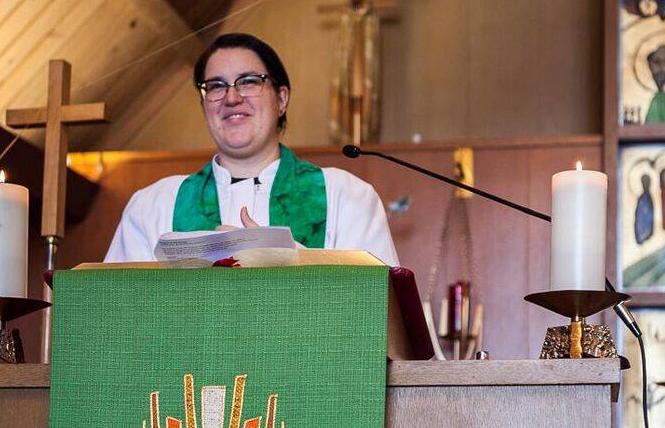 The Reverend Dr. Megan Rohrer, a San Francisco Lutheran pastor, is set to become the first openly transgender person ever to become a bishop in a major United States Christian denomination.

Rohrer, who has served as pastor of Grace Lutheran Church in the Outer Sunset since 2014 and as community chaplain coordinator for the San Francisco Police Department since 2018, was elected to a six-year term leading the Sierra Pacific Synod May 8 by a vote of 209-207, edging out the Reverend Jeff R. Johnson, who's pastor of University Lutheran Chapel of Berkeley.

Rohrer, 41, told the Bay Area Reporter that the election was a sign of how much the Evangelical Lutheran Church in America (the largest Lutheran community in the U.S. and the seventh-largest Christian denomination) has changed — Johnson is a gay man, and both were ordained "extraordinarily" at a time when gays and lesbians were not allowed to be appointed.

"When I began my ministry, gay and lesbian pastors couldn't serve openly, so I had to be ordained through an extraordinary process," Rohrer said. "Most people who become bishops follow as many rules as possible and move up, but at the time, in 2006, the official rules of the Lutheran Church said gay and lesbian people were supposed to be celibate."

Johnson did not respond to a request for comment.

After the ELCA changed its position in 2009, Rohrer joined six others in participating in a rite "to become part of the ordinary pastor list in the church."

"It's a great reminder of how much change is possible and how much progress there has been in the world for sure," Rohrer said.

"Gay pastors have the best vestments," they said. "Lesbian pastors can save churches that are falling down, and trans pastors can have conversations between things that people mistakenly believe are in binary opposition to each other."

Ted Kuster, a straight man who said he is a "friend, relative, and involved person" to LGBTQs, told the B.A.R. that the Lutheran church's "inability to assimilate LGBTQ folks and others who don't match the traditional concept of 'Lutheran'" kept him away for most of his adult life.

That is, until he heard about Rohrer four years ago.

"I'd heard it had changed its position on LGBT clergy and, since this was happening at a church right across from me, it made me curious, so I showed up to see what it was all about," Kuster said. "I was very impressed with Megan as a preacher, and their ability to make connections across lines."

Kuster said it is very important to be able to do both of the main functions of a pastor, which are shepherding the people and preaching to them.

"Megan is good at merging those in a very satisfying way," said Kuster, who is now president of the church's council.

Rohrer will be staying with Grace Lutheran through June, when the Reverend Mark W. Holmerud — who has been bishop of the Sierra Pacific Synod since 2008 — retires. Rohrer's installation is scheduled for September 11 at St. Matthew Lutheran Church in Walnut Creek.

The Sierra Pacific Synod is one of 65 synods (which, like dioceses in the Roman Catholic and Episcopalian churches, cover the congregations within a particular geographic area) in the ELCA. It covers Central and Northern California and Northern Nevada and includes about 200 congregations.

It is in this role that Rohrer hopes to be "pastor to the other pastors" and "cheerleader for congregations." They will be in charge of the approval of new ELCA pastors.

"I'm thinking about ways congregations can work together for justice projects and care for the world and our creation," Rohrer said.

Michael Pappas, a gay man who is the executive director of the San Francisco Interfaith Council, called Rohrer's appointment "historic."

"I've known Megan for the better part of 15 years," Pappas said. "There's a saying in the Letter of James — 'show me your works and I'll show you your faith.' Megan really has walked the walk. I marvel at her response to homelessness, her chaplaincy, and they're really on the front line of courage."

Rohrer's chaplaincy with the police department will have to end when they officially become a bishop later this year.

"I will complete the paid portion of my work with them, but as a bishop I will continue serving as I can as a volunteer blessing badges, first responders, and maybe praying at graduations," Rohrer said.

San Francisco Police Chief William Scott congratulated Rohrer on their appointment in a statement to the B.A.R.

"We're incredibly proud of our SFPD colleague, Bishop-elect Megan Rohrer, for making history as the first openly transgender person ever elevated to the role of bishop by a major U.S. Christian denomination," Scott stated. "At the same time, it's somewhat bittersweet for us because Reverend Megan is so universally well regarded as our department's community chaplain coordinator, and their ministry has been so meaningful to crime victims, their families and our members."

Scott thanked Rohrer for their service.

"Although we're saddened Reverend Megan will need to step down from that role, we're thankful that Bishop Rohrer will remain one of our sworn police chaplains and a cherished member of our SFPD family," Scott stated. "I'm grateful that our members will continue to benefit from their spiritual guidance and inclusive ministry."

Rohrer sees their new role as following in others' footsteps.

"I see my election as bishop as one of many types of jobs where LGBTQ people have had to work through fear and prejudice to do the things they're good at — like those in the military, police officers, and teachers — who did that work when it seemed it wouldn't be possible," Rohrer said.
Rohrer said that they hope their election sends a positive message to everyone. While some Christians don't accept LGBTQ people, "just because some voices are loudest doesn't make them the most faithful," they noted.

"There are a lot of faithful people who adore LGBTQ folk, and we are in the pews, in the pulpits and out in the streets trying to make a better world," Rohrer said. "If there are more ways to bring the fabulous back to church, if LGBTQ people need to be around faithful people so we can apologize for trauma we've caused, if people need hope and light in this world, I hope we can celebrate with each other more. 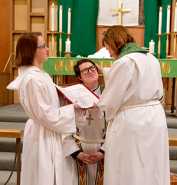