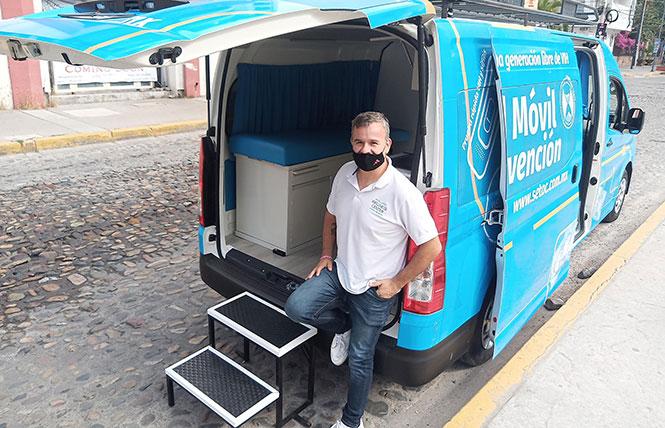 Puerto Vallarta's LGBT center, SETAC, is helping to support workers in the tourist-dependent city who are struggling in the wake of the COVID-19 pandemic. The resulting economic disaster shuttered businesses and forced many LGBTQs to move to Mexico City and other Mexican cities in search of work, said SETAC's executive director, Paco Arjona.

"It's very expensive here," Arjona told the Bay Area Reporter last week. "Even with the tourists not coming, the rent is still expensive."

The SETAC director added that for most, the loss of work is more concerning than the risk of contracting COVID-19.

"They say they can easily die without food, but can survive with COVID," Arjona said. The director noted that unlike the U.S., Mexico has no government-run unemployment insurance but that Mexicans in need can apply for some assistance from the government when funding is available.

Arjona said that many LGBTQs are drawn to Puerto Vallarta from other parts of Mexico like refugees, seeking acceptance that they can't get at home. He said some are unable to provide the proper identification to be able to get government assistance. Some transgender people, the director added, face obstacles if their name or sex does not match their birth records.

According to John Hopkins University's list of the 20 countries most affected by COVID-19 worldwide, Mexico ranks seventh in per-capita COVID-19 deaths behind the United Kingdom, the Czech Republic, Italy, United States, Portugal, and Spain. The country has recorded more than 171,000 COVID-19 deaths since the pandemic began.

In mid-January, Mexico recorded its deadliest week with more than 7,000 deaths in one week. As a result of the surge last month, the state of Jalisco, including Puerto Vallarta, instituted its third lockdown, forcing nightclubs and bars not serving food to close. Those orders were lifted February 12.

SETAC's PrEP counselor and psychologist Omar Ismael Rossi told the B.A.R. that he was diagnosed positive for COVID-19 last month but has had no symptoms other than a rash on his ankle. Rossi, 47, is originally from Argentina. His husband never contracted COVID-19.

"So I don't have any symptoms but it's a lottery. I know healthy people, strong people and the COVID killed them," Rossi said.

When asked about the impact of the pandemic overall on Puerto Vallarta's LGBTQ community, Rossi mentioned the New Year's Eve gay party organized by White Party founder Jeffrey Sanker that was held about 25 minutes outside of Puerto Vallarta in the neighboring state of Nayarit, which had less severe restrictions for gatherings than Jalisco. Rossi also noted the incident in which the gay party boat "Delice" capsized with about 60 people onboard on New Year's Eve. Fortunately, everyone was safely rescued but the optics of another large group gathering was not viewed favorably by many.

"We have bad press because of the parties because you have seen the boat in the sea, like the Titanic," Rossi said.

Arjona said he knew of just two younger men, 28 and 32, who died of the virus but both had preexisting conditions. He added that many of the older people he knew who have died of COVID-19 were not even aware that they had preexisting conditions such as diabetes or high blood pressure until they were diagnosed with the virus. Many of those who succumbed to the disease were obese, one of the major risk factors.

In October, SETAC received a grant from the Jalisco state government for $200,000 pesos or about $10,000 U.S. to help the population that SETAC serves, including transgender people; sex workers; men who have sex with men; and people living with HIV, including mothers with HIV who need formula because of the risk of breastfeeding for the baby.

SETAC's main wellness center is in the Versalles neighborhood, about halfway between the city's airport and the gay-popular Zona Romantica neighborhood, which is just south of downtown. It also has a center in Zona Romantica and a "Rapid Connect" referral booth in Zona Romantica's Lazaro Cardenas Park. The centers test for and treat sexually transmitted diseases and provide COVID-19 tests. Late in 2019, SETAC was given a van by the Jalisco state government to do testing for STDs and HIV. A donation by the Beef Dip Bear Week organization helped equip the van.

SETAC is part of a successful pilot program to administer PrEP to those at highest risk for HIV. The program uses the drug Movitrem, a generic version of Truvada. The program began in 2018 and currently serves 390 people with a goal for 450 participants. The program ends in June but will be picked up by the Mexican national government.

Arjona estimates that SETAC administers about 100 HIV tests per week and that about three or four of the hundred are diagnosed HIV-positive. HIV treatment is free in Mexico and SETAC provides staff to shepherd the newly diagnosed to the city's public hospital where the treatment is administered. SETAC's staff includes nurses, three doctors, and administrators.

Currently, the Pfizer, Moderna, AstraZeneca, Russian's Sputnik V and China's CanSino Biologics and Sinovac vaccines have been approved for use in Mexico and are being given to health care workers and soon to people 60 and over. The vaccines come too late to save the city's normally busy winter tourism season but it is hoped that as more people get vaccinated in the U.S. and Canada, the second half of 2021 will be the boost that will save many of the city's struggling businesses.

For more information on SETAC and to make a donation to the organization, visit https://setac.com.mx/

Finger-pointing begins after hillside collapse in Puerto Vallarta
Sign up!