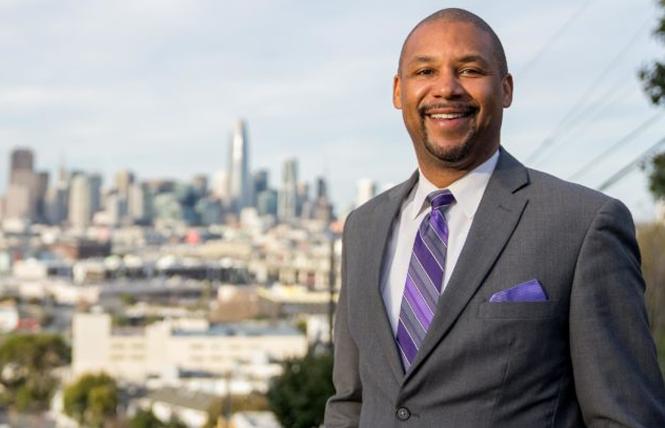 History was made last week when the San Francisco Board of Supervisors selected Shamann Walton, who represents District 10, to be its new president, the first Black man to take the powerful post. During their four-hour inaugural meeting January 8, board members spoke eloquently about the need to work together, and with the mayor, as the city confronts the global pandemic and the economic fallout from it. The suffering from COVID-19 and job losses is overwhelming, however, we'd like to remind the supervisors not to neglect several LGBTQ community initiatives that are poised to start, were stalled, or not started at all.

SOGI data
A hearing needs to be called on how the city is collecting sexual orientation and gender identity data, as the COVID health crisis showed it continues to be an issue. Systems need to be updated and, as we have reported on, there are other issues to address, particularly around how to ask about gender identity. In 2019, gay District 8 Supervisor Rafael Mandelman held a hearing on the matter, in which representatives from a half-dozen departments pledged to do better to meet a 2017 mandate of SOGI data collection by the Department of Public Health; Mayor's Office of Housing and Community Development; Department of Human Services; the Department of Disability and Aging Services; and the Department of Homelessness and Supportive Housing. LGBTQ advocates have long argued that the city cannot adequately address the needs of the community without this information. As the pandemic has shown, SOGI data is more important than ever.

LGBTQ appointments to boards, commissions
Fortunately, not everything we're discussing costs money, and this is a matter of political will on the part of the supervisors. We need more qualified LGBTQ people, especially queers of color, to be nominated and confirmed to city boards and commissions. We saw this play out a couple of weeks ago during the board's 9-2 vote for Manny Yekutiel's appointment to the San Francisco Municipal Transportation Agency Board of Directors. Of the seven SFMTA board members, only Yekutiel is queer. At their meeting, the supervisors got sidetracked over a conversation about the lack of Latino/a people on the SFMTA board, which, while also important, doesn't diminish the fact that Yekutiel, a small business owner, also brings that constituency representation that has long been missing. It took a straight ally, District 11 Supervisor Ahsha Safaí to point out that there were no LGBTQ people on the SFMTA board, when Mandelman should have also spoken up in Yekutiel's defense. Thankfully, his nomination was approved and the board agreed that the next open seat should go to someone from the Latino/a community.

Revamped SF HRC LGBTQ panel
As we reported last week, the San Francisco Human Rights Commission is revamping its LGBTQI Advisory Committee three years after it went on hiatus. This time, it will include five seats for elected officials. The Board of Supervisors should take this advisory panel seriously, and Walton, as board president, should attend its quarterly meetings. With a number of community members and nonprofit leaders also expected to make up the panel, it will provide a good opportunity for Walton (and the other electeds) to learn of queer issues that may require city action.

Affordable housing in D8
In 2019, San Francisco voters passed Proposition A, a $600 million affordable housing bond. The ballot language prioritized $150 million for senior housing, specifically developments that are welcoming of LGBTQs. The bond also stated that District 8 needed to be a central focus for where projects are funded, due to its lack of affordable housing units and having lost a significant number of rent-controlled units that were taken off the market because of Ellis Act evictions or owner move-ins. Now is the time for the Board of Supervisors to work with Mayor London Breed to identify and acquire sites in D8 for affordable housing projects that can be funded through this bond.

Do more for LGBTQ asylum seekers
Leaders regularly promote San Francisco as the best city in the world for LGBTQ people yet do little for queer asylum seekers or refugees. The city's high housing costs often prevent refugees from settling here, where they could be closer to a wide range of LGBTQ resources to help them. Refugee housing services in the Bay Area are mostly limited to Jewish Family and Children's Services of the East Bay and a couple of nonprofits. That doesn't meet the needs of LGBTQ refugees and asylum seekers who want to call San Francisco home and the city needs to do more.

Drag laureate, LGBTQ cultural strategy
One of the previously little known components of the city's LGBTQ Cultural Heritage Strategy report was the establishment of a drag laureate post. This ceremonial role would promote the city's drag and nightlife culture. Promoting visibility for the queer community would not cost much money and likely would reap positive benefits, especially once the pandemic ends. Yet, the Board of Supervisors has dragged its feet and now West Hollywood is poised to become the first city to have such a position. Part of the problem is that the report has not been formally adopted by the board; that should change as Mandelman is expected to call for a hearing this spring. As we reported last week, the cost to implement the cultural strategy's multitude of initiatives is estimated to be at least $10.2 to $15.7 million. The price tag to pay for the top 10 prioritized steps called for in the document is pegged to cost anywhere from $1.3 to $2 million.

We understand the budgetary constraints the city is under due to COVID-19. But it is imperative that the supervisors prioritize LGBTQ issues, particularly those that won't cost a lot of money. The city recently was able to come up with $1.6 million over the next two years for Black trans programs, and that is certainly a great beginning. But more needs to be done to include the queer community in city government, and the areas outlined above offer a good starting point.