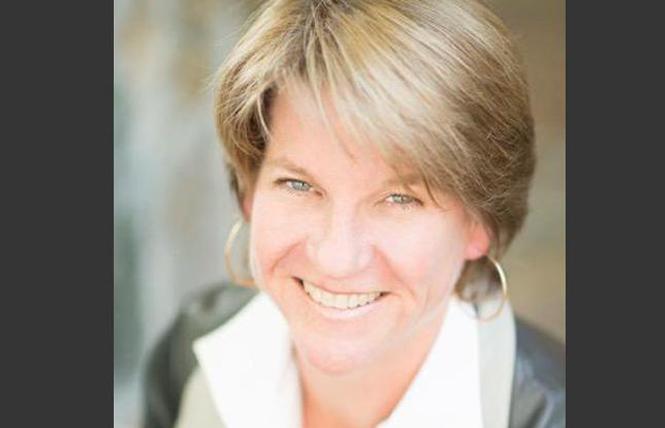 An out Peninsula city councilwoman is running for an open seat on the San Mateo County Board of Supervisors in 2022. Should Laura Parmer-Lohan, serving this year as mayor of San Carlos, be elected then she would become the first out woman to serve on the county board, likely its lone LGBTQ member, and the first mother on it in recent memory.

Parmer-Lohan would also be the first out lesbian elected to a board of supervisors in a Bay Area county outside of San Francisco. And her election would double the number of out county supervisors in the nine-county Bay Area region should gay San Francisco Supervisor Rafael Mandelman win reelection that fall to his District 8 seat.

Elected in 2018 as the first out person on the San Carlos City Council, Parmer-Lohan is president and CEO of the marketing and consulting firm Ruckus Partners. She is part of a rainbow family that includes her wife, Kathy Parmer-Lohan, executive director of the San Carlos Education Foundation, and their sons Bradley, a freshman at UC Davis, and Gregory, a high school junior.

She announced her decision to seek the county board's District 3 seat Monday, January 4, after being the first to pull papers for the race and going live with her campaign site at https://www.lauraforsupervisor.com/. In a Facebook post she unveiled her campaign signage and tagline of "Vision, Leadership & Results."

"I am honored to serve as Mayor of San Carlos this year. I will work hard to ensure our community remains vibrant during these challenging times. I love this work. As many of the issues that we face in San Carlos are regional in nature, I am announcing my candidacy for San Mateo County Supervisor District 3 in 2022," wrote Parmer-Lohan, who has already raised $50,000 toward her race.

The incumbent, Supervisor Don Horsley, will be unable to seek reelection that year due to term limits. Also seeking to represent the sprawling supervisorial district that stretches from the coastal towns along Highway 1 to the suburban cities of Atherton, San Carlos and parts of Menlo Park and Belmont is Menlo Park City Councilman Ray Mueller, who also pulled papers for the race Monday.

In a phone interview Tuesday with the Bay Area Reporter, Parmer-Lohan cited three issues she has worked to address in her city that she would focus on countywide: affordable housing, access to child care, and controlling wildfires.

"When I look at the issues we are working on in San Carlos, they are regional in nature. This is an opportunity to really drive solutions for our shared concerns," said Parmer-Lohan, who has tapped into her experience working for various health care companies for guidance as her city confronts the impacts of the COVID-19 health crisis. "I will work to make sure we recover from this pandemic in an equitable way too, so our community remains vibrant and can thrive."

Tom Nolan was the first openly gay politician to hold elected office in a suburban part of the Bay Area when he won a seat on the San Mateo County Board of Supervisors in 1984. Rich Gordon then became the county's second gay supervisor, serving for roughly 13 years until his election in 2010 to the state Assembly.

Gordon is among those who have early endorsed Parmer-Lohan, as has Ken Yeager, a gay man who was the first out supervisor in Santa Clara County.