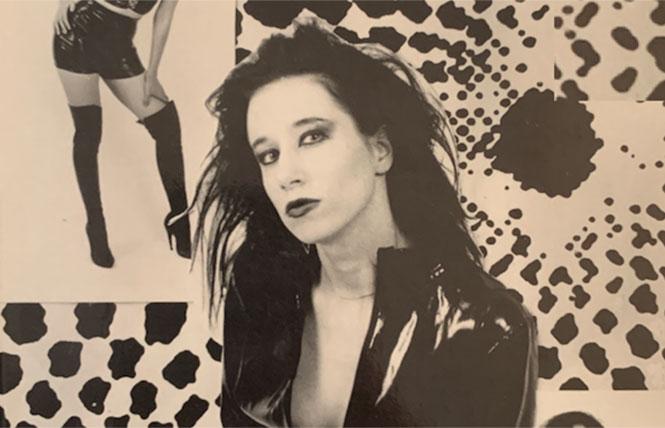 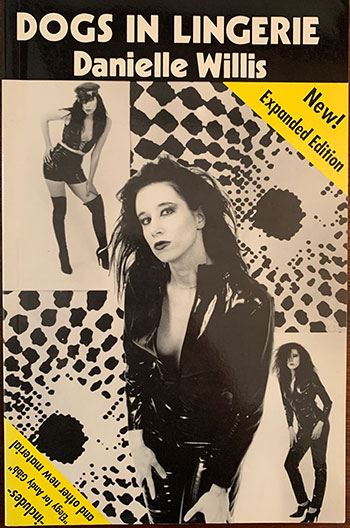 Willis also stripped at the now-closed Mitchell Brothers O'Farrell Theatre, toured the world giving readings, and had two sold-out theater shows; The Methedrine Dollhouse (1989) at The Exit Theater and Breakfast in the Flesh District at Climate Theatre, directed by Cintra Wilson (1992).

Willis' writings were an extreme mix of goth, sex work, humor, heart, and hard drugs in San Francisco. In doing so she, somehow, created a book identifiable to any outsider. Today there are still fan sites, Pinterest and Facebook pages in her honor, though Dogs in Lingerie was her last published book. Even through the book's grittiness, the heart and tenderness of Danielle's sensibility is apparent. Poet Steven Reigns interviewed Willis over the phone on the occasion of the book's 30-year anniversary. 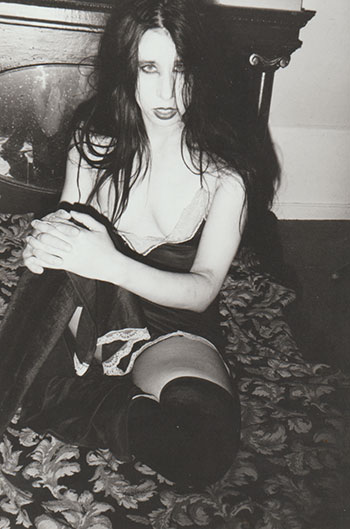 The book is dedicated to Dish.

That was my boyfriend. He was an amazing person, a drag queen and Vietnam veteran. He came back from Vietnam and became a street walking drag queen for a few years. Then he got married to a girl who turned out to be a junkie and they broke up. Then he met me. We ended up becoming pretty much married for about five years. Then I ended up breaking up with him to go out with Brigit Brat.

Is Dish the subject of the poem, "The Awful Truth?"

Yeah, that was that was about him. I was getting kind of sick of being with him because I was much younger and I was more attracted to younger drag queens and younger women. I almost didn't publish that poem because I felt so guilty about even writing it.

Vernacular for people and experiences has changed in the 30 years. In Dogs in Lingerie, you use certain terms to describe your interests. How would you sexually identify yourself at that time?

I was an androgynous pansexual. I guess I kind of see myself as sort of a tranny boy, in some ways. I would always say that I was just an androgen. I'm married now to a heterosexual male and he's happy with me and I'm happy with him. Basically, I believe in looking at people as people, not as genders. I take a person by person relationship. It doesn't matter if you're a boy or girl or whatever. 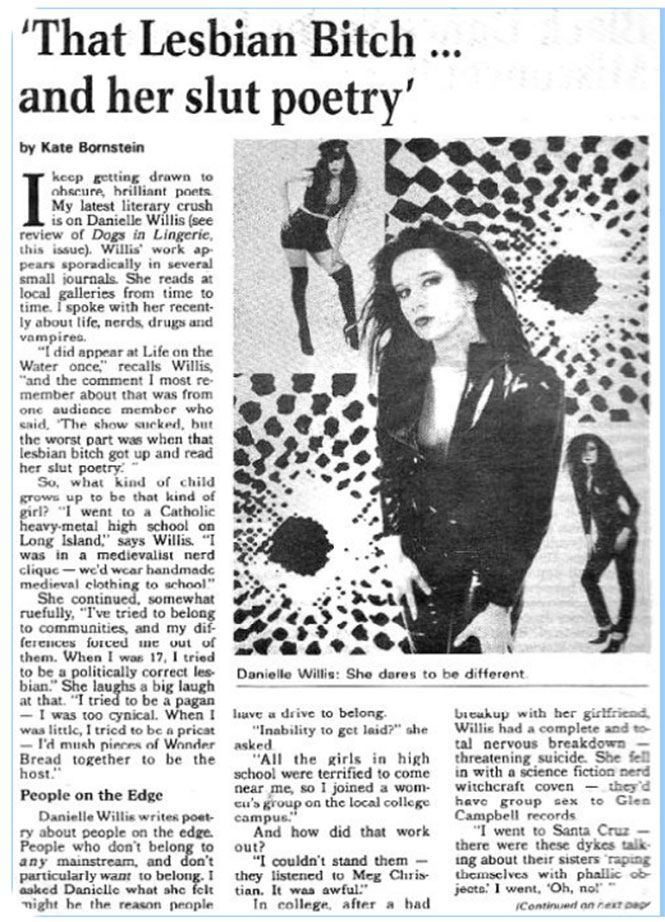 Who is Jean that is mentioned throughout the book?

I met Jean when I was 17 Jean and she is why I dropped out of my Ivy League school. She broke my heart and I had a nervous breakdown. I went to a mental hospital for a while and it was terrible. It wrenched my heart out and it took me a long time to get over her. She was the first person that I ever dated significantly. I had a really cute boyfriend I went to a prom with but we never had sex because I was scared of penises at the time. She was the very first person I ever had sex with. I loved her so much but was also getting sick of her. But, you know, she got sick of me first, I guess.

Ad for Danielle Willis' show, 'Breakfast in the Flesh District'

Whatever happened to your novel, Miranda? The name shows up in Dogs in Lingerie.

I published part of it and lost interest in it but I'm actually working on it now. I'm going to call it The Slumberland Gallery. The problem is I have very low concentration skills. That's why I've always had a better time with poetry than long format writing. I'm also a perfectionist. It's hard for me to put anything out that I don't think is perfect.

You have gotten quite a bit of press.

I've done a lot of things that have gotten a lot of attention. It's a mixed bag because you get stalkers and all kinds of weird attention. Then the attention fades and you can get depressed. I'm amazed that I haven't done anything for a long time and there's all these fan sites. It's flattering. I feel that there's a pressure to be like the person I was 20 years ago and I'm not that person anymore. In terms of physical appearance and stuff, I still have my fangs and I'm a little vain. I really appreciate the fact that there's a lot of interest in my work, that's really inspiring to me.

Does it sometimes feel like the storyline about you or your image sometimes overshadows the heart in your work?

It absolutely can. I'm just this humble, married woman up in Shasta with my dog. I moved from San Francisco about five years ago. I just fell in love with Mount Shasta. It's really weird--it's like a little hippie town with loggers. The rednecks and the hippies. They all get along.

Steven Reigns is a Los Angeles poet and founder of The Gay Rub.
www.stevenreigns.com www.thegayrub.com