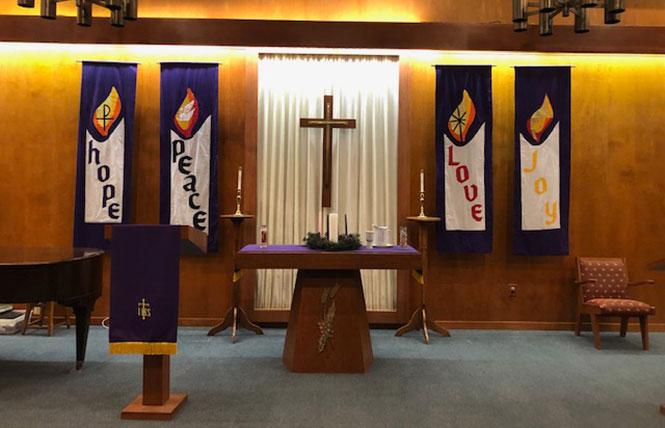 And the angel said to them, "Be not afraid, for I bring you good news of a great joy which will come to all the people ... and suddenly there was with the angel a multitude of the heavenly host, praising God, and saying, "Glory to God in the highest and peace to God's people on Earth ..." and they went there with haste, and they found Mary and Joseph, and the baby lying in a manger. (Luke 2:1-20)

And the angel said to them, "Be not afraid, for I bring you good news of a great joy which will come to all the people ... and suddenly there was with the angel a multitude of the heavenly host, praising God, and saying, "Glory to God in the highest and peace to God's people on Earth ..." and they went there with haste, and they found Mary and Joseph, and the baby lying in a manger. (Luke 2:1-20)

This is a good year for Christmas. We need the joy, the light, hope, the gifts, the promise, the peace. All of it. And once I looked at the past through our history and our current needs, I think Christmas can deliver all of those things.

Every year at this time, I start rereading the two Christmas stories in the Bible — the one more comforting from Luke cited above and the other more harrowing from Matthew 2:1-18. I also review Christmas interpretations that I especially treasure, ranging from "Black Nativity" by Langston Hughes to the hilarious Christmas pageant scene in Rita Mae Brown's classic lesbian novel "Rubyfruit Jungle" (young lesbian Molly Bolt as a fierce Virgin Mary) to W.H. Auden's "A Christmas Oratorio:" "We who must die demand a miracle ... music and sudden light have interrupted our routine tonight, and flushed the filth of habit from our hearts." I watch "A Charlie Brown Christmas" with glee as Linus explains to Charlie Brown the true meaning of Christmas with simplicity and a succinctness that I have never attained in my 40 years as a preacher. Even Truman Capote's "A Christmas Memory" speaks to me, though it's not very Christmassy. And we are as likely to know songs about a peculiar reindeer or Grinch, as we are the Bible stories.

I cherish memories of my cousins and me waiting in an upstairs bedroom in Michigan while Santa brought presents before Midnight Mass. I can feel us crowded into those small rooms, listening, waiting, expectantly, even in painful times. It is true that many queer children learn to keep joy alive in the secret recesses of our hearts, just as Mary did — "keeping all these things, pondering them in our hearts" — and we draw on them as reserves of invincible strength in later life.

It is still my memories of the Castro district in San Francisco in the 1980s and 1990s that eclipse all the other memories. During those years, I was pastor of the now relocated Metropolitan Community Church-San Francisco. The now-vacant building on Eureka Street was home to many church and community activities throughout the year. The whole neighborhood brought a vibrancy to Christmas and a meaning that still burns into my heart. Lights, garland, Santas in chaps, extraordinary generosity for children throughout the city in need of clothing, food, toys.

Christmas demanded expression in the Castro. In the same three-hour period on Christmas Eve, we had three services at MCC, one at Most Holy Redeemer, and three San Francisco Gay Men's Chorus performances at the Castro Theatre. Christmas demanded expression because many of us were estranged from our families because of our gayness or having AIDS. Our families of choice celebrated with us in the pain of this estrangement. You could hear a lot of crying in church as we lit our candles on Christmas Eve and sang "Silent Night." We claimed Christmas as our own — secular and religious. And the Gay Men's Chorus did the same at the Castro Theatre. Christmas was needed then. It couldn't be contained, confined, or domesticated by the traditional religious authorities, because it doesn't belong to them — it belongs to us. "Mary had a baby," as the spiritual sings, "My Lord!" And that baby was us.

This year I'm reading the Christmas story again for 2020 and I wonder: where are we in this ancient tale?

Caesar is still the emperor, causing families to be separated by unjust immigration policies that refuse to acknowledge that migration is a human right. I know what the sound of separated families sounds like because I remember the cries of lesbian mothers deprived of their children solely because they loved other women, or who hid in secret in order to remain with them, for there was no path to legalization then. This week, at least 4,000 children are in Immigration and Customs Enforcement prison — over 70,000 this year have been processed through this system — and countless more remain outside our borders awaiting asylum because of our heinous "Remain in Mexico" policy. And perhaps worst of all, if that's possible to say, over 600 children are absent from the manger this year — children who are perhaps permanently separated from their parents by a policy funded by our taxes. More face deportation daily.

King Herod is still in the palace and is on a killing spree trying to execute as many death row prisoners as he can before he leaves office. Incarcerated people are dying in detention because we can't provide adequate coronavirus protection. Herod's foot soldiers are on the march, intimidating Black voters, vandalizing Black churches in Washington, D.C., tearing down Black Lives Matter banners from their sanctuary walls.

And though we have a promising vaccine, the distribution challenges remain. What did we learn from AIDS? Who has it determines the response to it. And our health care system is biased against the population most affected.

But the promise of the angels was for ALL the people, no exception. And still, angels throng and sing.

"I feel like healing is coming," critical care nurse Sandra Lindsay proclaimed after receiving one of the first inoculations. And I believe she wasn't just talking about COVID-19. Six months after it happened, I am still marveling that because of a show of solidarity by non-LGBTQ angels, a rainbow flag flew over City Hall in Foster City, California where I pastor a diverse and radically inclusive church. Healing is coming.

I reread the Christmas story and I realize that angel hosts have turned out in solidarity for racial justice in unprecedented numbers this year. Shepherds like nurses, doctors, orderlies, and EMTs are tending the sick in hospitals in record numbers. Shepherds like Stacey Abrams are making sure that the votes of Black voters in Georgia get counted. Healing is coming.

Mary and Joseph and Jesus were a holy family; all families by birth or choice are holy families. Our collective gift as a community is the capacity to comfort each other in the midst of isolation, and to live into hope, and to believe that as dangerous a place as the world is to bring Love into right now, we are ready to say yes, like Mary did, and bring more love and light and peace.

For I bring to you news of great joy: healing is coming.