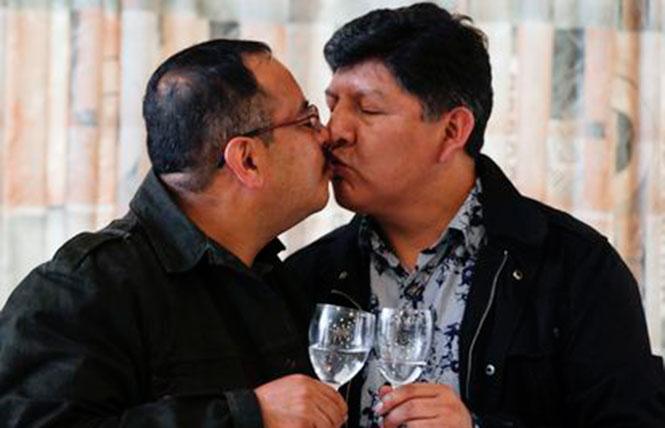 The lawyer and businessman were joined in a civil union ceremony December 11, five months after they won their two-year legal battle against the country's civil registry.

Bolivia's Constitutional Court sided with the couple in July.

Montano, 45, and Aruquipa, 48, sued Bolivia's civil registry when authorities refused to register their relationship in 2018.

Same-sex marriage is not legal in Bolivia.

The couple have been together more than 11 years.

In their administrative appeals, Montano and Aruquipa argued the denial of legal recognition of their relationship violated international human rights standards and discrimination under Bolivian law.

The civil registry rejected registering their union for a second time in September 2019, according to Human Rights Watch.

The case made its way to Bolivia's Constitutional Court in La Paz.

The court agreed with Montano and Aruquipa that their rights, along with the country's constitution and international law, had been violated.

The court cited the Inter-American Court of Human Rights's 2017 mandate to legalize same-sex unions throughout Latin America and the Caribbean.

Aruquipa, a well-known local LGBTQ activist, saw the court's ruling as an "initial step" toward the goal of "transforming the law," he told reporters at a news conference following their ceremony.

They "deserve to be recognized by the state and its institutions," he said. "All civil registries in Bolivia should stop treating them like second class citizens and start recognizing their unions."

In recent years, conservative and religious organizations have fiercely fought against LGBTQ rights, including legally recognizing same-sex relationships, in Latin America and the Caribbean.

Despite the opposition, same-sex marriage is legal in Argentina, Brazil, Colombia, Costa Rica, Ecuador, and Uruguay as well as jurisdictions of French Guiana, the Falkland Islands, Mexico, and South Georgia and the South Sandwich Islands.

South Georgia and the South Sandwich Islands are British Overseas Territories. Same-sex marriage was legalized in 2014, according to the United Kingdom government's website.

Civil unions are legal in Chile.

Sixty-three members of the country's 69-person parliament voted in favor to amend articles 213 and 214 of the Penal Code, which criminalized "unnatural sex."

Reuters reported that six members were absent from the vote, citing MP Ugyen Wangdi, the vice chairperson of a joint panel considering the changes.

The laws were widely perceived to prohibit same-sex relations in the small Himalayan country that has a population of nearly 800,000.

It was not a happy situation for the country's LGBTQ community. The law left many queer community members vulnerable to discrimination, stigma, and even blackmail, Tashi Tsheten, a founding member of Rainbow Bhutan, the country's LGBTQ organization, told the New York Times.

The kingdom is famous for its "gross national happiness" index.

LGBTQ activists celebrated the passage of the new law, which is now heading to Bhutanese King Jigme Khesar Namgyel Wangchuck's desk for his signature.

Once that happens, the number of countries that continue to criminalize homosexuality will be 66.

However, lawmakers did not completely strike down the law. Instead, they clearly defined "homosexuality between adults shall not be considered unnatural sex," according to OutRight Action International.

The law grew out of HIV prevention work done by the country's health ministry in the country's gay community, Tsheten told the Times.

"What we did was just show people in Bhutan that we exist," he said about the agency becoming an ally.

That led Finance Minister Namgay Tshering, who previously worked at the health ministry and the World Bank, to insist that Parliament repeal the language in the 2004 law, Tsheten told the Times.

He argued it was never enforced and it was an "eyesore for international human rights bodies."

The decision comes after neighboring India decriminalized homosexuality in 2018. LGBTQ people will be included in nearby Nepal's census next year.

"I think the bill being passed on Human Rights Day itself is a momentous day for everyone in Bhutan," Tsheten told Reuters.

"Bhutan chose to tell a different story and create a different future for itself," she said in a December 10 statement from the organization.

The new rules impose stringent requirements upon asylum seekers fleeing persecution and violence, making seeking asylum in the United States next to impossible.

LGBTQ and women asylum seekers fleeing persecution and gender-based violence will be harmed most by the new law that goes into effect January 11.

"The rule's far-reaching changes to asylum set a dangerous framework, endangering the lives of thousands of asylum-seekers who face anti-LGBT laws and anti-LGBT violence around the world," Terra Russell-Slavin, director of policy and community building at the Los Angeles LGBT Center, said in a statement following the rule's finalization December 10.

Some of the new rules place queer and transgender asylum seekers and refugees' lives in increased jeopardy.

Asylum seekers will be forced to claim asylum in countries they travel through to get to the U.S., or their claims will be denied.

Refugees will be denied asylum if they attempt to circumvent the system by illegally entering the U.S.

Military, police, and other government officials' torture of refugees will not count as state persecution in refugee's claims if they are acting on behalf of a country's government.

Under the new rule, any hint that asylum could safely be sought in another country traveled through on their way to the U.S. could be a reason for denial by an adjudicator.

The new rules stipulate "feminism is not political opinion," noted Human Rights First in a December 10 response to Trump's administration finalizing the law.

Under the new law, adjudicators will have more power to block claims and an immigration judge will be able to deny hearing an asylum seeker or refugee's claims due to not meeting the new standards.

Once in effect, the law will turn the U.S.'s "asylum adjudications into a Kafkaesque system for denying asylum," Eleanor Acer, senior director of refugee protection at HRF, said in the statement.

Nearly 90,000 individuals and organizations submitted public comments on the proposed rules between June 15 and July 15.

Immigration and human rights experts called upon president-elect Joe Biden not to enforce the new rules.

Biden has vowed to roll back the Trump-era assault on immigration, including laws governing asylum seekers and refugees.

The $5,000 grants awarded to alumni of HRC's global programs — a network of 180 LGBTQ advocates from 90 countries — will support 20 initiatives advancing the human rights of queer people in 17 countries.

HRC also joined a public campaign with other advocates calling upon Nigerian President Mahammadu Buhari to act against ongoing human rights abuses in the West African country, according to the release.

The grants are to "strengthen efforts to promote LGBTQ human rights" in "countries from every region of the world," HRC President Alphonso David stated in a December 10 news release.

The goal of launching the grants program on Human Rights Day was to "signal to the international community that equality must continue to be a priority," he continued.

"We must recommit ourselves to putting in the hard work to build a world where every person is empowered no matter what country they call home," he said.