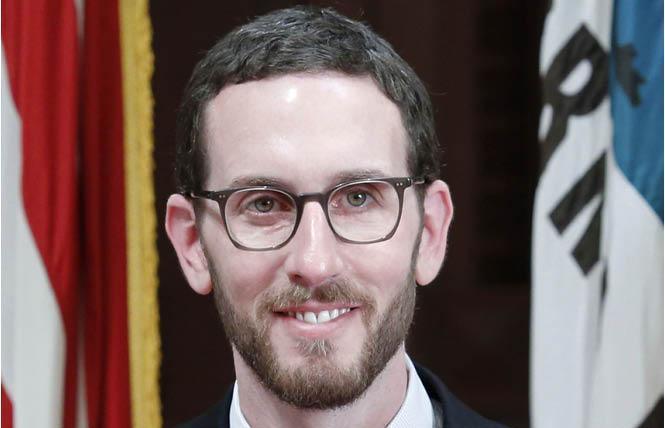 A gay state lawmaker wants an audit of California's LGBTQ data collection efforts as health officials continue to drag their feet on asking people what their sexual orientation is when they test for COVID-19.

Meanwhile, San Francisco officials are working to improve their SOGI data collection through its testing sites.

Senator Scott Wiener (D-San Francisco) told the Bay Area Reporter Thursday that he plans to send a legislative audit request to the Joint Legislative Audit Committee in order to examine how state health officials are collecting not only sexual orientation but also gender identity demographic data. Since 2018, a number of California departments and agencies focused on health care and social services were to be collecting SOGI data after lawmakers enacted several pieces of legislation requiring that they do so.

With the Legislature in recess until January 4, it will not be until sometime in 2021 that such an audit could be conducted. It was announced December 14 that newly seated gay state Senator John Laird (D-Santa Cruz) will be vice chair of the committee that oversees audits.

Wiener also this week sent a letter to the state's health department calling on it to direct "all testing sites, regardless of whether they are state-sponsored," to collect the SOGI data and for the agency to begin publishing it. He told the B.A.R. he also plans to bring up the issue with Dr. Tomás Aragón, San Francisco's health officer who was recently named by Governor Gavin Newsom as the new director of the California Department of Public Health.

At the onset of the health crisis in March, CDPH was not collecting SOGI data among those infected with the coronavirus. For months Wiener and other LGBTQ advocates had called on health leaders to start asking people being tested for the virus if they are members of the LGBTQ community.

Without such information, it is unknown what the impact of the pandemic has been on the state's LGBTQ residents, many of whom have comorbidities that put them at greater risk should they become infected with the coronavirus. Fed up with the lack of action, Wiener authored a bill to require the SOGI data be collected.

Lag in implementing bill
Governor Gavin Newsom signed the bill into law in September, and it was to have immediately taken effect. But as the Bay Area Reporter first reported in November, state and local health officials have not interpreted the law or regulations instituted in July by Dr. Mark Ghaly, the secretary of the California Health and Human Services Agency, to mean they need to ask everyone getting tested for COVID-19 the SOGI questions.

People seeking tests via the city of San Francisco, for instance, are not asked about their sexual orientation when they make an appointment. They are asked about their gender identity and can choose such options as "Trans Female," "Trans Male," or "Genderqueer/Gender Nonbinary."

Clair Farley, a trans woman who is the director of the Mayor's Office of Transgender Initiatives, had told the B.A.R. it was the city's understanding that both the regulations and Senate Bill 932 only mandate reporting SOGI data for positive test results. She added that the city's health department was ascertaining the sexual orientation of people who test positive for COVID-19 via contact tracing.

A few jurisdictions, such as Monterey County, are asking the SOGI questions of people when they get a COVID-19 test. But most of the state's major metropolitan areas are not, noted Wiener.

"I will be honest, it is horrifying San Francisco isn't implementing it, of all places," Wiener told the B.A.R. "I think it is random. Some providers are asking it and others aren't. CDPH doesn't appear to be doing anything to ensure consistency."

On Friday, December 11, Farley told the B.A.R. that her office has been working with the city's Department of Public Health to update its SOGI data collection at testing sites and expects that the sexual orientation questions will be added to the demographic information people are asked to provide.

"Since the end of April the SFDPH has been collecting sexual orientation and gender identity during contract tracing. We are working with the department and our city sponsored testing provider, Color, to expand the data requested at the time of testing or during registration," stated Farley. "We have received a commitment that sexual orientation will be added by the provider."

Wiener expressed his frustrations about the lack of LGBTQ COVID information in a letter he sent December 8 to Dr. Erica Pan, the acting director of the state health agency. And he demanded she take immediate steps to fully implement his legislation, SB 932.

Wiener also pointed out that "time is of the essence" as COVID cases and hospitalizations are surging across California, leading to counties again ordering their residents to remain at home as much as possible, curtail social gatherings even outdoors, and cancel any plans to spend the holidays with family or friends outside of their households.

"Every day without this data collection, particularly during the current surge, means that tens of thousands of COVID tests will lack this information. And as California formulates its vaccine distribution plan — a plan based on data around risk levels — the LGBTQ community will be left out entirely," wrote Wiener.

"We join Senator Wiener in calling on the state to provide additional guidance and support so that all testing sites are consistently collecting this vital data," she stated. "This will help assure our community gets access to the resources we need since we know that LGBTQ community already experiences disproportionate rates of pre-existing conditions, homelessness and poverty."

That is why, Farley stressed, "collecting comprehensive data is essential in supporting all of our communities most impacted by the pandemic including our LGBTQ residents. We are continuing to work on expanding these efforts."

UPDATED 12/11/2020 with comments from San Francisco's director of the Mayor's Office of Transgender Initiatives.

Updated: Wiener bill would mandate SOGI data for COVID-19 in California
Sign up!