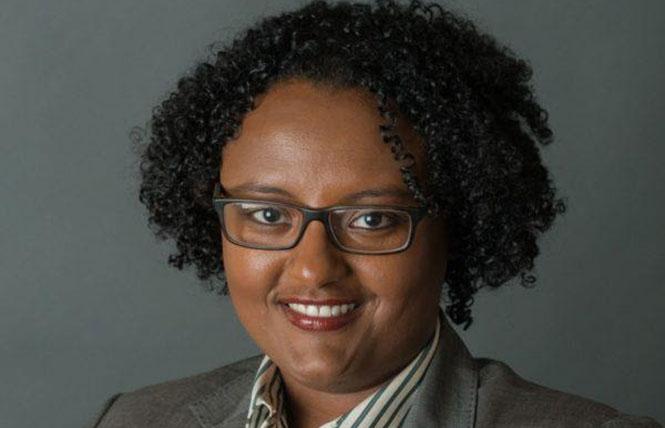 Mimi Demissew told the Bay Area Reporter she is excited to have recently moved across the country to the East Bay as she approaches one month on the job as the new executive director of the Our Family Coalition.

The board of the San Francisco-based organization, which is nearing its 25th anniversary, saw Demissew as the best person to implement changes following a national search, according to queer and lesbian board co-chair Lisa Fujie Parks. Demissew started the job virtually.

Demissew, who is married to a woman and identifies as a Black woman who is "part of the community," said she is up for the challenge.

"I saw the mission of OFC and it spoke to me, advocating for sexual and gender-minority families. As a parent myself, it looked like an organization doing good work and on a trajectory for growth. It seemed like a good fit," Demissew, who has a 2-year-old toddler, said. "The mission statement is expanding. As an organization we are doing a lot to advocate and support gender-minority families and we are going to be expanding even more."

Demissew, 42, is a former longtime resident of Baltimore, where she was the executive director of the Pride Center of Maryland. Parks said that Demissew's experience with turning the center's deficit into a surplus was a key part of her appeal to Our Family.

"My background is in organizational development, and that also includes financial accountability," Demissew said. "Coming into the organization there are good bones in place, so it's about expanding those to match where the organization is going next."

Mari Villanluna, Our Family Coalition's parent power lead, was on the search committee.

"OFC's legacy is resilient, and rooted in social justice," she stated in a release from the organization. "From getting to know Mimi on the search committee, I know that she is going to take the organization to even greater levels, and will continue to expand our commitment to equity, social justice, and family diversity. As a parent leader, I am hella excited to work with her."

Parks wrote in a text that the agency wasn't making public Demissew's salary, but stated that previous executive directors made between $100,000 and $110,000.

"We have faced fiscal challenges in the last years and decided someone who had strong fiscal management skills could help us through these difficult times," Parks said. "We are at a point in our life-cycle, with our 25th anniversary next year, where we are in a regeneration."

Demissew will be leading the organization through a community needs assessment that will begin in January, which she said will "really help us to get more thoughtful about the data and make sure we are meeting the needs of the people we are serving."

One population that Demissew wants Our Family to expand to is LGBTQ seniors. Already facing an epidemic of loneliness, LGBTQ seniors are increasingly isolated by the effects of the COVID-19 pandemic.

"We want to do more work with the elders in our community," Demissew said. "There are a lot of elders without a connection to families of their own. We are finding [for] a lot of our elders that family support network, connecting those folks, and facilitating that elder-younger intergenerational interaction."

Parks said that Our Family Coalition will be hosting a virtual town hall December 4 from noon to 1:30 p.m. — there is a "broad community invite" and more information will be announced "in the coming weeks," she said.

"After a year of growth — and six months adapting support services to life in a pandemic — I know how life-saving the work of this organization is," former interim executive director Sam Ames stated in the release. "I'm thrilled to be passing the torch lit a generation ago to Mimi Demissew, a leader with years of dedication to the lives of LGBTQI people."