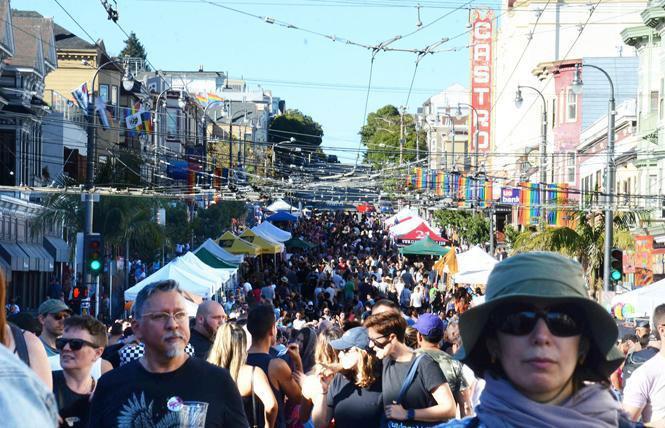 Crowds filled Castro Street during the 2018 fair. This year there will be a scavenger hunt people can access on their phones, and T-shirt sales to benefit nonprofits. Photo: Rick Gerharter

Two months after the cancellation of the in-person Castro Street Fair, which would have been October 4, Fred Lopez, a member of the fair's board of directors, announced how it is going to be commemorated this year at Thursday's virtual meeting of the Castro Merchants.

"We are excited we have come up with a couple of ways to commemorate the Castro Street Fair," Lopez said. "Some are on social media and some are designed to get people into the neighborhood."

One of those is a Castro scavenger hunt participants can access through their phones while in the neighborhood through October 10. For more information, click here.

"We wanted to give people a reason to be in the Castro and explore the neighborhood," Lopez said. "If you have discounts or something to offer folks, let us know so that we can drop that into the scavenger hunt in real time."

Another initiative is to sell T-shirts emblazoned with the words "Hope will never be silent" — a quote widely attributed to the late gay Supervisor Harvey Milk, though it is unclear when he first said it. Milk founded the street fair in 1974. The proceeds from shirt sales will be donated to the fair's 2019 nonprofit partners, Lopez said.

"Obviously we will not be making $50,000 this year, but we wanted to make a couple of dollars [for the nonprofits]," Lopez said, adding that instead of T-shirts, people can also purchase the design on a "very sexy" hoody.

Finally, a social media campaign will encourage people to share past photos of the fair with the #CastroStreetFair, "making people remember how awesome it is."

Touchless trick-or-treat for kids
The Castro Street Fair isn't the only annual October event changed by the pandemic. Jenn Meyer of LocalTake on 17th Street is encouraging businesses to participate in a socially distanced trick-or-treating for kids from 2 to 5 p.m. Saturday, October 31.

To be listed on an online map, businesses have to let Meyer know by October 10.

"This will not only bring some needed joy for children and their parents but will also draw foot traffic to the neighborhood," according to a September 30 Castro Merchants email. "Create a spot clearly marked for the child to place their bag and step away. Have an employee available to drop the candy in the bag, staying at least six feet away from the child. Adhere to all COVID safety protocols already established for your business. Parents will be told to take the candy home and sanitize each piece before giving to child."

Meyer did not respond to a request for comment.

Extended hours for parking meters considered
Hank Wilson, head of curb management for the San Francisco Municipal Transportation Agency, gave the merchants a presentation about the potential benefits of extending the hours of parking meters in the neighborhood to Sundays and after-hours on other days of the week, as is already done in some other neighborhoods such as the Embarcadero.

Wilson said SFMTA data shows extending the hours of parking meters beyond 6 p.m. will free up parking in the neighborhood. He did say, however, that if Castro neighborhood businesses are opposed to the idea then the SFMTA would listen.

"The idea here is we'd like to go get merchants groups like in the Castro, North Beach, and [on] Valencia [street]," Wilson said. "It's not a proposal to convince anybody of anything. That's why we are bringing it to you first. Is this something you're interested in? ... If you can all say 'nope, we're not into this,' then that's the input we're looking for."

Terry Asten Bennett of Cliff's Variety is opposed to the idea, as were other commenters in the Merchants' Zoom comment box, who claimed it could lead to less business in the area.

"We have tried Sunday meters in the Castro before, this was not good for the merchants," she wrote (and gave the Bay Area Reporter permission to publish). "It was damaging to what we try to cultivate in the Castro experience."

Deanna J. DeSedas, the interim director of communications, marketing and outreach for SFMTA, chimed in to say that businesses in the Western Addition, such as in Japantown and in the Fillmore, were more supportive and asked Castro Merchants President Masood Samereie if he could send a "two-to-three question survey" to members to get their thoughts.

"It's also something you can test," DeSedas said. "It's not a commitment forever."

Wilson said that this move was not about expanding revenue to the city's coffers, which are bleeding due to the ongoing COVID-19 pandemic.

"[Revenue from meters] is very negligible," Wilson said. "Meters are there because they are the best way to create parking."

Mandelman calls out landlord
Gay District 8 Supervisor Rafael Mandelman touted his recent work on the city budget, which he called "Act I of a multi-act play" as the city discovers just how much tax revenue is declining as a result of the COVID-19 pandemic and its attendant shutdowns and limitations of business activities.

Mandelman also highlighted legislation he introduced with District 3 Supervisor Aaron Peskin, which passed the Board of Supervisors September 29, that waives outdoor business fees until 2022.

"I think there is a recognition that people need some certainty about these things," Mandelman said. "[Outdoor operations] are both lifelines to the businesses and benefits to the neighborhoods they are in."

Mandelman said that he is hearing great stories about landlords cutting slack to tenants in the recession, but that not everybody has been such a good actor.

"We've had a few, in particular, Stephen Wong and Golden Pacific Properties LLC," Mandelman said. "[Aide] Tom [Temprano] and I made many efforts and got Senator [Scott] Wiener involved and got kind of a 'screw you' response from him. I think that's an example of a landlord who has no idea what's going on."

Wong owns property at 2323-2335 Market Street and has four commercial tenants, according to a letter to Wong that Mandelman and Wiener wrote and which Mandelman's office made available to the B.A.R. The four tenants are Kenneth Wingard, Stag & Manor, Crystal Way and D&H Jewelers, the B.A.R. confirmed with Mandelman's office on Thursday, in addition to one vacant commercial space on the property owned by Wong.

Wong bought the properties in February, according to property records. He did not respond to a request for comment.

"Your current tenants are a wonderful mix of neighborhood-serving retail stores, the kind that have made the Castro a welcoming place to live and visit for decades. These queer-, women-, and Black-owned businesses reflect the diversity of the neighborhood and have invested their time and money into enlivening a struggling retail corridor in the neighborhood they love. These are the sort of businesses and business owners that, as a property owner in this neighborhood, you should do everything you can to retain," Mandelman and Wiener stated in the September 2 letter.

"While we certainly acknowledge the costs you face as a business owner, we have both spoken with many other commercial landlords who have been able to come to temporary arrangements with their tenants to reasonably share the economic burden of an ongoing public health crisis," they added.

Pace of reopening
Mandelman said that the Shared Space on 18th Street has provided a lifeline to neighborhood businesses and employees, and said that as the COVID-19 positivity rate for tests goes below 2% — "about as low as it's been since I've been checking it" — further reopening is likely to occur.

Just September 30, restaurants were allowed to open indoors at 25% capacity up to 100 people. Churches, too, were included in the updated health orders as the city faced the threat of U.S. Department of Justice action.

"We've made good progress but that will all go away if people take off their masks and gather in large numbers and act like idiots," Mandelman said.

On September 25, Mayor London Breed announced a new permit for amplified sound for outdoor entertainment events. Activities that need this permit include live music like a band or DJ; theater, comedy or dance performance; fashion shows; amplified speech; amplified sound without a performer, like pre-recorded music or sound on a patio and film/TV screenings with amplified sound, according to Shannon Amitin.

"If the numbers continue to be good — and I'm hesitant to say it — we may be able to have indoor [musical] performances before a vaccine," Mandelman said. "We'll see."

"We'd like to do it and have been coming up with a different strategy of how to do the toy drive," Caltagirone said. "Families need it. The kids need it and we need to find a way."

Caltagirone said that the Walgreens at 18th and Castro streets is seeing increased cases of theft.

According to multiple meeting participants, word has gotten out it is the only Walgreens in town without a 10B SFPD officer there. (A 10B officer is an SFPD officer paid by a private party on their time off to provide security.)

Bennett said that the problem of petty crime in the neighborhood has led to gates being put up at Cliff's. As the B.A.R. previously reported, Cliff's was vandalized July 14, one of many neighborhood businesses to have had property destroyed in recent months.

"We're done; it's exhausting," Bennett said. "The things my managers had to clean out of the doorways every morning nobody should touch."

Mandelman took pains to clarify that homelessness should not be equated with crime, but unfortunately police are currently among the only people who can respond to both.

"I'd love it if we had a robust public health infrastructure," Mandelman said. "But the reality here in San Francisco right now is we don't have that. We are not there but I don't think that means we allow violent behavior to go unchecked."