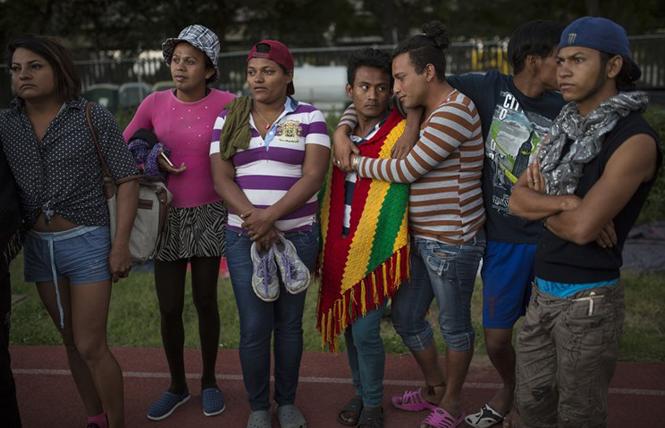 LGBTQ migrants stand on the racetrack at the Jesus Martinez stadium, which was turned into a makeshift shelter for the migrant caravan in Mexico City in 2018. Photo Credit: Courtesy Rodrigo Abd/Associated Press

The Department of Homeland Security and the Department of Justice are currently reviewing the Trump administration's proposed overhaul of the asylum system, "Procedures for Asylum and Withholding of Removal; Credible Fear and Reasonable Fear Review." Public comment closed earlier this month.

The proposed changes appear to target three groups: Central Americans fleeing gang violence; women fleeing domestic abuse; and LGBTQ people, Human Rights Watch pointed out in its criticism of the proposed changes back in June when the White House published the proposal.

If approved, critics warned that the proposal will alter the American asylum system, blocking many people seeking refuge in the U.S. from gaining entry, particularly those making gender-based claims.

The draft proposal also eliminated any mention of contraception and narrowed the framing of human rights, reported ProPublica.

Proposed changes to immigration
Aaron Reichlin-Melnick, policy counsel at the American Immigration Council, described the Department of Homeland Security's proposal as "the death of asylum."

Bill Frelick, HRW director of refugee and migrant rights division, raised the organization's objections to the proposed changes in a letter to Lauren Alder Reid, assistant director in the office of policy for DHS's executive office for immigration review, the same day the document was published.

Frelick noted that the changes that would "eviscerate" the asylum system were built upon three years of the Trump administration's executive orders, proclamations, and regulations that have undermined refugee protections.

The protections "that have been enshrined in international law since the close of World War II," he noted in the letter.

An estimated 4,385 LGBTQ asylum seekers have claimed asylum in the U.S. from January 2007 to November 2017, according to exclusive data obtained by NBC News through a Freedom of Information Act request to United States Citizenship and Immigration Services. The largest group of LGBTQ asylum seekers came from three of the most violence-ridden Central American countries: El Salvador, Guatemala, and Honduras.

NBC compared the data with the Citizenship and Immigration Services' Asylum Division Quarterly Stakeholder reports, discovering about 1 in 12 U.S. asylum requests from Hondurans claimed persecution due to belonging to a "particular social group," the LGBTQ community.

Venezuelan Daniel Fernandez is one of the thousands of LGBTQ asylum seekers affected by the Trump administration's immigration policies. He applied for asylum in October 2019.

In usual times, Fernandez would have a strong case for asylum. Instead, he's currently stuck in limbo at the U.S.-Mexico border due to the Migrant Protection Protocols, also known as the "Remain in Mexico" program, implemented January 25, 2019 by the Trump administration.

It's been 10 months and he's had five delayed immigration court hearings. The most recent one was canceled July 27, reported NBC News. Fernandez continues to wait for a hearing in immigration court in the Coahuila state of Mexico, known for its gang activity.

Fernandez was diagnosed with AIDS when he applied for asylum at the border. He has not been able to obtain consistent medical treatment since acquiring HIV in Venezuela, NBC reported.

Scott Weaver, Fernandez's attorney, said that U.S. border and immigration officials are going against the DHS' "Guiding Principles for MPP."

Trump's immigration proposal hasn't yet been approved. No date has been set, reported NBC News.

ProPublica reported that USAID staff were instructed by Timothy Meisburger, USAID's director of the Center of Excellence on Democracy, Human Rights, and Governance, to "keep in mind" to "faithfully execute the policy of the current administration."

Some experts pointed out an oversight in the new policy that goes directly against the 2017 Automated Directives System rulebook that guides the agency's functions. A section dealing with gender in the rulebook specifically addresses LGBTQs, including intersex and emphasizing gender identity, when conducting analysis.

Other experts noted that the revised policy uses the term "unalienable rights," in a way that excludes LGBTQ rights, echoing the Commission on Unalienable Rights, a conservative panel launched at the State Department in 2019.

The commission's draft report to the State Department put forward the right to property and religious liberty as the top two rights. The report also derided same-sex marriage, describing it as a "divisive social and political" controversy, reported ProPublica.

The draft policy's release was pushed back multiple times by USAID officials, unnamed sources told ProPublica. Its initial release was scheduled for late 2019 but was delayed. Its release was delayed again partially due to the global novel coronavirus pandemic.

Markham noted since 2012 the policies made progress to maintain "technical advances or knowledge." These newly proposed policies don't do that.

To review the "Procedures for Asylum and Withholding of Removal; Credible Fear and Reasonable Fear Review," click here.