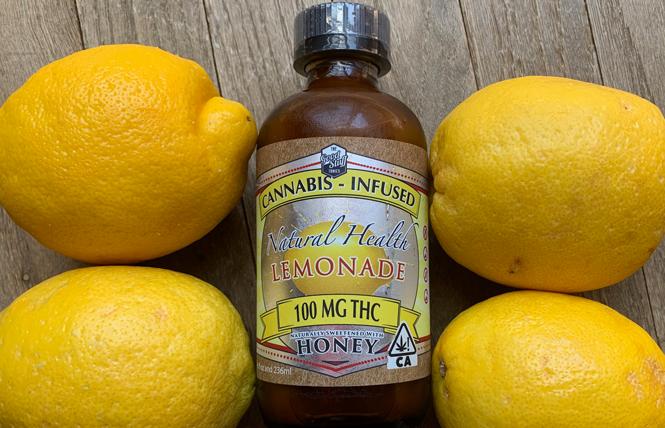 With infused beverages being one of the fastest growing categories in the cannabis industry, most dispensaries are now selling a variety of summer-themed ones.

I haven't tried all of them, but after I tasted Weird Science Labs natural honey lemonade, I ordered a case of their 100 mg 8-ounce bottles. At a price of $12 (plus taxes) from delivery-only company, Flower Company, that comes out to be a bargain at less than $1.50 per 10 mg serving. Since sipping on a drink that's not even an ounce leaves you wanting more, I find it more interesting to add the dose to a glass of homemade lemonade and ice.

If you try it and like it, heads up: it flies off the shelves at Flower Company, so when you see it on the menu, do not delay. When lemonade is out of stock, Flower Co., which seems to always have the best every day prices in the Bay Area, has other options, roughly twice the price per serving, including

"In the midst of a global pandemic causing many businesses to close their doors, cannabis shops and delivery services are thriving," said the report.

Reflecting national trends, Herb, a Southern California cannabis delivery service, said it had "experienced a roughly 75% increase in sales this spring compared to the same time last year," according to CEO Bobby Vecchio, "and as much as a 300% increase in the wake of big announcements concerning the pandemic."

The new Green State report "reflects a national trend," it said. This March, retail sales of recreational marijuana in California jumped 160% above what they were at the same time last year, according to surveys acquired by Statistica, as well as similar studies in Washington and Colorado.

The report says that while "most states have begun to reopen in the past few weeks, California remains highly impacted by the virus."

This long quarantine may cause an increase in demand for cannabis delivery, the report concluded.

SF cannabis office issues bulletin
On July 1, the San Francisco Office of Cannabis warned companies that upcoming demonstrations could lead to further burglaries, following the targeted attacks on dispensaries during the protests against racism and police brutality in May. In a bulletin, the office wrote that future protests could create a "strain on police resources" and the agency advised companies to consider moving inventory to different locations "to prevent theft during a disaster." It also advised businesses to avoid confrontations with intruders and call 911 if necessary.

More states expected to legalize cannabis
In late June, the Dow Jones financial newspaper, Barron's, wrote that although the coronavirus pandemic has slowed a number of states' efforts to legalize cannabis in the short term, "it could have the opposite effect in 2021." According to the publication, last December 16 states had expected to put pot legalization on their ballots this election year. But the list has dwindled, as COVID-19 dominated officials' attention, slowing down ballot initiatives. According to Canaccord Genuity analyst Bobby Burleson, budget shortfalls in states that shut down, especially ones that have been weighing legalization already, may soon have the motivation to legalize cannabis to bring in tax revenue.

Industry tries to diversify
The business magazine Forbes reported on efforts to make the cannabis industry more diverse. According to a recent article, Mary Pryor co-founded Cannaclusive as an effort "to facilitate fair representation of minority cannabis consumers." Cannaclusive offers resources to challenge the "whitewashed weed industry" such as a free stock photography gallery dedicated to diversity and the InclusiveBase, a directory of people of color who are leaders in the industry. For further information on their mission and work, go to www.cannaclusive.com