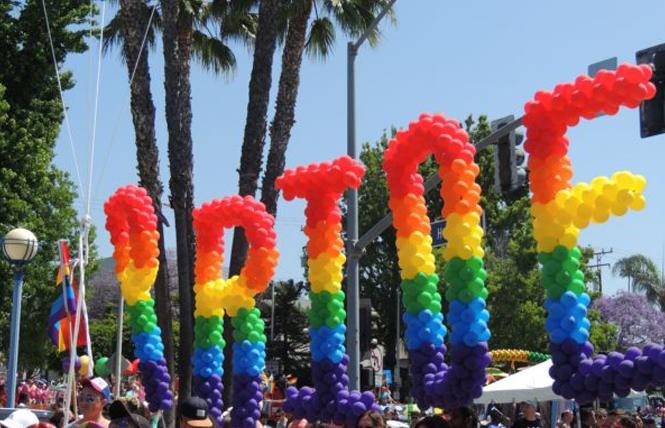 While this year's Pride in-person parade had initially been canceled due to COVID-19, the Los Angeles Pride organization announced June 3 that it will be holding an event after all — a march in solidarity with Black Lives Matter.

Pride events began in Los Angeles, and other cities, as a protest against discrimination and police violence. Now, 50 years later, the Los Angeles Pride solidarity march will go from the intersection of Highland Avenue and Hollywood Boulevard — near where the first LA Pride took place — to the intersection of Santa Monica and San Vicente boulevards in West Hollywood.

The march will take place Sunday, June 14, at 10 a.m., according to an article in the Los Angeles Times.

Estevan Montemayor, a trans woman who is the board president of Christopher Street West, which puts on LA Pride, said that protests are essential activities and should take place in spite of the novel coronavirus outbreak that led to so many Pride cancellations.

All the demonstrators are asked to wear face masks at all times, in accordance with public health guidelines. The city of West Hollywood has a mask requirement similar to the one instituted in San Francisco on Friday.

New York City Pride also announced June 3 a "rally to center on racial justice." The New York event, however, will occur virtually and not at the same time the Pride parade would have occurred.
The virtual rally will occur at 2 p.m. Pacific Time Friday, June 26, and will be streamed on YouTube and Facebook.

It will be hosted by trans activist Ashlee Marie Preston and trans actor Brian Michael Smith.

"I'm beyond excited to co-host the digital rally with NYC Pride this year," said Preston in a news release. "The current socio-political climate around LGBTQ rights is similar to that of the 1960s; but our commitment to shattering systemic barriers that impede our ability to thrive is exactly the same as it was for our foremothers — Marsha P. Johnson and Sylvia Rivera. Poisonous policies, patriarchal power, nor the pandemonium of a pandemic will thwart our progress."

Johnson and Rivera were New York-based trans activists who took part in the 1969 Stonewall riots that kicked off the modern LGBT rights movement, and the anniversary of which Pride commemorates.

San Francisco Pride has not responded to a request for comment. The City by the Bay has been the site of several protests in solidarity with Black Lives Matter over the past week, after an international outcry was sparked by a video of the Memorial Day killing of George Floyd, a black man, by a white police officer who knelt on his neck for more than eight minutes.

Protests in the Bay Area have occurred in spite of orders to shelter in place to slow the spread of the novel coronavirus. In response to nighttime looting downtown late May 30, Mayor London Breed instituted an 8 p.m. curfew in San Francisco. Other jurisdictions followed suit.

Tensions have been high nationwide as peaceful protests have not only been accompanied by looting, but have been met with police violence themselves.

At least one member of the San Francisco LGBT community thinks that San Francisco should also have a march in solidarity with the Black Lives Matter movement.

Okan Sengun, the founder and executive director of the LGBT Asylum Project, which this year is an organizational grand marshal for the SF Pride parade (which, like LA Pride, was also holding its 50th anniversary and was also canceled due to COVID-19), said he hopes San Francisco Pride considers the option.

"This is exactly what I have been thinking about this year's San Francisco Pride," Sengun wrote on Facebook. "We are not in the mood to celebrate or talk about LGBT rights event after event this month when the black community is being subjected to such brutal and endless police violence due to decades long racism in this country! Injustice to anyone is injustice to everyone! We need to get together and we need to focus our efforts on Black Lives Matter right now!"

Sengun elaborated on these comments in a statement to the Bay Area Reporter on June 3.

"I applaud LA Pride for taking the historic steps of turning this year's Pride march into a Black Lives Matter march," Sengun wrote. "It's my sincere hope San Francisco will consider doing the same. ... Injustice to anyone is injustice to everyone! We need to understand the constant fear that our African American brothers and sisters are experiencing every single day when they leave their houses just because of their skin color!

"Now is the time to stand united as a community," he continued. "We need to come together and dedicate all of our forces, compassion and resources to the Black Lives Matter movement and we need to do this RIGHT NOW!"

The San Francisco Pride organization has faced ongoing criticism for the participation of police departments in its annual celebration. Just last year, protesters against police and corporate participation in the parade delayed it for about an hour.

As the B.A.R. previously reported, leaders of the San Francisco LGBT Pride Celebration Committee struck down a proposal to prevent Google, YouTube, and the Alameda County Sheriff's Office from participating before this year's parade was canceled April 14. 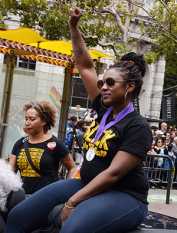