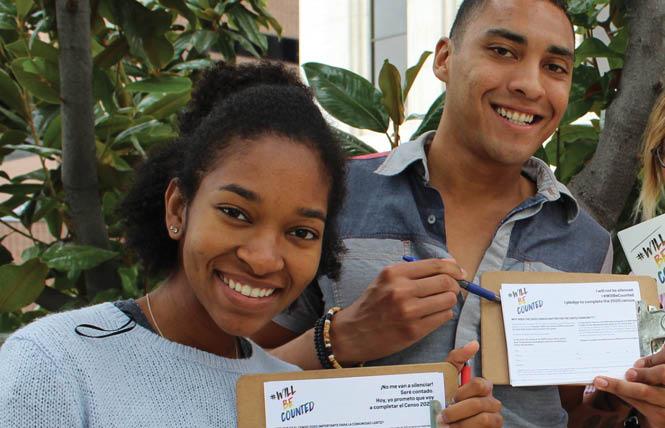 With billions of federal funding at stake and California at risk of seeing its congressional representation diminish, the state's LGBT residents are being urged to fill out their 2020 census forms. Doing so is being pitched as a way to not only protect the Golden State's political clout and financial resources but also as a protest against the Trump administration's rollback of federal LGBT rights and protections.

During the Obama administration, a working group of federal agencies had been looking at including questions about sexual orientation and gender identity on the 2020 census form but the final decision was left up to the administration of his successor. And in March 2017, nearly two months after President Donald Trump took office, the U.S. Census Bureau confirmed the forms would not include SOGI questions, causing an uproar among LGBT groups and federal lawmakers supportive of seeing the census collect SOGI data.

Since then LGBT groups and advocates have been using the hashtag #WillBeCounted on social media platforms to drum up awareness about the importance of taking part in the census despite the lack of the SOGI questions. It is especially critical in California, where for the first time in the state's history it could lose a House seat in Congress because the state's population is no longer growing as fast as several Western and Southern states that are expected to pick up House seats next year.

Not only is the census population count used to allocate House seats to the states, it also determines funding for myriad social services, from food stamps and Medicaid to Section 8 housing vouchers and community health centers.

Equality California, the statewide LGBT advocacy group, on its website is asking people to pledge that they will fill out their census forms this spring. For the first time people will be able to do so online, or they can return the printed forms that will be mailed to them by April 15.

"Thank you for taking the pledge and letting the Trump-Pence administration know we #WillBeCounted!" states a note that pops up on the screen of those who fill out the online form.

Pledge to be counted
Starting Wednesday (January 22) EQCA will be running ads on Facebook and the hookup app Grindr to encourage people to sign the pledge. It is part of a $1 million campaign the agency is undertaking this year to ensure LGBT people fill out the census.

"The 2020 census is nothing less than a fight for our future — a future that values diversity and invests in the communities that need it most," stated Equality California Institute Executive Director Rick Zbur. "Too often, California's diverse LGBTQ community is undercounted — which denies us power, representation and funding for programs that the most vulnerable members of our community need to survive. There's far too much at stake to allow that to happen in 2020. LGBTQ Californians will be counted."

"Right now we are just asking people to pledge to complete the census. In March, we will be doing follow up outreach to people to remind them to fill out the census," said EQCA spokesman Samuel Garrett-Pate.

EQCA has been working with a coalition of LGBT groups around the state to prepare for this year's census. A major awareness drive was conducted last year at Pride events across the Golden State.

"I think people were both receptive to the idea of being counted and that this is important for these services that are important to me and the community," said McAllister-Wallner, adding that the Trump administration's attempts not to count LGBT people in various government surveys also registered. "They are attacking you at the federal level constantly and this is an opportunity to fight back and demand I will be counted in the census. It is a way for people to say, 'You can't erase me. You can't erase my community.'"

Despite the lack of SOGI questions for LGBT individuals, there does not appear to be a concerted effort to depress LGBT participation in the 2020 census, according to half a dozen LGBT leaders the B.A.R. spoke to about this year's count. Rather, there seems to be a broad recognition within the LGBT community of the critical importance for filling out this year's form.

"We need to be counted as a community. We need to know we exist," said Miguel Bustos, a gay San Francisco resident who serves on the California Complete Count Committee and is the senior director of the Center for Social Justice at GLIDE SF.

The Bay Area Reporter will have more about efforts to ensure LGBT Californians take part in the 2020 census in its January 30 issue.