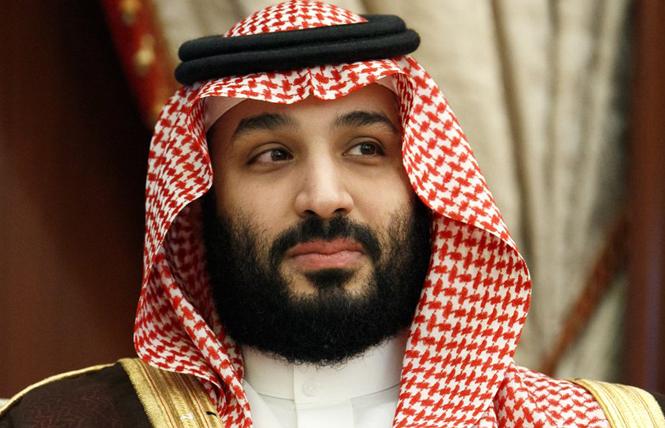 Two gay Saudi journalists, who claim they were outed in retaliation for contacts one of them had with a foreign media outlet, have been detained in Australia after requesting asylum.

LGBT advocates are calling upon the Australian government to release the two men, who fled Saudi Arabia after realizing they were being targeted by the regime of Crown Prince Mohammed bin Salman.

NBC News reported that the men arrived in Australia more than a month ago. After they picked up their luggage, customs authorities inspected their bags and phones and asked them if they intended to seek asylum. When they said yes, they were taken to a detention center where they have mostly been held since, one of the journalists and his attorney, Alison Battisson, said.

The men, who were not named, have been together for 16 years.

Homosexuality is illegal in Saudi Arabia and punishable by death.

Just Equal spokesman Brian Greig said in a November 17 news release that since the men's arrival they have been interrogated by authorities, intimidated by the guards, and threatened with violence by other detainees.

"It is unacceptable that LGBTI people escaping threats and detention overseas are then confronted with that here," Greig said in the release.

One of the men told the Guardian that they ran from the Saudis after being imprisoned and threatened with trumped up charges of leaking negative stories about the regime, only to re-experience a similar situation in Australia.

One of the men, who worked with many foreign reporters in his position at the ministry of media and often defended the regime in the international press, denied the Saudi regime's charges.

The Saudi government cracked down on dissidents in 2018. The men claim they are not dissidents and said the government became suspicious of any journalists' contacts with other reporters who were critical of the regime.

The Guardian reported that the one man was targeted by the ministry after a foreign media crew obtained and smuggled incriminating documents of the regime's mistreatment of journalists out of the country in 2018.

Purportedly, the intention was to pass the documents along to Washington Post journalist Jamal Khashoggi, who was slain at the Saudi consulate in Istanbul last year.

Prior to escaping their home country, the two men told the newspaper that they "lived a comfortable life of relative wealth and privilege in Riyadh."

"Australia must be a safe refuge for people fleeing persecution, including anti-LGBTI hate and violence," Greig said.

"This must also include a fair, efficient, and unbiased process for dealing with claims of asylum on the basis of sexuality," he added.

Rights group urges Ugandan authorities to stop harassment
Human Rights Watch has urged Ugandan officials to stop harassing and torturing LGBT Ugandans and to drop all charges against the LGBT community members who were caught up in two recent raids.

"Ugandan police are stooping to new lows in their persecution of people for being LGBT," said Neela Ghoshal, senior LGBT rights researcher at Human Rights Watch, in a November 19 news release from the organization.

Joan Amek, who was arrested during a raid on the Ram bar, told HRW, "After the drug accusations failed, they accused us of being idle. But there is no crime, they just need something to pin on people."

"Ugandan police should be protecting people, not violating their rights because of their presumed sexuality or gender identity," said Ghoshal.

On November 10, Ugandan police rounded up an estimated 120 people during an early Monday morning raid on the gay-friendly bar in Kampala.

Police charged 67 of the people arrested with "public nuisance" and violating the Tobacco Control Act 2015, which prohibits smoking opium and shisha. Police released 53 people after dropping all charges against them, according to SMUG.

The people still detained are being held at a maximum-security prison in the suburb of Luzira. They could face up to a year in jail if sentenced, the group's lawyer Patricia Kimera told Reuters.

A person identified only as Sonia, who was one of the bar patrons arrested, recounted to Gay Nation that the police swarmed the bar and ordered everyone to sit down.

She asked a police officer what people were doing that was wrong.

"I got slapped for it," she said, stating that the officers slapped some of her friends for asking the same question. Some officers were reportedly using homophobic slurs during the arrest.

The bar patrons were later put into police trucks and taken to the central police station. They still hadn't been informed of what they had done wrong, Sonia said.

Another individual also arrested during the raid on the bar and identified as Judy added that many people's lives are forever changed because family members "don't want anything to do with them." Some nearly lost their jobs.

They "don't think they have a life to come back to" she said. "I and my friends can't even have decent sleep because our minds can't rest."

The raids on LGBT venues in Uganda coincides with a particularly violent year of attacks on the community — including a false threat to revive the so-called Kill the Gays Bill — and brutal murders of some LGBT people.